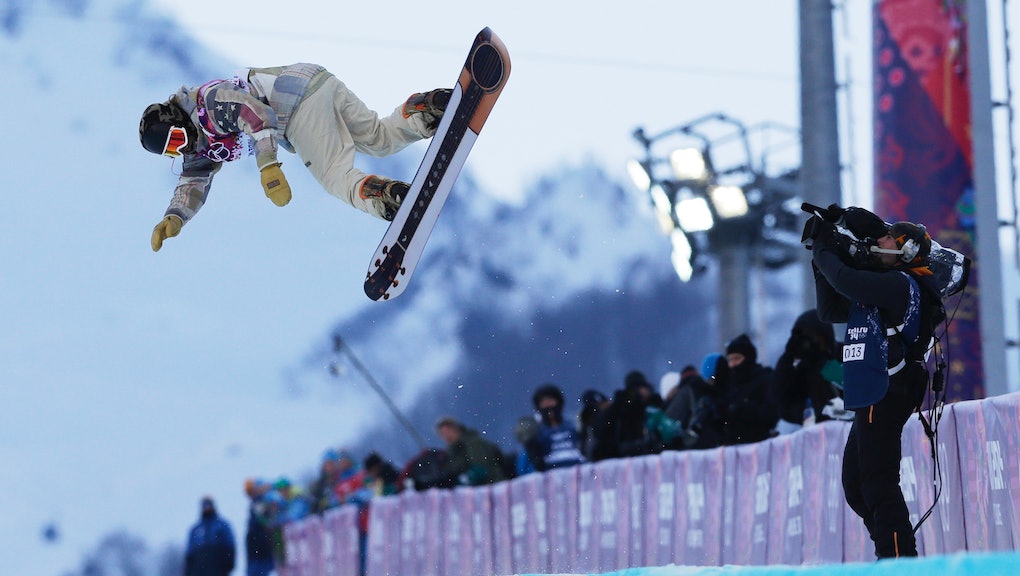 Why Some Olympic Athletes Choke, While Others Are Unstoppable

Much of the coverage of the 2014 Olympic Games has been political. Yet there have been a few great plotlines in the events themselves, from the cross country skiier who lost his ski, to the figure skater who got "bullshit" scores, to the famous Shaun White who didn't manage to win gold this year.

Rewind. Why didn't he? More to the point, what can neuroscience tell us about why some Olympians pull off epic victories while others #fail?

All Olympians have brawn, but what separates the champions from the rest is the brain. This amazing organ is not only responsible for those moments of over-thinking and self-doubt, but it also plays a huge role in how well an athlete can perform. So while two-time Olympic gold medalist and snowboarding legend Shaun White has the track record, practice and athletic ability to pull off a third gold medal, he choked on the half-pipe last week for other reasons. Here's the full (neuroscience) story.

How Practice Changes Your Brain

Practice makes perfect. We have probably all experienced the satisfaction that comes with mastering a new skill. Whether it's learning to ride a bike, walking in high heels on snow or doing a YOLO flip on the half-pipe, you have your cerebellum to thank.

The cerebellum sits in the back of your head, near the brain stem, and is responsible for muscle memory. Of course memories are not stored in muscles, but the repetition of a task allows for a better connection between your brain and the muscles involved in the task.

"Better connection" might sound pretty abstract, but it's not. There are literal connections between neurons and muscles, also known as synapses. The neurons in your brain send an electrical and chemical signal to your muscles to initiate movement. The neuron spits out a neurotransmitter, acetylcholine, which the muscle cell uses to contract, causing movement.

The communication between neurons and muscles depends on the number and strength of synapses. Practice builds stronger connections, which allows the body to do what the brain tells it to do more quickly and with relative ease.

Once the task has been practiced so many times, it becomes automatic and you no longer have to think about it at all. So it takes iPod the same level of thought to perform death-defying jumps on icy vertical slopes with his feet strapped together as it does for most people to tie their shoes.

Grace Under Pressure in the Autonomic Nervous System

If practice makes perfect, then what are we to make of underdog Sage Kotsenburg's snap decision to perform a trick he had never done before and take home the gold in the half pipe?

His parasympathetic nervous system is awesome.

The peripheral nervous system consists of all the neurons that are in neither the brain nor spinal cord. Some of these peripheral nerves control movement (somatic) and others control things we don't think about (autonomic) like breathing.

Kotsenburg's ability to keep his fear in check likely allowed him to make a spur of the moment decision that turned out well for him.

So what did happen with Shaun White? He practiced. He seems pretty chill. But he still choked.

His muscle memory got hijacked by his frontal lobe because he cared too much.

In a surprising study from Caltech, big rewards often make for poor performance. In this experiment participants played a game and after a few rounds they were told they would be increasingly rewarded with $0-$100 for winning. While on the low end of the reward participants performed better, but once they were closer to the $100, they choked. Functional brain imaging revealed that at a certain monetary value people stopped thinking about the reward and started worrying about losing it. This correlated with more brain activity in the frontal lobe, which is associated with higher thinking. They got out of "the zone," started second guessing themselves and performed badly.

Athletes thrive because of their ability to perform a task flawlessly through motor memory, i.e. not thinking about it at all. When Shaun White moved his efforts away from his cerebellum and towards his frontal lobes, it was all down hill from there.

The neurological aspects of competition are often overlooked, but they play an enormous role is who wins and who loses. As Olympic gold medal gymnast, Shannon Miller, puts it:

"The physical aspect of the sport can only take you so far. The mental aspect has to kick in, especially when you’re talking about the best of the best. In the Olympic games, everyone is talented. Everyone trains hard. Everyone does the work. What separates the gold medalists from the silver medalists is simply the mental game."

Not only is this mental training important for athletes, but it really applies to all of us. Practice. Don't stress out. Don't over think it. It's scientific.