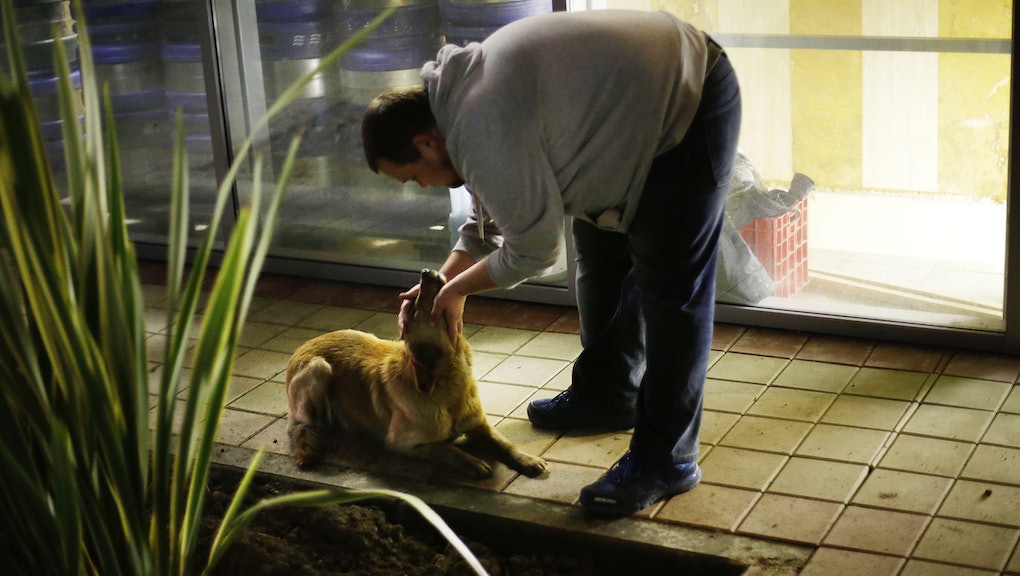 U.S. skier and silver medalist Gus Kenworthy is not the only one stepping up to save stray dogs in Sochi from being killed. Russian billionaire Oleg Deripaska has used his wealth to set up temporary shelters around the Olympic host city, saving around 140 dogs in the process. While thousands of feral dogs have already been put down by exterminators hired by Sochi organizers, these people are doing their part to save as many dogs as they can.

The work is being done by grassroots organizers, who have been sneaking dogs out of Sochi to safe houses and other temporary shelters, where they can stay until they are officially adopted. In salute to their work, here are 10 photos that capture them in action:

1. Volunteers have been picking up dogs in their own cars.

Activists like Igor Airapetian (above) have created a network to pick up dogs and take them to a rendezvous point, from which they can be driven to shelters.

2. Activists have to work quickly and in the dark, because Sochi officials discourage their work.

This Rottweiler has luckily been rescued.

3. Thousands of dogs have been killed in Sochi.

4. Most of these dogs are not violent.

While stray dogs are common in Russia, the population soared around Sochi because workers actually kept many around as guard dogs. They were fed and trained to protect the new buildings, but after the construction was completed, these dogs outlasted their usefulness and were cut loose. Now they are being hunted by the same organizers that once used them.

When volunteer Alexei whistled at this Labrador mix to come over, it quickly jumped into his arms.

Alexei and his wife drove the dog — as well as few others that they picked up at safe houses — to the rendezvous point.

7. These activists are working by themselves to rescue the strays.

8. They bring dog food and medicine as well.

The supplies are given to safe houses and temporary shelters so that the dogs will be well-kept until they are adopted into permanent homes.

9. These dogs will eventually be taken to Moscow.

They have a better chance of being adopted there.

10. Americans can adopt strays from Sochi as well.

If you are interested in adopting a dog from Sochi, check out Humane Society International's tips here.