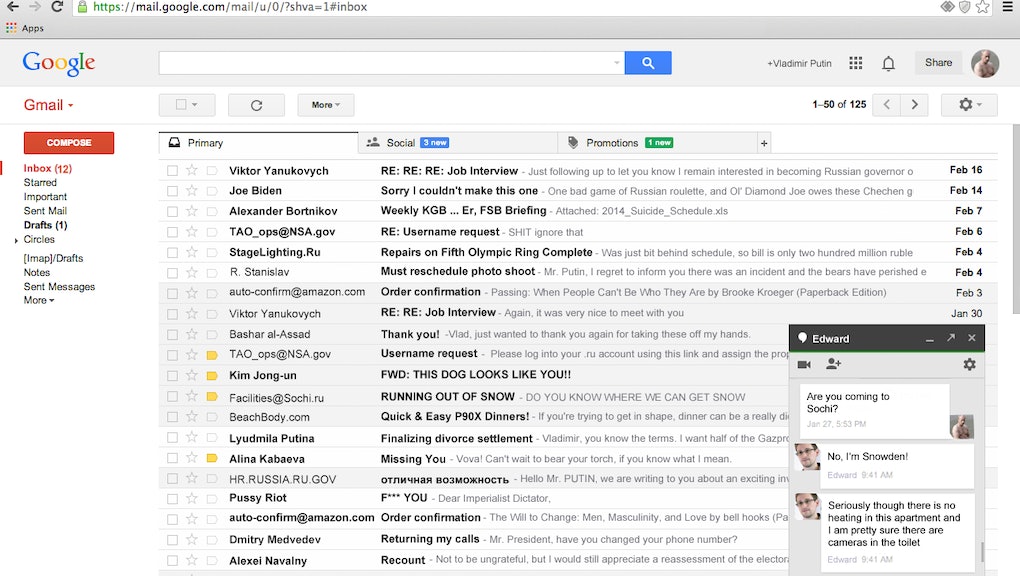 Don't recognize some of the names or references on the list? We've got you covered. Check our key below:

Viktor Yanukovych: As the final days of the winter Olympics in Sochi run down, beleagured Ukrainian President Viktor Yanykovych has cracked down harshly on protesters in the capital of Kiev, with dozens feared dead. Yanukovych's pro-Russian government has been steadfastly backed by his friends in the east, and some suspect that his meeting with Putin during the Sochi opening ceremonies was an ominous precursor to the violence.

Joe Biden: Ol' Diamond Joe owes some Chechen gangsters about 800 feet of copper wire. Also, he needs someplace to crash for a week or two. He'll be really chill about it and will even chip in for a 24-pack of Milwaukee's Best and some good bud, if you're down.

Alexander Bortnikov: Head of Russia's Federal Security Bureau (FSB), formerly the KGB. When someone turns up suspiciously dead in London, it's probably best not to ask him too many questions about it.

TAO_ops: The NSA's Tailored Access Operations division is comprised of old pros at breaking into any computer system the U.S. government wants — even those of our allies.

StageLighting.ru: Come on, you can't have missed this.

R. Stanislav: The name is made up, but the bears are not.

Bashar al-Assad: Though it's taking a while, Russia is helping Assad get rid of some pretty nasty toys.

Facilities@Sochi.ru: They really are running out of snow.

Kim Jong-un: Likewise, THE DOG REALLY DOES LOOK LIKE PUTIN.

Lyudmila Putina: Putin's recent ex-wife. A common Russian joke goes: "According to the law Lyudmila now will get half of Russia."

Alina Kabaeva: Putin's rumored mistress who was part of the opening ceremonies this year, though he claimed he didn't have any role in it. Uh huh.

Pussy Riot: Free from Siberian ice-prison, the Russian band is still raising trouble for Putin. And getting whipped by Cossacks, which is still apparently a thing in Putin's Russia.

Willem-Alexander of the Netherlands: His special diplomatic year together with Putin went very, very badly. At one point "there was a non-stop campaign on Russian TV showing Holland to be a modern Sodom and Gomorrah, run by paedophiles and hashish dealers."