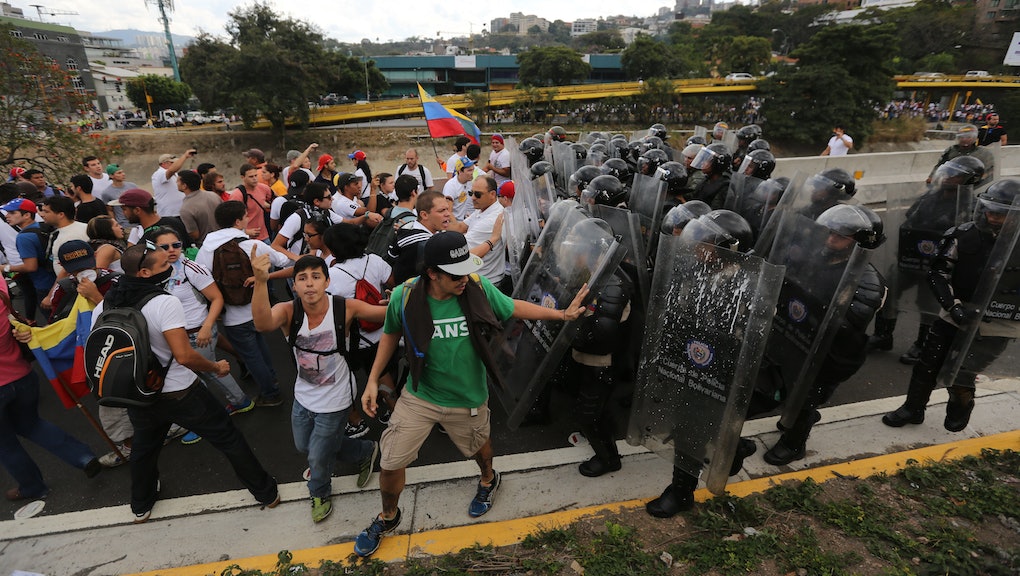 The Media Is Covering Up What's Really Happening in Venezuela

As a Facebook- or Twitter-crawling millennial, it's almost impossible not to come across images, videos and pleas for calm coming out of Venezuela (even if some of them are fake).

The protests in opposition to President Nicolas Maduro, which have claimed the lives of 13 people so far, began to highlight the very real grievances of runaway inflation, skyrocketing crime rates and shortages of essential goods. And much of the American/western press has already declared a verdict on who is to blame for Venezuela's myriad problems in that regard: It's the inevitable result of a failed 15-year experiment in socialist policy.

Is Venezuela a utopian society? Hardly. Government corruption runs amok, and there are no signs of crime peaking anytime soon. But an examination of one of the most common claims made by American pundits — that Venezuela's runaway inflation is solely the result of Chavista economics — shows that they're either blinded by free-market ideology, or are willing to omit unpleasant facts in an effort to demonize Venezuela's elected government.

A line snakes around the corner of a supermarket in Maracaibo, Venezuela [source: BBCNews]

To briefly illustrate how political the concerns of the American media currently are, how high was inflation was under Chavez's non-socialist, American chummy predecessor, Rafael Caldera, in 1996? The answer: 103.2%, almost double what it is today.

A Google site search of "Rafael Caldera + Inflation" on CNN's website turns up 80 results. Of those, only one, an outline of the 1998 elections, discusses Caldera and inflation in the same breath. Another is a Latin American market brief for investors. The rest are more recent articles lambasting Chavez for Venezuela's inflation, and simply mention Caldera in passing.

And what happens when you do the same search but replace "Caldera" with "Chavez"? 12,100 results.

So, what exactly is causing Venezuela's wild inflation?

Prevailing economic wisdom, of the type subscribed to by the the International Monetary Fund (IMF), holds that two major causes of Venezuela's out-of-control inflation are price controls and food subsidies. These, the theory goes, provide a disincentive for private businesses to keep investing in production. Thus, shortages occur and a black market is established to sell those goods above the price set by Caracas. As the Economist crowed in 2011: "Eight years after Hugo Chavez's socialist government imposed strict price controls on basic goods, Venezuela has the world's highest inflation rate to show for the effort."

This line of thought has one major flaw — it excludes the exploitative role played by Venezuela's private food industry. When examining the history, one finds that the political aims of business leaders in Venezuela and abroad substantially contribute to periods of high inflation.

In 2002, following the failed U.S.-assisted military coup against the democratically-elected Chavez, managers of the state oil firm Petroleos de Venezuela (PDVSA) instituted a lockout of workers, grinding the oil-dependent economy to a halt. As the lockout spread to other sectors of the economy, widespread food shortages began. This brief period saw an acute spike in child mortality and extreme poverty, figures that have steeply declined since Chavez instituted the reforms so derided by neoliberal economists.

Leopoldo Lopez, a Harvard-educated mayor of a wealthy district in Caracas, surrenders himself to government forces on Feb. 21 after an arrest warrant was issued for his involvement in organizing the most recent spate of protests. He was among a handful of politicians who signed the "Carmona Decree" following the 2002 coup d'état, dissolving Venezuela's democratic institutions after the brief ouster of democratically elected Hugo Chavez [source: Miguel Gutierrez/EPA]

The shortages put on vivid display just how dependent Venezuelans were on privately imported food. Then, Venezuela was forced to import 70% of its food, largely due to oligarch-friendly land distribution and a weak agricultural sector. According to a 1997 agricultural census, 5% of landowners controlled 75% of the land and 75% of landowners occupied just 6%. Much of the land remained unproductive.

In response to the lockout-induced hunger, the Chavez government established Mercal, a state-run distribution network that sold subsidized food to the poor. It also introduced lending regulations to commercial banks requiring that 21% of their gross portfolios be channeled toward agriculture development. These measures lead to a 24% increase in agricultural production, allowing Venezuela to become entirely self-sufficient in rice, corn and pork production by 2008. Its average caloric intake went from 91% of recommended levels in 1998 to 101.6% in 2007.

This shift toward self-sufficiency occurred as part of the Chavez government's commitment to "food sovereignty," an increasingly popular goal for developing nations worldwide. The concept is simple: Instead of transnational corporations and the "free market" (read: highly-subsidized U.S.-agribusiness) dictating how the global food system operates, those who produce, distribute and consume it should be at the center of decision-making.

The decision to move in this direction was quite prescient. Unequaled spikes in food import costs began plaguing third-world countries in the mid-2000s, largely from intense commodity speculation by Wall Street firms. For example, in 2006, U.S.-based agribusiness giant Cargill bought a substantial portion of the Mexican corn harvest, and hoarded its supply until the next year, by which time prices had more than doubled. From the end of 2007 to mid-2008, the global price of rice rose by 320%, corn by 250% and wheat by 210%, figuring prominently into the global food riots of 2008 — and the widespread starvation and misery that inspired them. As is quite common in transnational agribusiness, monopoly positions allowed major firms to manipulate prices.

As the food crisis destroyed many lives in surrounding nations, Venezuela was able to weather the storm better than most. This was due to strict regulations imposed by the 1999 Bolivarian Constitution that criminalized food hoarding, and the willingness of Venezuela to nationalize companies that broke the law. In 2008, the government found 13,000 tons of hoarded food in two weeks of state inspections. In 2009, it nationalized Cargill's rice-processing plant after discovering 18,000 tons of hoarded rice. Similar moves have been made in other industries accused of manipulating prices and scarcity.

On June 18, 195 tons of hoarded rice is discovered in Tachira state, bordering Colombia. Many hoarded goods are smuggled across the border where they can be sold for inflated prices [source: AxisOfLogic]

And here's where it gets interesting. When one looks at rises in scarcity since Chavez was brought to power, they correlate with the electoral cycle — implying that something more is afoot than just businesses worried about their bottom lines. Por ejemplo, the months leading to a December 2007 referendum on planned constitutional reforms saw the greatest period of food shortages during Chavez's rule. In recent years, the scarcity index soared ahead of the October 2012 presidential elections, cresting with news of Chavez's trip abroad for cancer treatment. Between November 2012 and June 2013, over the course of two general elections, over 40,000 tons of hoarded food was unearthed and the inflation rate reached its highest level since the pre-Chavez era.

Of course, traditional economists would argue that hoarding and speculation are the logical outcomes of price controls — i.e. that businesses are just rational actors responding to government dictates and trying to see their bottom lines remain stable or increase. But this supposes a false division between what guides the political and economic decisions of business leaders — one that can't be ignored in light of Venezuela's almost two decade-long history of political conflict between the socialist state and wealthy private interests.

So why is the American media deliberately obfuscating the role played by wealthy business interests in Venezuela? Maybe because if they didn't, their audience might start scrutinizing those same interests here at home.