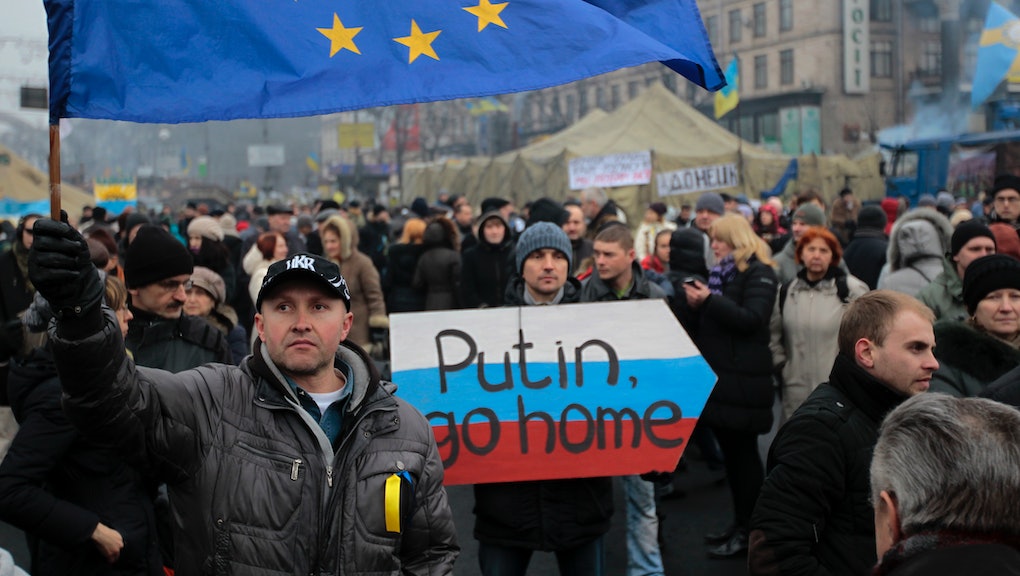 Over the past 48 hours, things have escalated fast in Ukraine. Russia began carrying out surprise military exercises, pro-Russian masked soldiers without insignia took over several keys buildings and areas in Crimea, Ukrainian forces were accused of attacking Crimea's Interior Ministry (although that might have been a false flag operation) and the Russian Parliament approved the use of military force in Ukraine. It's clear something serious is about to happen.

There's almost no way to know what will unfold, but here are a couple things you need to know about the situation:

Julia Ioffe points out that Russian President Vladimir Putin seems to do whatever he wants, whenever he wants. From an outsider's perspective, you might think there's no way Putin would invade Crimea right now. Russia's economy is in dire financial straits, Crimea is close to seceding from Ukraine anyways, and by invading Crimea, Russia could easily isolate itself politically and diplomatically from the rest of the world. But Ioffe says Putin might not care.

Let's talk more about the costs. The outcome of almost any actions by Russia at this point don't look good. Georgia's membership to NATO seems to have been fast-tracked, which would give the military alliance an extremely useful military outpost close to Russia that could house advanced weapons which could threaten Russia. This is especially problematic for Russia, since it's no longer the military superpower it once was. The army is largely ill-equipped and made up of poorly disciplined conscripts. If the Russian military were to face any legitimate opponent in a military clash, they'd likely lose. But, no sane country would want to start a legitimate war with a nuclear-armed Russia, and Putin knows this.

3. The International Community Does Not Support This

Almost everyone in the West has turned on Putin and Russia. Canadian Prime Minister Stephen Harper strongly condemned Russian military intervention in Ukraine, recalled Canada's ambassador from Moscow and plans to pull out of the upcoming G8 process in Russia. Australian Prime Minister Tony Abbott echoed the sentiment, calling Russia's actions "unacceptable" and telling the country to "back off." NATO Secretary-General Anders Fogh Rasmussen released a statement saying that Russia has violated the principles of the United Nations Charter, threatening peace and security in Russia while disregarding Ukraine's territorial integrity and sovereignty. And of course, President Barack Obama already held a press conference warning Russia of the potential and unspecified "costs" of any military intervention in Ukraine.

4. There's Nothing Anyone Can Really Do

Besides condemning the actions and warning against possible explicit and implicit embargoes, President Obama cannot really stop Russia from invading Crimea. Russia's military, though not a superpower, has enough power in the area to pose a real threat, but it's highly unlikely any real firefighting would break out. And while NATO, the U.S., Ukraine and a host of other international powers can warn Russia against its actions, as long as Putin is committed to an invasion, there's little that will stop him. The UN, on which Russia often relies when it wants to exercise its veto powers, could try to intervene, but would likely be ignored. Save an all-out war, there's almost nothing standing in Russia's way.

5. At This Point, Any Move is a Bad Move

While there's a strong pro-Russian population in Crimea, there are also large swaths of the population, specifically the Crimean Tatars, with a deep hatred for Russia, who will resist any Russia encroachment in their land. Sure, efforts might be futile at first, but Putin could be sowing the seeds for conflict for years to come. If Russia steps back (which is almost guaranteed to not happen), the country will feel deflated, but more importantly, the damage will have already been done. Russia's basically already shown its cards, and back-pedaling at this point will be tough. If Russia keeps moving forward, things are going to turn out badly for almost everyone. "Military intervention would be the beginning of war and the end of any relations between Ukraine and Russia," Ukrainian Prime Minister Arseny Yatseniuk told reporters.

6. Eastern Ukraine is Probably Next

Though Russia is usually a champion of non-interference, the diverse make-up of many eastern European countries means that people with Russian ethnicity and citizenship are scattered around various countries, and Russia believes that it has the right to trump a nation's sovereignty if it means helping its own people. That's part of the reasoning for invading Crimea and that the same logic and path the country would pursue if it were to invade eastern Ukraine, which is a highly likely possibility depending on what happens next in Crimea.