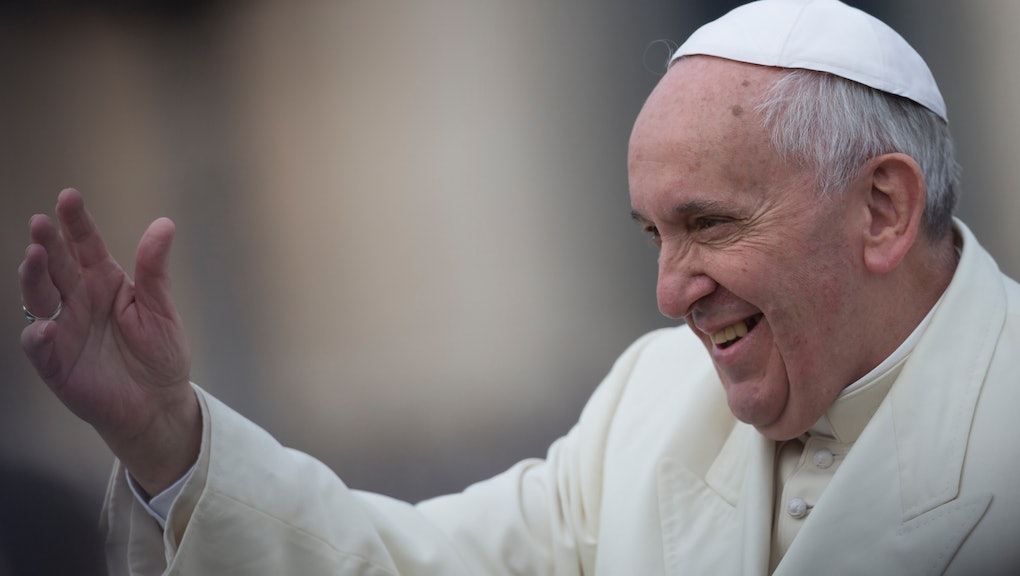 What Pope Francis Said About Civil Unions May Surprise You

Pope Francis obviously isn't for gay marriage, but how does he feel about civil unions?

Well, he wasn't explicitly positive, but he also didn't rush to judgment or rail against them like so many other Catholic officials before him. Here's the full statement, from Vatican Insider:

On the question of marriage and civil unions, the Pope reaffirmed that "marriage is between a man and a woman." States seek to justify civil unions "to regularize different situations of living together," pushed by the need to regularize the economic aspects between people, such as, for example, to ensure health care, he said. "We have to look at the different cases and evaluate them in their variety."

In other words, the Pope said that he could live with states regularizing and recognizing relationships between those of the same sex as a way of preventing them from slipping into poverty or losing access to health care.

How new is this stance?

According to gay rights activist and theology professor Marcelo Marquez, the pope told him he would support civil unions but not gay marriage when he was Argentina's Cardinal Jorge Mario Bergoglio. "He told me ... 'I'm in favor of gay rights and in any case, I also favor civil unions for homosexuals, but I believe that Argentina is not yet ready for a gay marriage law.'" At the same time the pope was railing against the legalization of gay marriage as "a destructive attack on God's plan," Marquez claimed. Andres Albertsen, a former pastor in Buenos Aires, confirmed that Bergoglio had made similar comments to him in a private meeting. And in 2010, Bergoglio apparently echoed the sentiment to a room of Argentinian bishops.

"Bergoglio — faithful to his moderate position — proposed continuing measured actions. ... He would suggest, also, that the church discreetly accept the intermediate alternative of the civil union — authorizing a series of rights (inheritance, social work) — that would not equate to marriage nor permit adoption," wrote Sergio Rubin, who is now Francis' biographer.

But don't mistake the pope's stance for social liberalism. According to theology professor Massimo Faggioli, Francis is instead recognizing that there are matter beyond the Church's purview, and perhaps while it has various views on such social developments, the Church can do more by focusing on other issues. While his stance is progressive as far as pontiffs go, keep in mind that it's still one far more conservative on social issues than even the consensus across the United States.