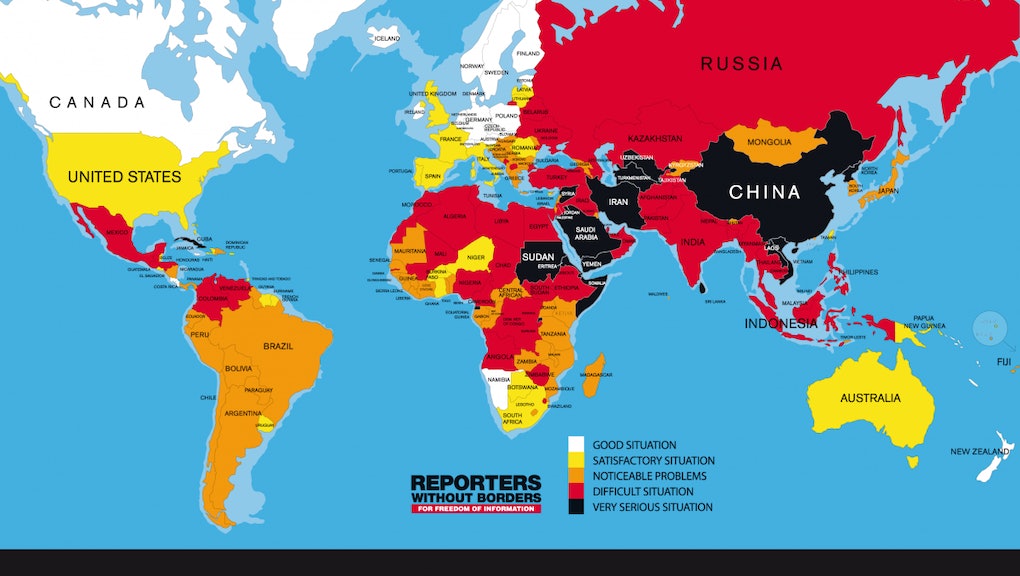 Twenty journalists from Al Jazeera are currently detained and facing trial in Egypt, accused of "spreading disinformation and abetting terrorists." But while these arrests have sparked a wave of international outrage, Egypt is far from the only country where press freedom is restricted, or the most dangerous environment for journalists in the world.

Last month, Reporters Without Borders released its annual World Press Freedom Index, and the picture looks as grim as ever. While Canada and Europe remain safe havens for journalists, the vast majority of countries were categorized as having "difficult situations" for the independent media. The countries with the worst news environments were centralized in East Asia, East Africa and the Middle East.

Here is a map that offers a broad look at how 180 countries stack up:

While the U.S. looks pretty good compared to the rest of the world, it actually plummeted down 13 spots in the past year to 46th place, below Papua New Guinea and Romania and just above Haiti and Niger.

Why did the U.S. experience "one of the most significant declines" in press freedom in 2013? Reporters Without Borders points to the U.S. government's intimidation tactics against journalists and whistleblowers, such as secretly obtaining the Associated Press' phone records. There have also been some high-profile cases, such as New York Times reporter James Risen suing for his right to protect his source and freelance journalist Barrett Brown getting arrested for using leaked material in his reporting.

"Freedom of information is too often sacrificed to an overly broad and abusive interpretation of national security needs, marking a disturbing retreat from democratic practices. Investigative journalism often suffers as a result," the report said.

Which other countries did the U.S. beat? The bottom of the list was rounded out by the usual suspects, such as China, Somalia, Syria, Turkmenistan, North Korea and Eritrea. Egypt was in 159th place, and other countries that are currently experiencing political upheaval had similarly dismal figures: Venezuela (116), Ukraine (127), Thailand (130) and Turkey (154).

In comparison, here are the top 25 countries with the greatest press freedom: