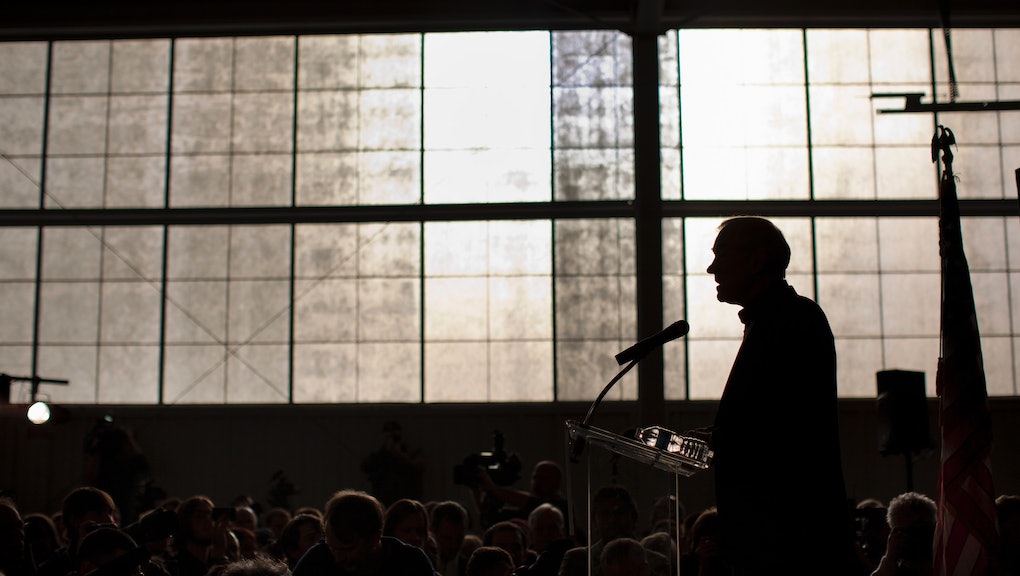 Ron Paul Sums Up What Most Young People Think of U.S. Foreign Policy in One Sentence

Libertarian hero and former Texas Congressman Ron Paul has a message for young Americans protesting the Russian annexation of what used to be the Ukraine's Crimean peninsula:

"What's the big deal? ... Why does the U.S. care which flag will be hoisted on a small piece of land thousands of miles away?"

Paul argues that America needs to suck it up and accept Crimean self-determination, arguing that Ukrainian citizens in the province overwhelmingly voted for a merger with Russia. He also argues that the U.S. is constitutionally prohibited from overthrowing governments overseas or sending money to bail out Ukraine.

How we got here: Russian forces invaded a neighboring country, then claimed the right to annex it thanks to a fantastically illegitimate referendum in which it reported an Anschluss-esque 93-96% majority of the vote, despite 37% of the population claiming Ukrainian or Tatar ancestry. This is far from genuine self-determination and threatens to upset the principle of national sovereignty in Eastern Europe, where several former Soviet republics are getting very nervous. Paul's response is to say "So what?", shrug and walk off the international stage forever. And that's not even touching on his dubious claims about what the Constitution says we can and can't do in foreign policy (we can credit both the funding of the American Revolution and the Louisiana Purchase to international loan agreements, for one).

As Foreign Policy's Daniel Drezner noted a few years back, America's 20-somethings' "foundational foreign policy experiences" have basically been the Sept. 11 attacks, two long wars in Iraq and Afghanistan, a gigantic international recession and the slow ascent of China as a counterweight to U.S. hegemony. Clearly Paul has a point insofar as our international leadership until now has been far from inspiring. So it might not be surprising that the U.S. might want to shift gears and go somewhere else.

But Paul insists that our choice is between continued American adventurism abroad or some kind of isolationism, relying on the quasi-magical energy of unfettered trade to heal all wounds in the absence of international action. This dichotomy is a false one. Our options aren't limited to military intervention or full-scale retreat from the modern world; surely our political imagination is greater than that.

Going forward: Instead, let's look forward to the kind of future foreign policy projected by 65 Wikistrat analysts for the Diplomatic Courier, which projects that the next generation of American foreign policy will be driven by the generational attitudes of young people. They'll be inheriting a future in which predecessors' mistakes have generated a world of troubles, from unstable governments to damaged relations with countless countries across the globe. But instead of asking "who cares?", they'll rise to the challenge.

Like Paul, this new approach to international relations will advocate "a less active American presence in the world in the name of cost savings and moral principles." But Wikistrats' team argued that young Americans will still use the military abroad, but only in cases of humanitarian intervention likely supervised by a coalition of countries or the UN. It will question policies like the drone program, but maintain the role of America in the international arena via soft-power tools like how "technology can be used to support citizen's movements abroad"; "U.S. support will organically enable protest movements to be more grounded and organized in order to consolidate power peacefully." America will lead from behind, refusing to commit troops to pointless endeavors but "more willing to aid multinational operations and to support the promotion of global values."

Sure, it's a little optimistic. But it's definitely better than what Paul is selling.