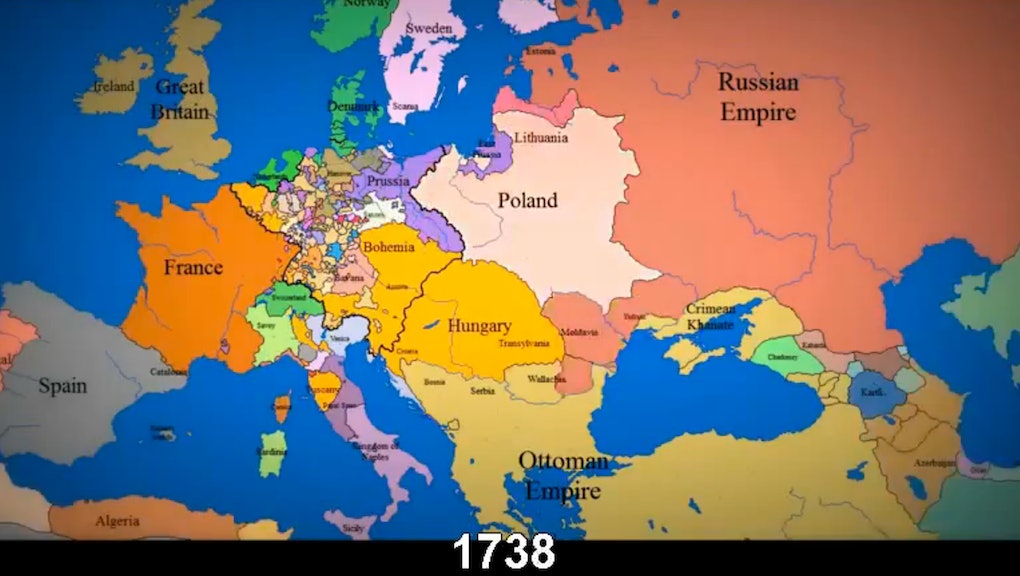 To Understand the Crimea Crisis, Watch the 1000-Year Transformation of Europe’s Borders

Border modifications, territory grabs and military seizures seem like practices from the ancient past, but Russia's annexation of Crimea from Ukrainian control this week reminds us that history, including the future of whole countries and empires, is constantly in flux.

Ukraine has been a country constantly at war with its own identity. The nation was only officially established in 1991, previously existing under the control of various outsiders going back centuries. For a few years in 1917 it enjoyed independence, before the creation of the Soviet Union. The territory was then named the Ukrainian Soviet Socialist Republic (Ukrainian SSR) and came under Moscow's power. It was only when the Soviet Union finally dissolved that Ukraine became the country we know today.

Russia agreed to honor Ukraine's territorial lines in the 1994 Budapest Memorandum, but has since reneged on its agreement.

Putin's aggression following Ukraine's uprising shocked the world. As the Ukrainian people battled for democracy, seeking to oust former President Viktor Yanukovych and his pivot toward Russia and to instead identify with Western Europe, pro-Russian citizens in Crimea stood by Putin's rule. Without missing a beat, presumed Russian forces swarmed into Ukraine. Soon Crimea became part of Russia. When Poland invoked the emergency Article 4 of its NATO allies, the world became fearful of another Cold War.

While western leaders are imposing severe economic sanctions and exercising patience and restraint toward Russia, Putin continues to flex his military muscles. There is reason for alarm, and the future of Ukraine remains undecided. While the world waits, this smart history video reminds us that changing identities, borders and rule of whole countries, while scary, is not anything new.