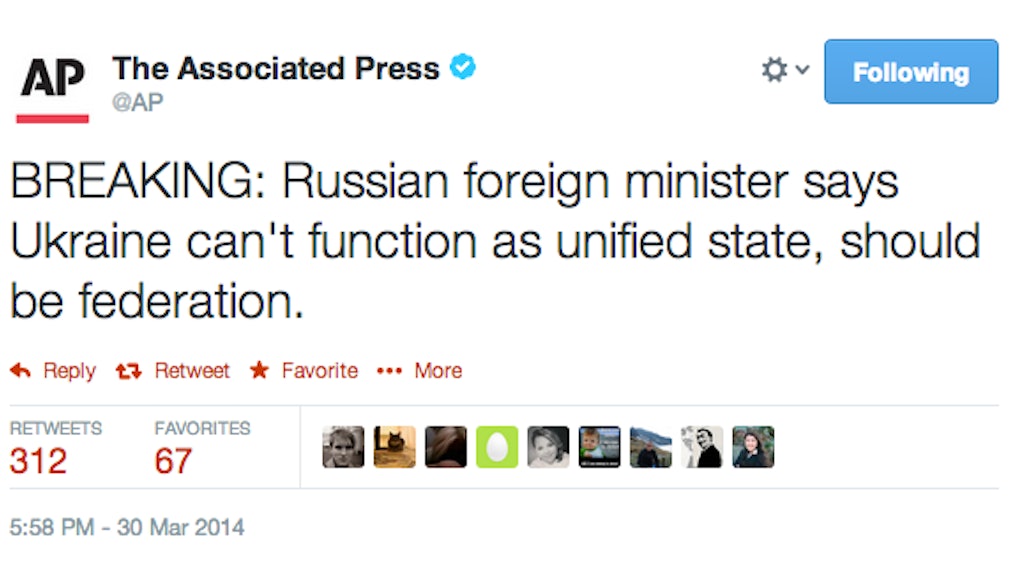 On Sunday, U.S. Secretary of State john Kerry and Russian Foreign Minister Sergei Lavrov met up to hammer out the annexation of Crimea and the overall instability of Ukraine. But if Kerry were hoping for Russia to magically back off its claims to the region, he was sure to be disappointed — if anything, the meeting merely confirmed Russia's plan to weaken and control Ukraine — and even the rest of Eastern Europe

At the four-hour talk in Paris, Kerry indicated that while the U.S. considers the annexation of Crimea to be "illegal and illegitimate," its goal was to defuse the tension in Ukraine, not to exacerbate it. But though he maintained afterwards that "both sides made suggestions of ways to de-escalate the security and political situation in and around Ukraine," Lavrov's suggestion may not be a popular option in the U.S. or in the Ukraine.

As the Associated Press succinctly tweeted:

"We can't see any other way to ensure the stable development of Ukraine but to sign a federal agreement,'' Lavrov said at a press conference after his meeting with Kerry.

What does this mean? On the surface, it looks like Russia may be ceding power back to Ukraine. A federal system may seem like the best option to bring together Ukraine's diverse ethnic, linguistic, religious and ideological populations. According to Lavrov, the U.S. is open to the idea, and further talks of building an Ukrainian federation would involve "all Ukrainian political forces without exception, naturally excluding armed radicals."

"If our Western partners are ready, then Russia, the United States and the European Union could form a support group on Ukraine," Lavrov said.

But an inevitable outcome of transitioning Ukraine to a federation model is that it would be weakened as a state. Moscow's plan would grant greater regional autonomy to the Russian-leaning, separatist areas of Ukraine, allowing them to adopt Russian as an official language and secure political independence from Kiev. And the interim Ukrainian government is not happy about it.

"We would like to urge Russia, before it presses its ultimatums on a sovereign and independent nation, to take note of the catastrophic state and complete powerlessness of its own ethnic minorities, including Ukrainians," it said in a statement.

What will happen next? Kerry has been non-committal about Moscow's proposal, affirming the need for Ukrainian representatives to participate in the discussion. "It is not up to us to make any decision or agreement regarding federalization. It is up to Ukrainians," he said, adding that future talks must address the de-escalation of Russian military build-up on the border.

As always, Lavrov maintained Moscow's position that Russian forces simply want to protect the ethnic Russians in Ukraine, and to disarm the "irregular forces and provocateurs" that have taken over the country. Lavrov added that Russia has "absolutely no intention and no interest in crossing the Ukrainian border." There are currently 40,000 estimated Russian troops stationed across the eastern border.

Experts at the Pentagon and NATO remain concerned that Russia is gearing up for a greater invasion of Ukraine, or even a further push into the Baltic states. Putin's own former economic adviser suggested that the president may be interested in expanding into Scandinavia. The tiny, breakaway state of Trans-Dniestra — which happens to border Ukraine — has been named as a potential target for Russian expansion in the region, with Putin formally asking the U.S. to guarantee its sovereignty.