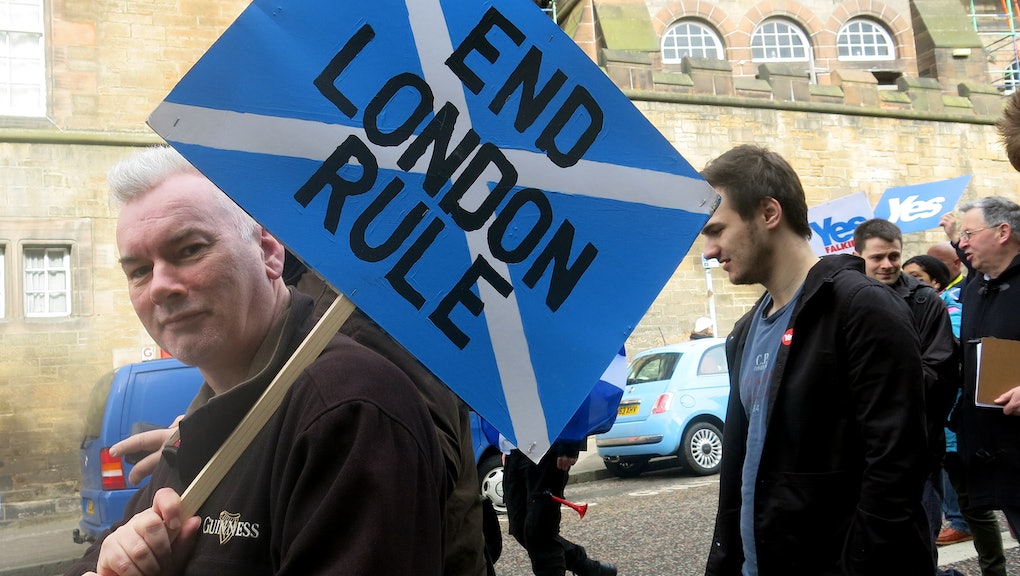 If you were reading the Independent this morning, you may have been taken aback by one of its headlines: "Exclusive: UN draws up peacekeeping plans in event of Scottish Yes vote."

According to the British paper, "The United Nations is drawing up plans for a peacekeeping mission to monitor cross-border tensions in the event of a Yes vote for Scottish independence." A task force named UNPPICT — the UN Prevention Programme for Inter-Caledonian Tensions had reportedly been set up.

Of course, if you read through the rest of the article, you would have quickly realized that the article was nothing more than an April Fool's joke. "It's after noon... so check the date!" read the article right after its lede.

Several U.K. papers thought along the same lines, riffing off on Scotland's pending independence referendum. The Daily Mail mocked up a revised version of the Union Flag, something that British citizens are worried might happen:

The Telegraph also reported that Scotland's First Minister Alex Salmond will be on the country's new pound coin:

The Guardian also claimed that Scottish drivers would now be forced to drive on the right side of the road, and that the country would adopt new road signage.

But the Independent's piece may have been the most elaborate of all, alluding to a certain iconic film about Scottish nationalism.

"One scenario being taken seriously is pre-arranged 'face-offs,' modelled on the film Braveheart, between rival militias who it is feared could travel to towns such as Gretna Green and Berwick-upon-Tweed for weekend showdowns," read the Independent article.

"Fears that the traditional 'blue helmet' colour scheme of UN peacekeepers could be misinterpreted as a show of support for an independent Scotland have led to a rethink on what headwear UNPPICT personnel might wear. A 'neutral' purple beret is the favoured alternative," it continued.