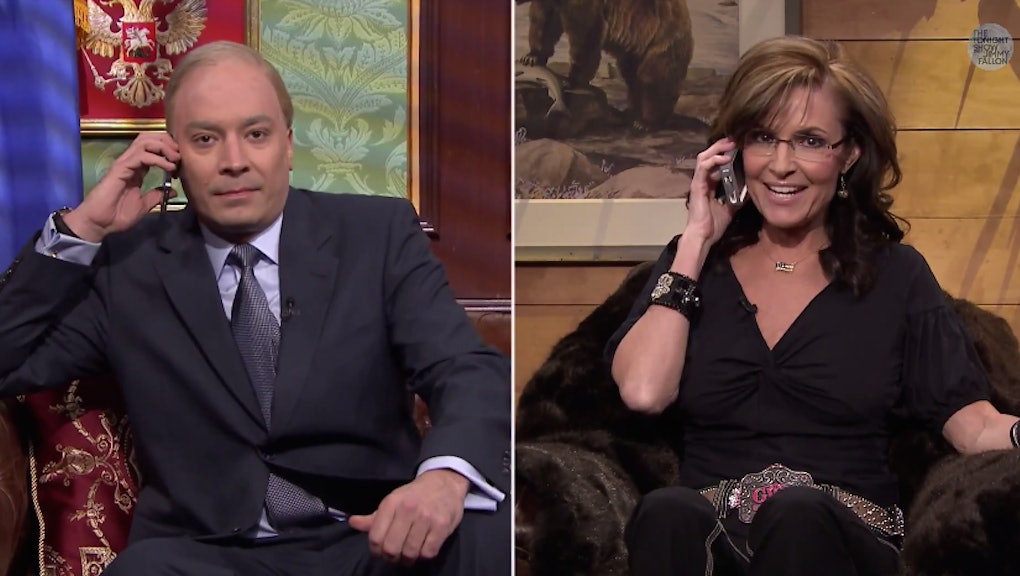 As many pundits have pointed out, former Alaska governor Sarah Palin may feel vindicated by Russia's recent incursion and annexation of Crimea.

Back in 2008, the then-vice presidential candidate was mercilessly mocked by the press for saying: "After the Russian army invaded the nation of Georgia, Senator Obama's reaction was one of indecision and moral equivalence, the kind of response that would only encourage Russia's Putin to invade Ukraine next." Six years later, the same critics had to eat their words after Vladimir Putin's army wrestled the Crimean peninsula away from Ukraine.

Now, it looks like Palin may have the last laugh, and she's gamely playing her "I told you so" card. On Wednesday, Palin appeared on a Tonight Show sketch with host Jimmy Fallon. Playing the role of Putin, Fallon was quick to give her credit for her Russia prediction.

"I heard that back in 2008, you predicted that I would invade Ukraine. Is this true?" he asks at the beginning of the sketch.

"You betcha, Vlad," she responds with a smile. The two go on to bond over fighting bears, President Barack Obama's mom jeans and Pharrell Williams' infectious song "Happy."

Watch the full sketch below:

Palin was even game enough to joke about how close Alaska is to Russia. During the 2008 presidential campaign, she was also ridiculed for saying, "you can actually see Russia, from land, here in Alaska." That resulted in an infamous Saturday Night Live sketch where Tina Fey played Palin and exclaimed, "I can see Russia from my house!"

Fallon also joked about Russia invading Alaska, to which Palin replied, "I wouldn't if I were you, Vlad. You may be able to take down a bear, but you're no match for a Mama Grizzly." The Russians behind the WhiteHouse.gov petition to return Alaska to Russia might do well to remember that.