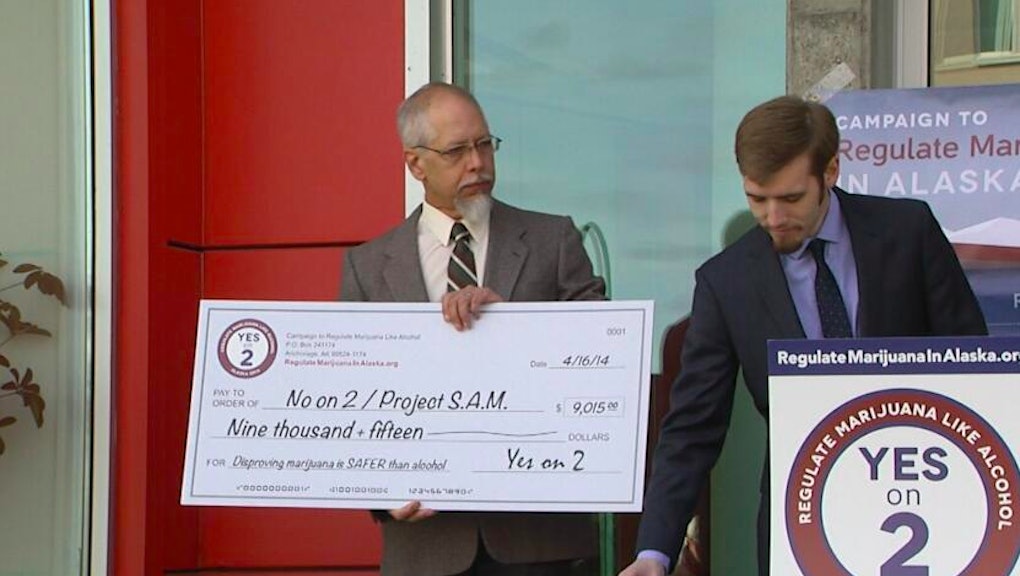 The news: As the debate over the possible health benefits and costs of marijuana continues, a group of pro-legalization activists in Alaska have put together a novel stunt: Prove that marijuana is more dangerous than alcohol, and the'll donate money to the anti-legalization campaign.

On Wednesday, a group of activists in Anchorage gathered with a giant novelty check written out for $9,015 — the amount that former Rep. Patrick Kennedy (D-R.I.) purportedly received from the alcohol lobby while he was in office. Kennedy also happens to be the founder of the anti-pot group, Smart Approaches to Marijuana (SAM), which has been trying to stop pot from being legalized in Alaska.

"We decided to present them with a challenge that really strikes at the heart of the issue," said Tim Hinterberger, chair of Alaska's pro-legalization campaign. "They are going to spend the next four months trying to scare people into thinking marijuana is so dangerous it simply cannot be legal for adults. Yet the fact is marijuana is far less harmful than alcohol to the consumer and to society."

The background: Alaska currently has a marijuana legalization measure on the ballot, which will be voted on in August. If it passes, the measure will allow anyone over 21 to own, smoke and buy pot, as well as grow up to six individual cannabis plants at home.

A recent PPP poll found that 55% of Alaskan residents support the ballot measure, which is similar to the numbers that were seen in Colorado and Washington before the 2012 election. If the numbers hold steady, Alaska is well on track to become the third U.S. state to legalize recreational marijuana.

Given its battleground status, organizations from either side of the legalization debate have pitched in to swing the vote in Alaska. While SAM is gathering support against the ballot measure, on the other side, the Marijuana Policy Project has reportedly donated $210,000 to the the Campaign to Regulate Marijuana Like Alcohol in Alaska. Neither side looks like it will be going down without a fight.

A bigger concern at hand: One argument that pro-legalization activists often use is the relative low health risk of marijuana, especially compared to alcohol. So far, there has been no known case of pot overdose, and evidence has shown that pot is far less addictive than alcohol. And most Americans tend to agree, with a recent NBC/Wall Street Journal poll showing that the public considers weed to be less harmful than alcohol, tobacco or sugar.

But the argument is especially pertinent in Alaska, which has a huge alcoholism problem. Alaskan natives have a 550% higher chance of an alcohol-related death than other Americans, and alcohol is involved in 90% of the criminal cases prosecuted in the region. Abuse of alcohol and other drugs like heroin cost the Alaskan economy $1.2 billion in 2010.

The situation has gotten so out of hand that several Alaskan communities have gone dry, imposing heavy prohibition rules on alcohol. Now, the state is at a tipping point: Those against marijuana legalization argue that it will exacerbate Alask'a existent drug problem, while those in favor believe that marijuana will be a safer alternative to alcohol and heroin. We'll find out in August which way Alaska decides to go.