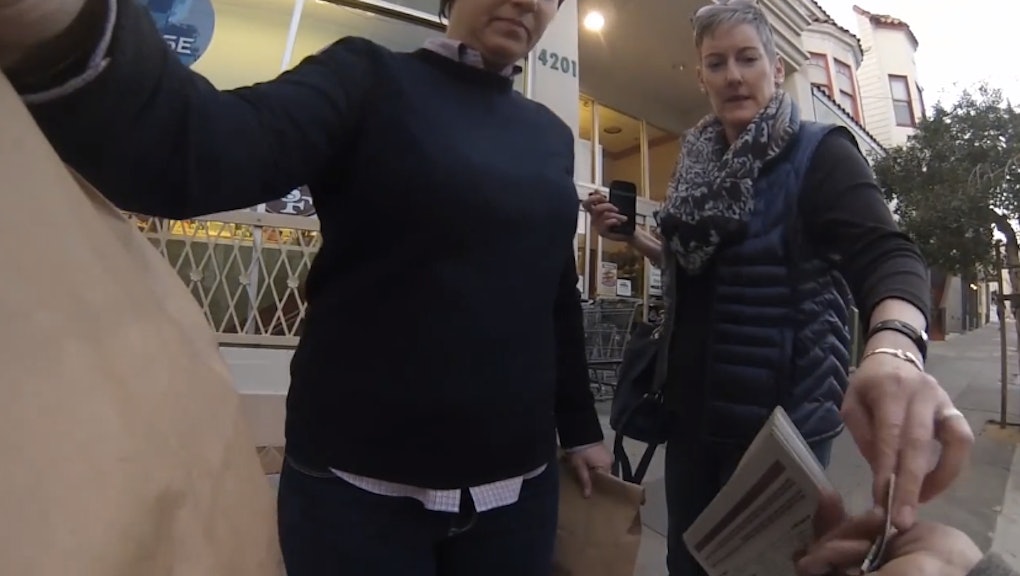 Every day, hundreds of thousands of homeless Americans struggle just to survive. It's a growing and sometimes unrecognized problem that's dangerously misunderstood and sometimes disgustingly mocked. Though some states are taking innovative measures to eradicate homelessness this epidemic is still treated as some sort of awful plague, a pox on the country. Perhaps part of the problem is that this issue is thought of as "homelessness," some kind of theoretical policy issue, rather than a very real problem that affects real people. And that needs to change.

"I've noticed, especially over the last two or three years, that people are really starting to lose their empathy and compassion towards humanity, not just with homeless but in general," said Adam Reichart, a man who's been homeless for 30 years, the last six in San Francisco, and the first volunteer of a new project called Homeless GoPro aimed at changing the conversation of homelessness in America.

According to their website, Homeless GoPro "outfits homeless volunteers with donated high-definition personal cameras, which they use to capture the world as they see it." The project was first conceived by Kevin Adler, a 29-year-old San Francisco resident and sociologist and education technology entrepreneur. Adler's uncle suffered from schizophrenia and died about 10 years ago after spending 30 years of his life homeless. After visiting his uncle's grave site a year ago, Adler began thinking about the people who live on the streets and are ignored daily.

"The goal is to build empathy, enable the non-homeless to walk with a homeless person for a few moments, and to explore how a camera lens associated with 'hardcore' activities like snowboarding and surfing can showcase courage and difficulty of another sort," Adler wrote on the project's website.

Like many other projects of the kind, one of Adler's largest goals is to spread awareness of this often-ignored problem. But by engaging with people's empathy and giving everyone a first person perspective of a homeless person's everyday life through a series of videos, Homeless GoPro is hoping to build a more substantial conversation.

Here are two of the first videos posted:

And another that shows just how quickly people dismiss the homeless:

Though there are likely many reasons that can be attributed to the rise of homelessness and an increasing comfort in simply ignoring homeless people when passing by them on the streets, Reichart believes that one modern convenience in particular is especially problematic: technology.

"I feel technology has changed so much where people are emailing and don't talk face-to-face anymore, people are losing social skills ... and their compassion," he said. "I feel like it's a lot easier to be, the best way to put it is, be cold, or have less feelings when you're typing something, than when you're looking someone in the eye."

Reichart probably has a very good point. Though we all seem to think we're connecting with each other more and more through social media, it's often the case that we take this "interaction" too far and spend more time on our computers and smart-phones and less time actually being social and interacting with other humans. And the more our reality exists solely on a screen, the easier it is to ignore homeless people on the streets.

Of course, just like anything that happens in our modern age, not everyone thinks this is such a good idea. ValleyWag's Sam Biddle attacked the project, calling it "stupidly uncreative, and yet somehow radically crass," and saying:

What kind of person can only feel for destitute strangers if they're provided a POV video stream of their lives? That's what it'll take for you to realize you're driving a wealth-consolidation wedge into your city? If this is what it takes to spur action, then let's just fucking give up on action.

So does that mean technology and gadgets should only be used to film your radical whitewater rafting company retreat and not anything that might be helpful to society? Clearly, if the non-improving homelessness statistics are any indication, the variety of other projects have done little to help this terrible epidemic, so why not try something that would easily and accessibly give a voice to the thousands of Americans who would otherwise go unheard?

Everything's not fine, and hopefully this project will at least begin to shed some light on this.