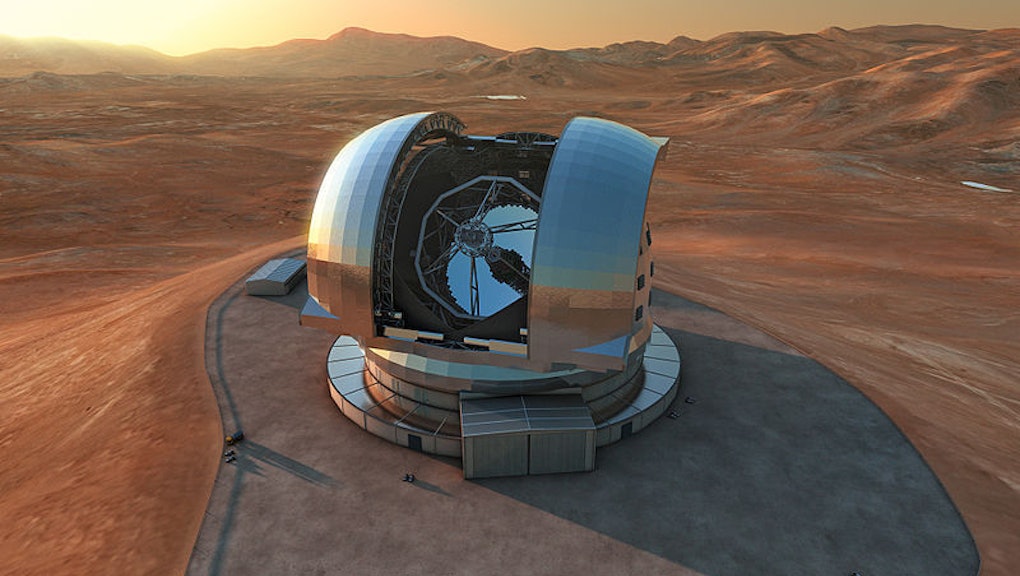 If There's Actually Alien Life Out There, This Might Just Be the Telescope to Find It

It's been a great month for space exploration: Just last week, NASA announced the discovery of Kepler-186f, the first planet we've found so far that has Earth-like conditions to sustain alien life. And now, engineers at the European Southern Observatory in Chile are about to build a telescope with the power to directly observe planets outside the solar system — so that for the first time, we can spot any signs of alien life from right here at home.

Called the European Extremely Large Telescope (E-ELT), the gigantic device will "look further back into the history of the universe than any other astronomical device in existence." It will be built atop a 10,000-ft mountain called Cerro Armazones, which has the perfect conditions to provide a clear, unobstructed view of the stars.

"[I]f you build your telescope where the atmosphere above you is completely dry, you will get the best possible views of the stars — and there is nowhere on Earth that has air drier than this place," said Cambridge astronomer Gerry Gilmore. "For good measure, the high-altitude winds blow in a smooth, laminar manner — like slabs of glass — so images of stars remain remarkably steady as well."

Construction is set to begin on June 16, and will be completed around 2025.

We have the technology: In December astrobiologists made a boastful claim about man's current, untapped ability to search and find alien life.

"This is the first time in human history we have the technological reach to find life on other planets," Sara Seager, a planetary scientist at MIT, said at a House Committee on Science, Space and Technology hearing today. "People will look back at us as the [generation] who found Earth-like worlds."

After 50 years, humanity is now in an era when it can provide data for whether life exists elsewhere in the universe, Mary Voytek, NASA's head of astrobiology, told members of Congress.

One telescope is already mapping out the stars: Astronomers have had great success at Cerro Paranal, a mountain 20 kilometers away from Cerro Armazones. For over a decade, they have used the facility's four Very Large Telescopes, which have mirrors that are eight meters wide. But astronomers are hoping that the E-ELT's 39-meter-wide mirror will provide an unprecedented look at exoplanets — which are outside the solar system — and possibly, extraterrestrial life.

"At present, our biggest telescopes can only spot really big exoplanets, giants that are as big as Jupiter and Saturn," said astronomer Simone Zaggia.

"But we really want to know about the smaller worlds that make up the solar systems in our galaxy. In other words, we want to find out if there are many Earth-like planets in our part of the universe. More importantly we want to find out if their atmospheres contain levels of oxygen or carbon dioxide or methane or other substances that suggest there is life there. To do that, we need a giant telescope like the E-ELT."

Even with our current technology, we've been able to push the boundaries of our knowledge of the universe. As PolicyMic's Lucky Tran reports, thanks to the Kepler Space Telescope, which was launched in 2009 to hunt planets across the universe, we've managed to find around 1,800 exoplanets so far, many of which have been discovered in just the last year or so.

The race is on. Since the Kepler Space Telescope launched in 2008, we've already found 1,800 exoplanets, including Kepler-186f. It's been remarkably effective so far because it can detect tiny changes in light from stars that are very far away. Through this telescope, we can identify planets that are the right size, right temperature and right distance from a sun.

But that's not all. NASA also has the James Webb Space Telescope (JWST), which is due to launch into space in 2018. The successor to the beloved Hubble Space Telescope, the JWST can provide atmospheric characterizations to show whether a planet has the right chemical conditions to sustain life.

With these powerful tools at our disposal, it looks increasingly likely that we can begin to answer a question thas perplexed humanity for centuries: Are we alone in the universe?