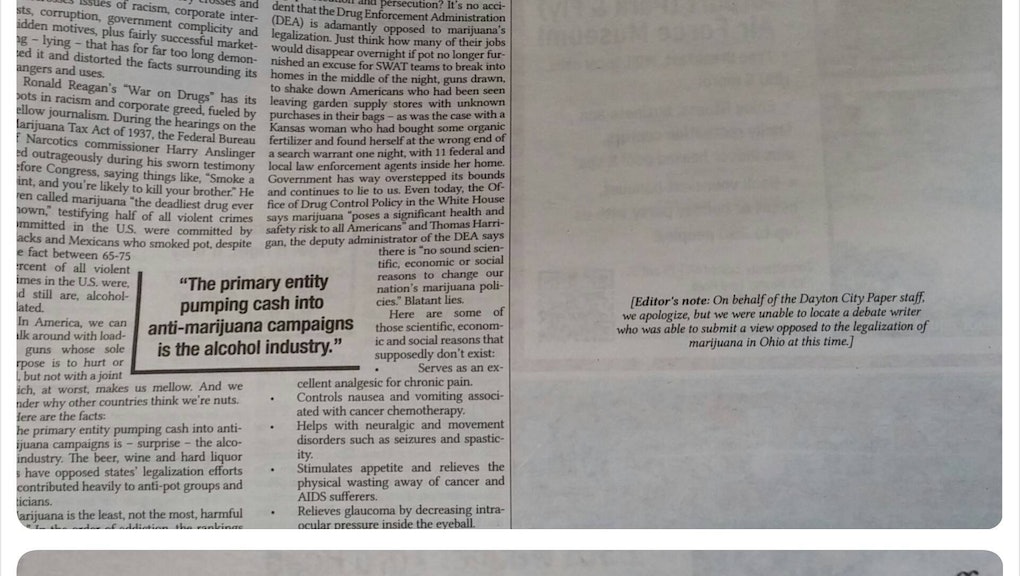 This is kind of awkward. While attempting to summarize the marijuana prohibition debate following full-scale legalization in Colorado and Washington, Ohio's Dayton City Paper accidentally proved how it's almost absurd to even call this a "debate." One DCP staffer was supposed to argue for and one against legal marijuana.

The only problem? They couldn't find anyone who disagreed.

The DCP editor's note reads: "On behalf of the Dayton City Paper staff, we apologize, but we were unable to locate a debate writer who was able to submit a view opposed to the legalization of marijuana in Ohio at this time."

An expanded version of the debate online features a centrist viewpoint, but no arguments against any kind of reform whatsoever.

Changing times: It's tough to imagine this scenario playing out just a decade ago, when the vast majority of Americans opposed marijuana legalization. Now they approve of it by a 52% majority.

A Gallup poll conducted in March found that 58% of Americans now support the legalization of marijuana.

And a 2012 Gallup poll found that no one wants federal intervention in the states where marijuana use has been legalized, either.

Almost 7 in 10 Americans now recognize that marijuana is less harmful than alcohol, another widely available substance. And Pew found that for the most part, states are responding to the change in public opinion by diminishing penalties for marijuana or doing away with criminal charges altogether:

Changing public attitudes have granted reformers the opportunity to demonstrate that the slowly ending war on weed hasn't been accompanied by skyrocketing crime rates or slack-jawed teens setting fire to city hall. As PolicyMic has previously noted, three months after legalizing marijuana, the sky hasn't fallen in Denver, where the wild-eyed claims of anti-legalization activists have fallen pretty much flat. The only thing that's really changed since Colorado decided to move towards full-on legalization is millions of dollars in new tax revenue and declining marijuana arrest rates.

As more time passes, expect attitudes on marijuana to become increasingly progressive and for fewer opponents to dominate the discussion on drug policy in America. That'll be the day.