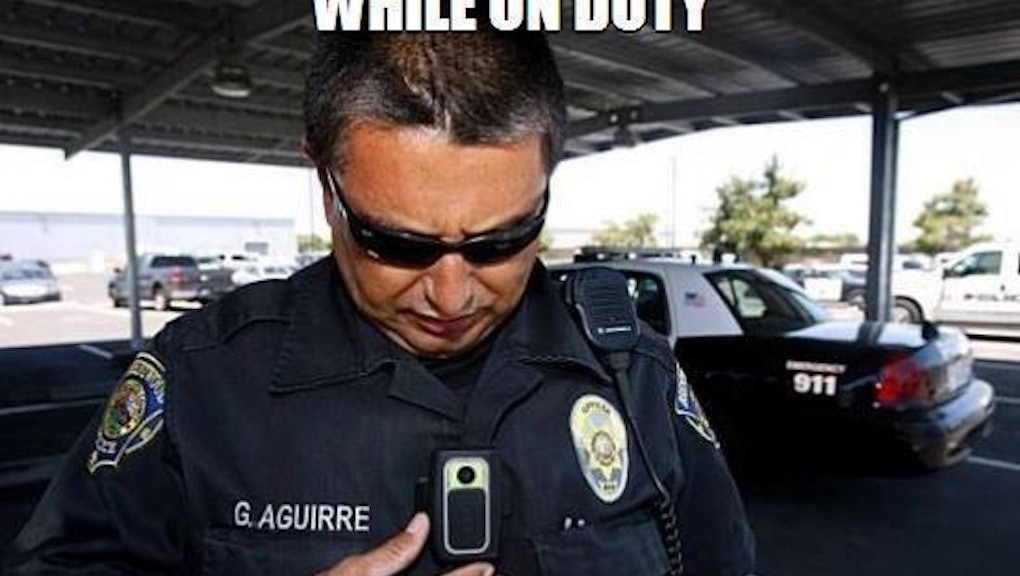 One Meme Shows How Simple It Would Be to Fix Police Brutality in the U.S.

Police brutality in the United States is out of control. Last month in Baltimore, a concerned stranger paid $15,000 to bail 25-year-old Calvin Wilkes and two others out of jail after witnessing an arrest she described as "one of the worst things I've ever seen" — beating one suspect until he bled from the mouth after the trio caused a public disturbance.

In Knoxville, Tenn., a sheriff's deputy was photographed choking a college student until he passed out while he was being placed in handcuffs. In Troy, N.Y., cops burst into a bar and began beating people after getting into an argument with a patron.

Police brutality can be found anywhere, not just in big cities or towns in the Deep South. Videos of police harassment and misconduct abound on the Internet, yet officers seem largely free to act above the law. In 2011, the Justice Department investigated 17 police departments simultaneously, "more than anytime in the division's history." An estimated 84% of people in 2008 who had contact with police and experienced force or were threatened with force thought police were acting improperly.

There's a solution: Make sure every incidence of contact between police officers and civilians is well documented. In Rialto, Calif., all 70 officers were required to wear small cameras while on duty in a controlled study.

The results were astounding: Complaints against officers fell by 88% and use of force plunged by 60%. The implications are unavoidable — when officers know they will be held accountable for misconduct, they simply don't act improperly. And citizens are more amenable to policing, with improper objections withdrawn and situations escalating less often.

While the Orwellian nature of the cameras didn't go unnoticed, even the Southern California ACLU said that with proper controls, the gains in accountability outweighed privacy concerns.

It's not the only way to increase police accountability. Cops in Grenada, for example, all have department Twitter handles sewn onto their uniforms.

Rialto's experiment has already been so revolutionary that full-scale experiments are on the way in England and Wales, and similar successes have been noted in Chesapeake, Va. The first major department to roll out the cameras may be the scandal-plagued New Orleans Police Department, and others are soon to follow.