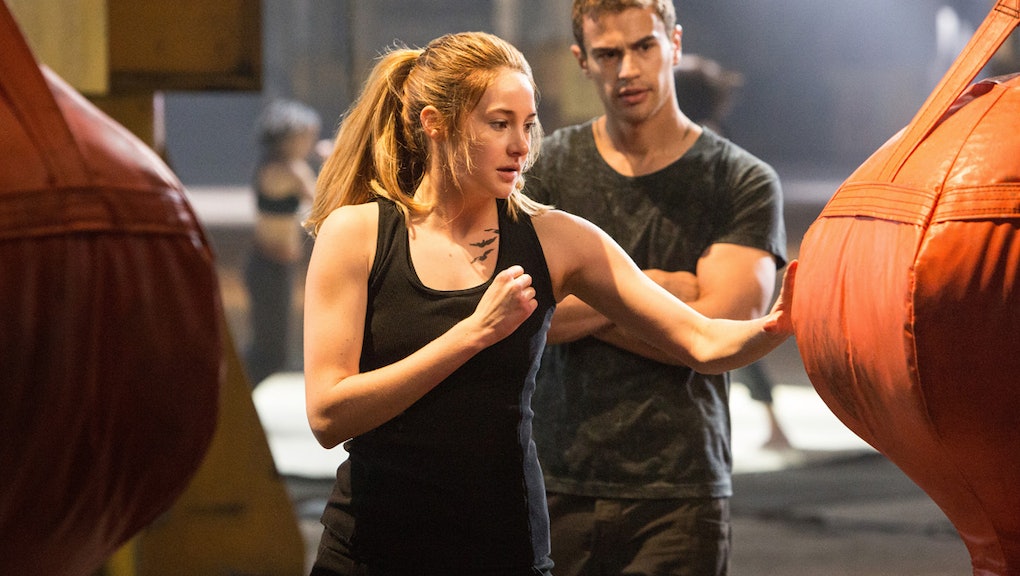 A collective groan echoed across the lady blogosphere on Monday, when young actress Shailene Woodley joined the ever-growing ranks of celebrities who don't understand what the word feminist means. When Time asked Woodley whether she considers herself a feminist, the Divergent star replied, "No because I love men, and I think the idea of 'raise women to power, take the men away from the power' is never going to work out because you need balance."

The Internet has been quick to point out the errors in Woodley's words (for starters, feminism doesn't involve hating men or raising women above them), but this incident highlights more than Hollywood ignorance: The obsessive vetting of female celebrities' feminist credentials is another way in which high-profile women are subject to more exacting expectations than their male peers.

Sexism affects everyone, but female celebrities are increasingly getting grilled about their ideological leanings in a way that male stars aren't. From Lady Gaga, to Kelly Clarkson, to Miley Cyrus, to Taylor Swift, to Madonna, Katy Perry, to Beyoncé, it's clear that the media particularly loves to drop the F bomb question on women with strong, independent public personas, music or on-screen characters (and, more often than not, scorn or mock them when their responses are deemed lacking).

We don't do this to the guys. There are plenty of listicles praising exclusively men or women who wear the feminist label, but there are also many expressing outrage or sheer disbelief over powerful women who don't. "Male Celebrities You Won't Believe Don't Call Themselves Feminists," on the other hand, is a less common theme.

This isn't an issue of consciously ceding space to female voices, nor some deliberate ploy to let men off the hook. It's more that "Are you a feminist?" has been tossed in with "What designer are you wearing?" and "What's your diet regimen?" in the media's mind as something that only concerns girls. It doesn't.

Despite this attention, Gosling has not been pressed to publicly declare himself a feminist. One interview addressed the issue indirectly by asking Gosling if he thought he looked like a feminist, but Gosling evaded an answer. No heartbroken or outraged stories followed. This isn't to disparage Gosling, who appears to be a smart, stand-up guy. It seems he's been given a pass because many of his statements support feminist thinking — but then again, so do many of Woodley's.

When male stars actually do take on the feminist mantle without prompting (generally a good thing), they're often unquestioningly celebrated, whereas their female counterparts may have their every subsequent action dissected for signs of hypocrisy. Joseph Gordon-Levitt, for example, received high praise for telling Ellen Degeneres, "I do call myself a feminist. Absolutely!" And singer-songwriter John Legend said at a fundraising event, "All men should be feminists. If men care about women's rights, the world will be a better place." Legend's declaration was admirable, and earned the Internet's widespread adoration.

By contrast, look at the reception of another outspoken feminist in the music industry: Beyoncé.

Bey is obviously more famous than both Gordon-Levitt and Legend, but her beliefs have been thrust under a disproportionately critical lens. Many point out that she plays into patriarchal sexuality for her advantage, and argue that calling her tour the "Mrs. Carter Tour" and including an insensitive verse by husband Jay Z in her song "Drunk in Love" outweigh her feminist activism.

Regardless of whether you agree with these criticisms, it's worth noting that neither Legend nor Gordon-Levitt have faced nearly any scrutiny since making their bold statements.

Of course, we need to keep things in perspective. Pop feminism often contains problematic mixed messaging; after all, landing a role in a Hollywood blockbuster doesn't come with an honorary degree in feminist theory. To return to Woodley, we should also keep in mind that she is a 22-year-old actress — not Gloria Steinem.

Nevertheless, celebrities are powerful people. Even if we shouldn't be taking all of our activist cues from their sound bites, the fact remains that these men and women have enormous platforms, and as such the potential to be hugely influential when it comes to raising awareness surrounding these issues. The lack of equal emphasis on male celebs' feminist beliefs just perpetuates the idea that the onus to fight sexism falls solely on women's shoulders. So if we're going to insist on asking celebrities about feminism, we need to hold the guys accountable, too.