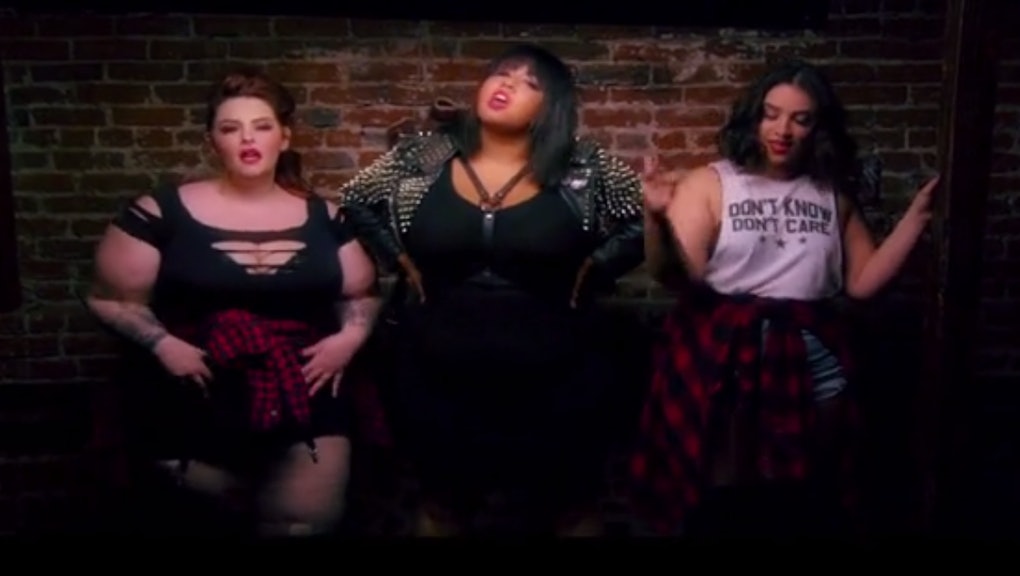 Six months after Beyoncé's hit song "***Flawless" powerfully combined pop culture with commentary on gender discrimination, the ripple effect from her inspirational music can still be felt. Building on this momentum is Gabi Fresh, a plus-size model who was recently inspired to produce her own version of the monster hit. Fresh's point? You don't have to be a certain size to own your flawlessness.

Together with two other plus-size models, Fresh created her own version of the "Flawless" video, combining it with the #everyBODYisflawless campaign. By including Tess Munster and Nadia Aboulhosn, Fresh said she wanted to show how plus-size models and bloggers are working together to help more women realize and celebrate their self-worth.

"This video is dedicated to the mainstream media," Fresh wrote on her blog, "to the fashion industry, to Internet bullies, and to anyone else who thinks it's their right to try to make us feel less than because of their insecurities. #everyBODYisflawless"

"As a fat woman of color, I'm often treated differently than my thin, white peers," Fresh continued. "I get stares and cold shoulders at fashion events. I hear whispers. I get hate mail and trolling comments from people who call me disgusting and say I shouldn't be allowed in public."

The movement seems to have hit something of a nerve online, where people have taken to social media to applaud the concept.

The positive reaction may be attributed to the continued prevalence of fat-shaming culture in the United States — and not just in the fashion industry, either. The effects of fatphobia and body shaming in general can be felt regardless of generation or profession, and they don't seem to be going away any time soon.

"Every day it seems like there are more and more advertisements, magazine pages and commercials brainwashing people," Nadia Aboulhosn, one of the models featured in the "Flawless" video, wrote on her website.

But there's good news, too. The efforts of Aboulhosn, Fresh and others seem to slowly but surely be gaining traction in the public space. Similarly, projects such as Florida filmmakers Lindsey Averill and Viridiana Lieberman's upcoming documentary Fattitude, are raising awareness by using the power of the media to fight everyday prejudice and fat-based discrimination in pop culture.

The Fattitude filmmakers point out the negative portrayal of fat people, beginning with children's cartoons that show monsters as fat to TV series where fat people are caricatured and movies where the fat guy is always the dumb sidekick.

Together, the efforts of activists like Fresh, Averill, Lieberman and many others are all part of an important campaign to undo an American stigma reinforced by stereotypes from popular culture. Reinforcing a different idea, that fat is not inherently a flaw, is just one way to start redefining attitudes regarding those who don't fit the traditional beauty standards.