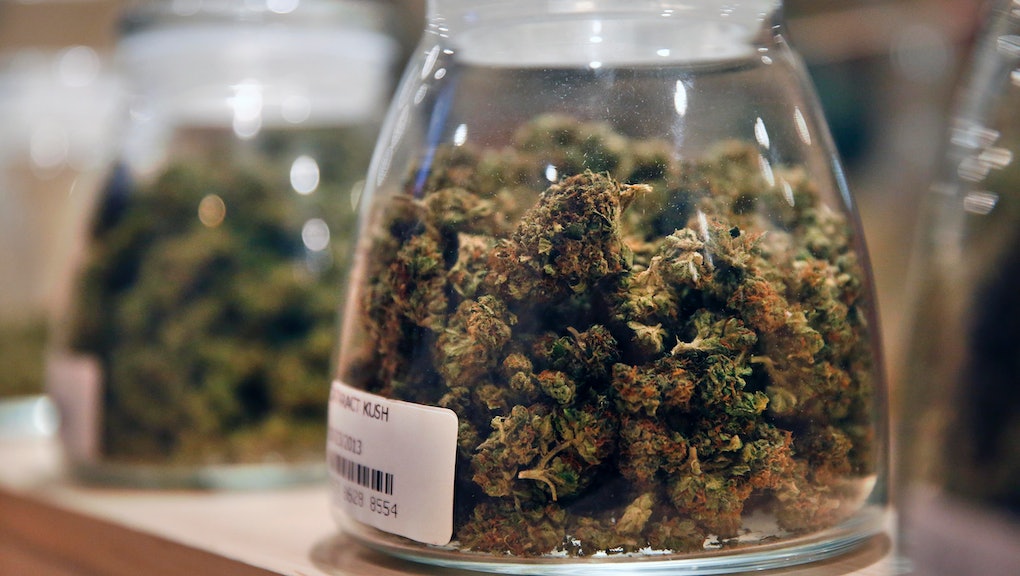 8 Biggest Lies We Have to Stop Telling About Marijuana

Legal marijuana will lead to criminals smashing through your door and stealing your money.

Marijuana has no medical use.

Do these claims sound familiar? Drug warriors have been extremely successful in alarming America about the dangers of marijuana for decades. But where they haven't been successful is spreading accurate information about ganja to the populace.

Here are 8 of the top myths people tell about marijuana, and how to rebut them.

1. Marijuana is a gateway drug.

Marijuana's opponents claim marijuana is a "gateway drug" — that once someone smokes marijuana, they're much more likely to try other, harder drugs and eventually end up using something much more dangerous. There is, in fact, a correlation between marijuana use and other drugs: The National Institute on Drug Abuse claims that a person who smokes weed is 104x more likely to use cocaine than someone who never touched a joint.

But that's all it is — a correlation. As TIME's Healthland wrote all the way back in 2010, scientists have discarded the gateway hypothesis since the 90s. A report on the Institute of Medicine of the National Academy of Sciences in 1999 said that:

The Marijuana Policy Project says that 107 million Americans (nearly 40% of the country) have tried marijuana, while only 37 million have tried cocaine and less than 0.1% of Americans have used either coke or heroin in the past month. Spokesman Morgan Fox says marijuana has never been demonstrated to have any chemical component that would make it particularly dangerous and that if there is a gateway, it's because dealers have an incentive to push other illegal drugs on buyers.

"When you go to a liquor store for a bottle of wine, there isn't a person there trying to sell you cocaine or other dangerous products," he says. "An illegal narcotics dealer has incentive to push dangerous drugs."

Another study of 12th graders published in the Journal of School Health indicated that if there is a "gateway drug," there's more evidence to point towards alcohol as the culprit. A 2012 review of the evidence in Drug and Alcohol Dependence for the gateway drug hypothesis noted that 83.2% of hard drug users in Japan had never touched cannabis, while noting that the theory of a variety of gateway behaviors stood up to more rigorous review.

Reason's Jacob Sullum wrote that the gateway drug hypothesis' "durability is largely due to its ambiguity: Because it's rarely clear what people mean when they say that pot smoking leads to the use of 'harder' drugs, the claim is difficult to disprove."

2. It's as dangerous as LSD or heroin.

This argument is based off of the DEA's list of controlled substances, which places marijuana among "the most dangerous drugs," "with no currently accepted medical use and a high potential for abuse." Schedule I drugs are said to leave users with "potentially severe psychological or physical dependence," and in addition to weed, that list includes heroin, (LSD), ecstasy, methaqualone, and peyote.

That's some pretty hefty, dangerous-sounding company. But in 2010, 38,329 people died from drug overdoses. Pharmaceutical drugs killed 22,134 people, of which opoid analgesics killed 16,651. An additional 25,692 people died from alcohol overdoses (for comparison, the CDC says that alcohol kills 88,000 a year including conditions like liver failure and drunken driving accidents).

But in not a single documented case has marijuana killed someone from overdose — technically, with a lethal dose that would require ingesting the THC of at least dozens and probably hundreds of pounds of marijuana or more, it's less lethal than water. Even the National Institute on Drug Abuse admits that it's "not very likely" you could overdose on marijuana, while still warning users they can experience anxiety attacks or get in marijuana-related accidents.

So by the most obvious metric of marijuana's danger — whether or not you can die or even be seriously injured through an overdose — the answer is plainly no.

Other Schedule I and even Schedule II drugs like meth and cocaine are plainly far more dangerous. That might explain why 38% of the country has tried it and walked away fine from the experience.

3. It's causing an epidemic of car crashes.

But if we were going to settle on another metric of how dangerous marijuana is — how many car crashes it causes — marijuana is still not anywhere near as dangerous as other illicit drugs. In general, the performance of drivers on THC is not impacted nearly as much as drivers on alcohol. A 2004 observational case study in Accident Analysis and Prevention found that "no increased risk for road trauma was found for drivers exposed to cannabis," while alcohol and benzodiazepines were linked to vehicular accidents.

There's some bad news here: a study published in the American Journal of Epidemiology that assessed 23,591 road fatalities found that the presence of cannabis in a dead driver rose from 4.2% in 1999 to 12.2% in 2010. But since THC can be present in blood for days after use, it's unclear how many drivers were actually high at the time of the accident. Furthermore, alcohol was found in over three times as many drivers — around 39.7%.

As Jenny Hollander writes for Bustle:

"Here's what we do know: Stoned drivers behave differently from drunk drivers. Stoned drivers are more aware that they’re intoxicated — the opposite applies for drunk drivers — and so they tend to actually drive more slowly and carefully. Therefore, drivers who are a little stoned are generally safer drivers than those who are a little drunk. As a rule, drunk driving has been understood to be far more dangerous than driving when high."

So while no one would advise getting high and driving, there's no solid evidence that marijuana-related traffic fatalities are a major national epidemic.

Sheriff Tom Allman of Mendocio County, Calif., had a warning for Colorado residents three months after they voted to legalize marijuana in Nov. 2012: "Thugs put on masks, they come to your house, they kick in your door. They point guns at you and say, 'Give me your marijuana, give me your money.'"

But Denver crime rates remained stable and in some places actually fell. (Arson was up 109% from the same period, but represented just 23 of 3,757 crimes — so if you want to blame every count on smouldering doobies, whatever.)

A study in PLOS One that examined states which legalized medical marijuana over the period 1990-2006 found that there were actually minor reductions in the homicide and aggravated assault rate.

It's debatable whether legalizing marijuana has a substantial downward effect on the crime rate. But what's clear is that looser marijuana laws have not been behind any noteworthy crime waves. And what's more, fewer people are going to jail in Colorado now that marijuana has been legalized.

5. It makes you lazy and unsuccessful.

Opponents of marijuana reform point to studies like this one from researcher Christer Hyggen that linked marijuana use to lower motivation at work. During the study, 1,997 respondents born between 1965-1986 were tracked and found to have a statistically significant reduction in their work commitment. Sixty-three "repeat users" had an average score of 3.9 on questions of work commitment, compared to scores of 4.2 and 4.3 among limited users and those who hadn't tried it at all.

But that study wasn't able to finger pot as the culprit, saying it could have also been the social environment in which pot is used or whether the repeat pot-smokers were less committed to begin with. It also didn't tell us anything about the quality of lives of the smokers. And even if we assume that marijuana use was directly responsible for the decline in work commitment, habitual marijuana use might just be one of many contributing factors to below-average career commitment.

And many, many successful people have used pot at least once in their lives — from President Barack Obama and Supreme Court Justice Clarence Thomas to Microsoft CEO Bill Gates and former NYC Mayor Michael Bloomberg. Of all the anti-marijuana arguments, this one is the silliest, encompassing 38% of Americans.

Studies have discovered cannabis to be less addictive than nicotine, alcohol and even caffeine. A large-scale survey in 1994 by epidemiologist James Anthony of the National Institute on Drug Abuse asked more than 8,000 people between the ages of 15-64 about their drug habits. They found that less than 9% of marijuana users ever fit a diagnosis of dependence, compared to 15% of drinkers, 17% of cocaine users, 23% of heroin users, and 32% of cigarette smokers. By and large, it seems marijuana is less addictive than a plethora of legal and illegal substances.

It's true that some 957,000 people aged 12 and over sought treatment for marijuana in 2012. But the large majority of treatment-seekers were referred by the criminal justice system, which has in many places decided referring marijuana users for drug programs instead of locking them up is a better use of public time and funds.

Psychology Today's Dr. J Wesley Boyd wrote that "the vast majority of marijuana users are neither addicted nor almost addicted to cannabis," comparing it to totally-legal alcohol. He also says that the current medical understanding is that physiological withdrawal symptoms from marijuana are "generally mild." CNN's Dr. Sanjay Gupta, a former opponent of medical marijuana, now admits that "It is hard to make a case that it has a high potential for abuse. The physical symptoms of marijuana addiction are nothing like those of the other drugs I've mentioned [morphine, heroin or cocaine]."

Sorry, but that train has long since left the station. Some 19-25 million Americans claim to smoke marijuana at least once per year, all under a strict regime of prohibition across most of the country.

Decriminalization, however, has had little to no effect on consumption rates. One study found that while decriminalization pretty much had a negligible effect on prevalence of use, it generated substantial savings in the criminal justice system. A 2001 paper by Don Weatherburn and Craig Jones found that "Fear of arrest, fear of imprisonment, the cost of cannabis or its availability do not appear to exert much effect on the prevalence of cannabis use." And all this for the small minority of users who ingest marijuana regularly; they found that 54.2% of self-identified users use it "every few months" or less, while just 9.7% smoked every day.

A wide range of literature suggests that not only is marijuana prohibition not convincing people to abstain from drugs, its social costs may outweigh any perceived benefits. What's more, the anti-drug crowd has lost of the faith of teenagers because they offer hyperbole and panic rather than factual explanations of marijuana and responsible use.

This one ignores not just widespread medical evidence, but what the medical community itself says. WebMD found that 69% of doctors believe medical marijuana delivers benefits to patients, while 82% of oncologists and hematologists were in favor of medical marijuana. Another study published in the New England Journal of Medicine of 1,446 doctors from 72 countries and 56 states and provinces in North America found that 76% supported medical marijuana.