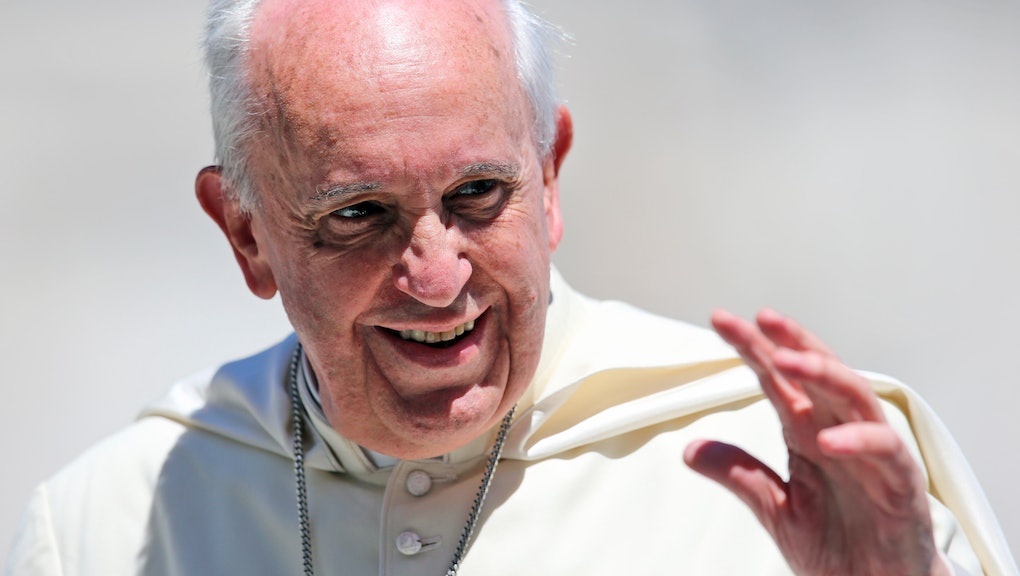 The news: Greetings, aliens — the pope means you no harm.

On Monday, Pope Francis made a rather fantastic and out-of-the blue proclamation. Preaching about the spirit of acceptance and inclusion, the pontiff announced that he would be open to welcoming any extraterrestrial life to Christ.

"If, for example, tomorrow an expedition of Martians came, and some of them came to us, here... Martians, right? Green, with that long nose and big ears, just like children paint them... And one says, 'But I want to be baptized!' What would happen?" he said.

Wait, what? This is not the first time that the Vatican has brought up welcoming extraterrestrials to the fold. Back in 2010, one of Pope Benedict XVI's astronomers said he would baptize any willing aliens. "Any entity — no matter how many tentacles it has — has a soul," said Guy Consolmagno.

But there's a reason behind the proclamation. While Pope Francis was talking about a hypothetical situation, he was really illustrating the importance of opening the Church's doors to more people (a common theme for Francis so far). During the same homily, the pope also described the resistance St. Peter met when he allowed non-Jews to become Christian.

"Peter in that first diocese — the first diocese was Antioch — makes this decision: 'Who am I to admit impediments?' A nice word for bishops, for priests and for Christians. Who are we to close doors?" he said.

It's also important to note that the pope has been matching his words with action. He has already proposed allowing children of unmarried parents to get baptized, even though the Church considers such living arrangements to be sinful.

But there's still a long way to go. While accepting alien souls into the arms of Jesus Christ is a nice thought, there's a lot Francis and the Church can do to better integrate its current members. The pope has previously stated that he wants women to have higher official roles in the Vatican bureaucracy, but there is still no word on ordaining women as deacons or ministers who can assist at Mass or perform baptisms.

The same goes for LGBT representation in the Church. Last year, when asked about the prospect of openly gay people serving in the clergy, Pope Francis famously said, "If someone is gay and he searches for the Lord and has good will, who am I to judge?" While that statement was met with great approval, little has been done to turn this into practice.

Still, Pope Francis' public stance on these issues is a marked progression from his more conservative predecessor. And while he has remained firm on certain issues, such as abortion, he has used his year-long tenure to criticize ideology, rail against capitalism and support the evaluation of civil unions.

Hopefully, in the coming years, the pope will be able to implement the measures he's already promised, especially before the aliens arrive and he has to add even more members to the congregation.