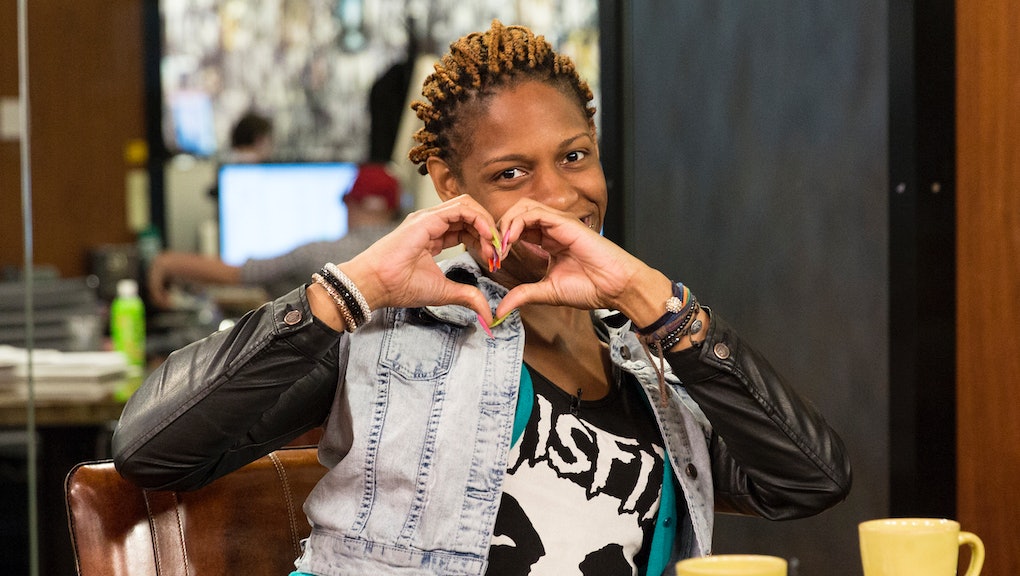 CeCe McDonald Shuts Down 7 Lies We Tell About Trans Women

On a recent spring evening in New York, people gathered at an underground venue in SoHo to hear Laverne Cox (of Orange is the New Black fame) and transgender activist CeCe McDonald discuss art as a vehicle to transform culture, especially in relation to the criminal justice system and transphobia.

This was not the first time Cox and McDonald sat down to chat. In June 2011, McDonald was arrested for the death of her transphobic attacker and sentenced to 41 months in prison. When Cox learned about McDonald's incarceration, she launched a campaign to confront violence against trans women of color. Cox traveled to Minneapolis to listen to McDonald's story of how the prison system forcibly attempted to delegitamize McDonald as a woman by putting her in a men's facility.

Nearly three years after her arrest, CeCe McDonald is free — but the everyday lives of trans women, beyond headlines of violence or flattened narratives about sex work, are only just emerging in mainstream media.

To help correct this, McDonald spoke to PolicyMic, before joining Cox on stage, about seven of the biggest lies perpetuated about trans women.

1. Trans women are only attracted to men.

"Being trans is just your outer shell, it has nothing to do with your make," she said. "Some trans women choose to be asexual and just love themselves. There's more to us than the stereotypes placed upon us. I know lots of trans women who are still married to their wives, and who now identify as lesbian."

Trans women are women and are subject to the same beliefs, ideals, vulnerabilities and prejudices as any other woman, McDonald says, despite the media's tendency to pigeonhole trans women as too caught up in prostitution or drugs to empower themselves.

McDonald identifies as a feminist and believes in equal rights for women — all women. What could the feminist movement do better? "Accept and acknowledge trans women as women, so that we can all progress together," she says.

Trans women are women. Trans men are men. There's no distinguishing between a "real" woman and a trans woman. The problem, explains McDonald, is that "trans people are seen as objects or props, and people don't attach the humanity to us and the things we go through."

For reference, Barbie is not an actual woman.

4. Most trans women are sex workers or have dysfunctional relationships.

It used to be, McDonald said, the only stories to make the news on trans women were if they'd been killed while doing sex work or were victims of hate crimes. Lately, mainstream media has finally begun to showcase the lives of trans women beyond sex work and instead focus on their place in pop culture or trans activists and allies leading grassroots movements against bullying.

McDonald points out that trans people have loving relationships and live normal lives.

RuPaul is not trans, he is a drag queen. However, he remains inextricably linked to the trans community despite the fact that he's been accused of transphobia.

"Trans women are women. Not transvestites, not drag queens," McDonald said. RuPaul is not a woman. In fact, RuPaul's Drag Race, a long-running show on Logo TV recently ignited controversy and outrage with a mini-segment titled "Female or Shemale," in which the audience guessed whether women were trans or not based on pictures of body parts.

Logo TV eventually offered an underwhelming apology, but the ironic association of RuPaul with the trans community will likely continue.

McDonald points out that a lot has changed in the last few years, and that this next generation of trans kids will have a much brighter future. PolicyMic has written before how trans rights became the civil rights struggle of our generation. "Now that I see young people coming out more and more, there's some progress on how people are rearing their children to not be discriminatory," she said. "There's been a movement to show people the stories of trans women thats put us in a more positive light."

7. All trans women have the same life experiences.

McDonald says that trans women, like any group of random humans, have different life experiences.

How might one get to know what it's like to be CeCe? "Ask," she said. "It doesn't hurt to sit down and get to know somebody. I know there are lots of times where people assume things about me, and then they have this perplexed look on their face when I explain who I am. When you take time to get to know a person, that's how you learn."