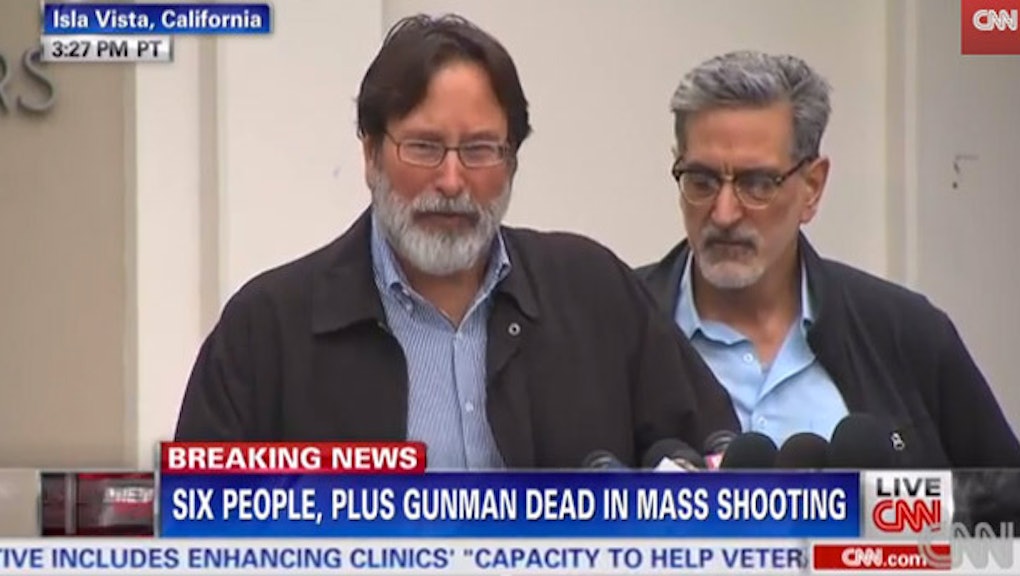 Late Friday night, 22-year-old Elliot Rodger went on a shooting rampage, killing seven and wounding seven more. During a press conference Saturday afternoon, Richard Martinez, the father of one of the victims, took the podium to rail against politicians, the National Rifle Association and the general "madness" that he believes led to the killing of his son.

"Our son Chris Martinez and six others are dead," Martinez said. "Our family has a message for every parent out there: You don't think it will happen to your child until it does."

Watch the full video below. Martinez begins speaking around the 0:42 mark.

During his clearly emotional speech, Martinez was quick to share his opinion partially blaming the NRA for his son's death.

"Chris was a really great kid. Ask anyone who knew him. His death has left our family lost and broken."Why did Chris die? Chris died because of craven, irresponsible politicians and the NRA. They talk about gun rights. What about Chris's right to live?"When will this insanity stop? When will enough people say, 'Stop this madness!' Too many have died. We should say to ourselves, 'Not one more!'"

Of course, while the NRA cannot be solely blamed for the tragic death of 20-year-old Chris Martinez, the father has a real point. Despite the consistency of mass shootings in America — Aurora, Colo.; Fort Hood, Texas; Virginia Tech — any attempts to pass gun control legislation have been largely lambasted or ignored. Georgia recently passed a law allowing guns in state and local buildings, airports, churches and bars. Florida is also considering legislation to waive all firearm restrictions during state emergencies like riots or hurricanes. And since the December 2012 massacre at Sandy Hook Elementary School, in Newtown, Conn., 12 states have passed laws allowing guns to be carried in schools, and 20 more are considering such measures.

According to local police, Rodger owned three legally purchased 9MM semi-automatic handguns, and over 400 rounds of unused ammunition were found in the car after Rodger shot himself following a police chase. In this sense, the UCSB can be added to the long list of senseless mass shootings wherein legally purchased guns were used. In fact, in the roughly 60 mass shootings in America between 1982 and 2012, the vast majority of the guns used were legally obtained.