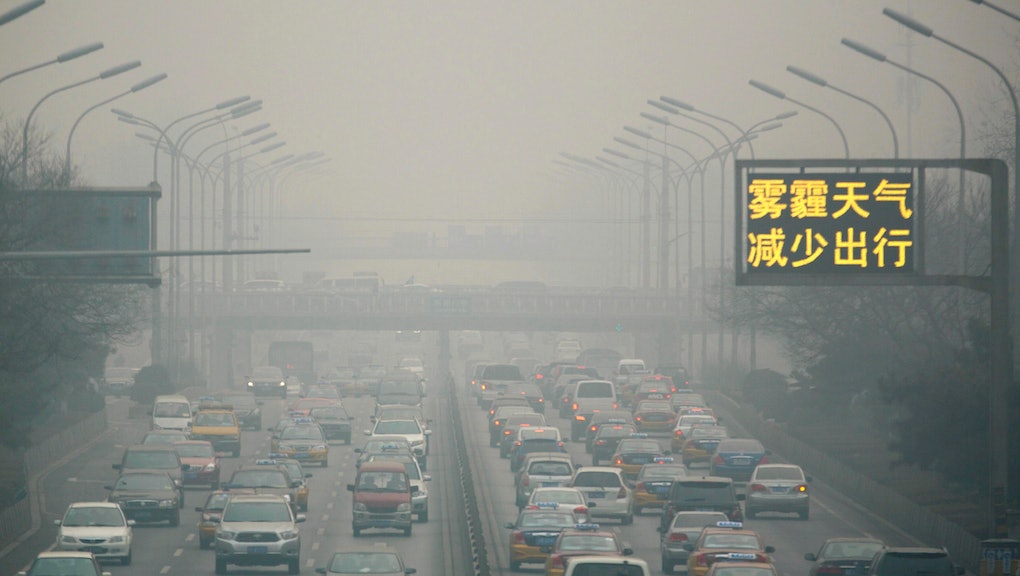 The news: You know that China's air pollution is getting bad when its own scientists are describing it as "a nuclear winter" and calling Beijing "barely suitable" for human life.

Well, desperate times call for desperate measures, and Chinese officials announced on Monday that they will be taking a drastic step to reduce the country's pollution: taking over 5 million cars off the street.

According to the newly-released policy document, around 5.33 million cars that fail to meet China's fuel standards will be eliminated this year. Roughly 330,000 trashed in Beijing alone. The smog-filled capital will also try to cap the total number of cars on the road to 5.6 million this year.

The background: This isn't China's first attempt to reduce the number of cars on the road. Beijing has previously offered subsidies to drivers who voluntarily turn over old vehicles to be scrapped, and cut new licenses by 37% (to 150,000) last year.

But that hasn't been nearly enough to curb automobile purchasing and the subsequent air pollution. By 2012, there were 240 million cars in China — 15.1 million of which were added that year alone. And according to researchers, vehicle emissions in Beijing are responsible for nearly one-third of dangerous airborne particles known as PM 2.5, while burning coal contributed 21%. Even the new, ambitious plan to get 5 million cars off the road might not be enough to make a significant dent.

Why this is important: China's air pollution problem cannot be overstated. Things have gotten so bad that some cities have resorted to shooting giant water cannons into the air and confiscating outdoor grills. The country's infamous smog is reportedly driving away foreign talent, forcing tourists to buy smog insurance and leading the wealthy to take flight. Air pollution levels in Beijing are 20 times higher than safety standards — and can even be seen from outer space. On top of all that, China's smog is getting so big that it's affecting weather patterns around the world and now hurting America.

The Chinese government has pledged to move power plants and clean up the air in cities. Unfortunately, not much has been done so far. In the meantime, 40% of the 7 million people worldwide who died from air pollution in 2012 were from China.

Under these dire circumstances, it's completely understandable why the Chinese government would take such a drastic step — the question is whether it will be drastic enough.