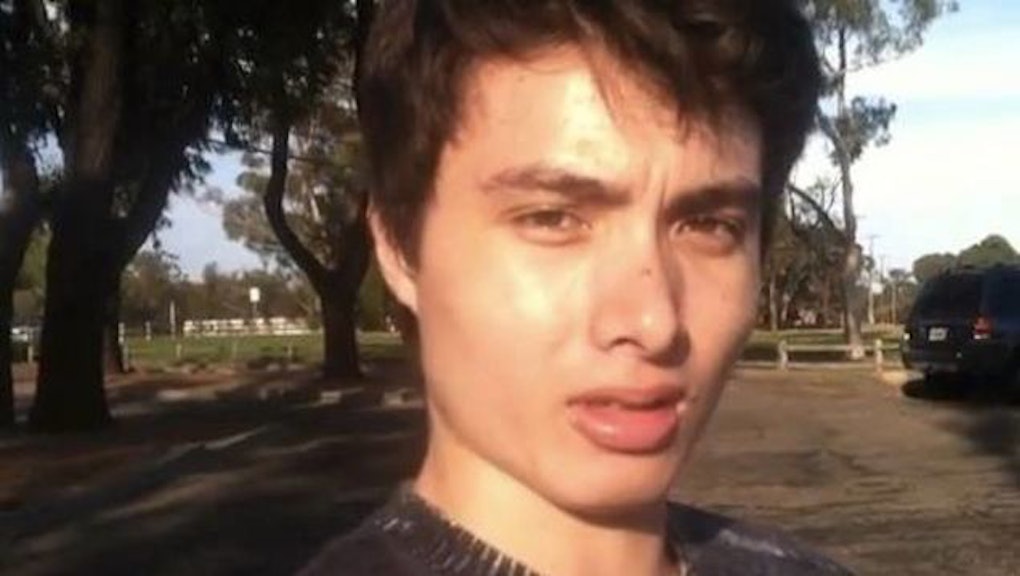 On Friday, 22-year-old Elliot Rodger murdered six people and injured 13 others in a killing spree that rocked the college town of Isla Vista, Calif. He committed suicide shortly after.

But what might have been dismissed as the isolated work of a disgruntled madman gained broader significance when his motives were uncovered:

According to Rodger, his problem was women.

He felt they deserved “retribution” for the “years” of sexual rejection he’d endured, during which he – “the perfect guy” and a “supreme gentleman” – had been slighted in favor of “obnoxious brutes” and “undeserving men.”

Yet a look at Rodger’s Internet history reveals a racist ideology almost as pronounced as his misogyny.

To better understand his intentions, this is an important realm to explore.

First: Many outlets have shown that Rodger was active on misogynist web forums. According to the Southern Poverty Law Center, he made the following comments on a PUAhate.com thread in January:

“Today I drove through the area near my college and saw some things that were extremely rage-inducing.

“I passed by this restaurant and I saw this black guy chilling with 4 hot white girls. He didn’t even look good.

“Then later on in the day I was shopping at Trader Joe’s and saw an Indian guy with 2 above average White Girls!!!

“What rage-inducing sights did you guys see today? Don’t you just hate seeing these things when you go out? It just makes you want to quit life.”

These comments belie a number of particularly racist presumptions, namely that “white girls” occupy a privileged space into which the encroachment of “lesser, undeserving” men of color should “induce rage” in white men. Rodger’s idealization and objectification of white women also makes their rejection a noteworthy source of ire.

“On the day of retribution,” he explains in a YouTube video, “I am going to enter the hottest sorority house of UCSB and I will slaughter every single spoiled, stuck up, blonde slut I see inside there.”

But that wasn’t all: In another thread that month, Rodger responded to a post from an Asian male asking if a specific pair of shoes would help him “attract white women”:

When the other man responded by posting photos of himself with a white woman, Rodger grew irate:

“Full Asian men are disgustingly ugly and white girls would never go for you. You’re just butthurt that you were born as an asian piece of shit, so you lash out by linking these fake pictures. You even admit that you wish you were half white. You’ll never be half-white and you’ll never fulfill your dream of marrying a white woman. I suggest you jump off a bridge.”

That Rodger’s misogynist worldview was so strongly linked to a racist one is telling. America has long been invested in the affirmation of white beauty, but to hear these ideas echoed by a mass murderer signals the oft-forgotten fact that racism and sexism are inevitably – and often violently – intertwined.

Rodger was not just angry with women. He was angry that white women would reject him for men he deemed racially inferior. Like the Ku Klux Klan and men’s rights activists before him, he felt entitled to certain considerations by virtue of his whiteness and maleness, and when he thought these were being denied, he saw himself as a victim and lashed out.

That his mother is of Asian descent is neither ironic nor contradictory. It merely exposes the degree to which such philosophies have been internalized across racial lines.

So what should we make of this? Rodger was a violent misogynist, indeed, but his misogyny was justified and bolstered by his racism. This does not discount the role of either: Such forms of oppression only grow stronger with the incorporation of others, and in the end, both maintain a similar set of systemic inequalities.

Perhaps no purer indication of this exists than a comment Rodger made in a Bodybuiling.com forum days before the murders:

“It’s been my life struggle to get a beautiful, white girl,” he wrote.

That so many died to placate this man’s sexual and racial anxieties should weigh heavily on all Americans.