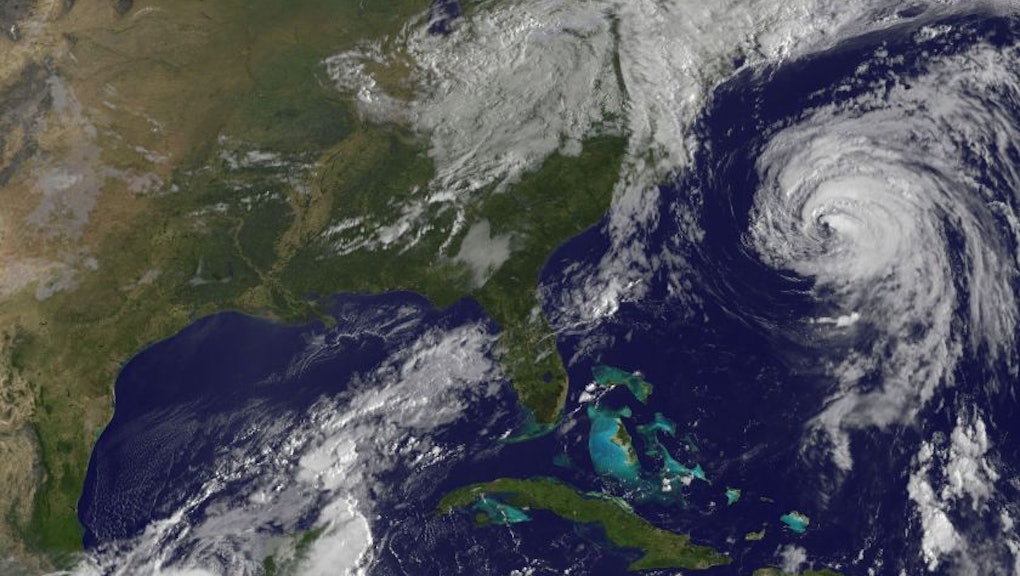 The news: The National Oceanic and Atmospheric Administration (NOAA) announced last month that the level of carbon dioxide in the air has reached 402 parts per million (ppm), the highest it's been in at least 800,000 years.

While that alone is enough cause for concern, there is even more bad news: The World Meteorological Organization (WMO) announced Monday that CO2 concentration averaged more than 400 ppm for all of April across the Northern Hemisphere — for the first time in human history.

"Time is running out," WMO Secretary-General Michel Jarraud said in a statement. "This should serve as yet another wake-up call about the constantly rising levels of greenhouse gases which are driving climate change. If we are to preserve our planet for future generations, we need urgent action to curb new emissions of these heat-trapping gases."

The background: While the report is certainly concerning, this rising trend has been observed for some time. CO2 levels above 400 ppm were first recorded in 2012, and since then, the threshold has been breached with increasing frequency. Since the advent of the industrial revolution — and the rising use of fossil fuel — carbon dioxide concentration has increased 40%.

"CO2 concentrations haven't been this high in millions of years. Even more alarming is the rate of increase in the last five decades and the fact that CO2 stays in the atmosphere for hundreds or thousands of years," NASA scientist Erika Podest said at the time.

"This milestone is a wake up call that our actions in response to climate change need to match the persistent rise in CO2. Climate change is a threat to life on Earth and we can no longer afford to be spectators."

Typically, CO2 levels tend to be higher in the Northern Hemisphere because it has more land, vegetation and industrial sources of emission. But the WMO predicts that if the current rate of increase — two to three ppm per year — is maintained, CO2 concentration will exceed more than 400 ppm across the entire planet by 2015 or 2016.

Nearly 200 governments have agreed to reach a deal by the end of next year to limit the average temperature increase to two degrees Celsius (3.6 degrees Fahrenheit) above pre-industrial times. Climate experts believe that CO2 concentration should be kept below 450 ppm in order to reach the goal.

Why this is important: Once carbon dioxide is emitted, it can stay in the atmosphere for hundreds, even thousands, of years. Along with other greenhouse gases, CO2 absorbs outgoing solar radiation and redirects it toward the planet, increasing temperatures over time, meaning that the emissions we contribute now will affect generations to come.

While some global warming can be attributed to natural trends, the sharp increase in CO2 levels since the advent of industrialization indicates that much of it is man-made. A recent UN report affirmed with 95% certainty that humans have "been the dominant cause of the observed warming since the mid-20th century."

Over time, high CO2 concentrations can lead to rising sea levels, heat waves, droughts and floods, posing serious risks to coastal communities and the human food supply. Experts believe that these worsening environmental conditions could exacerbate existing civil conflicts regarding land, food and water. Even insurance companies have taken the government to task for not adequately addressing the effects of climate change

But Congress is still skeptical. Just last week, House Republicans voted to prevent the Department of Defense from using its funding to address the issue. Despite the overwhelming scientific evidence, they are failing to recognize that rising CO2 levels and the subsequent effect on the climate are no longer a political issue — they are a scientific reality.