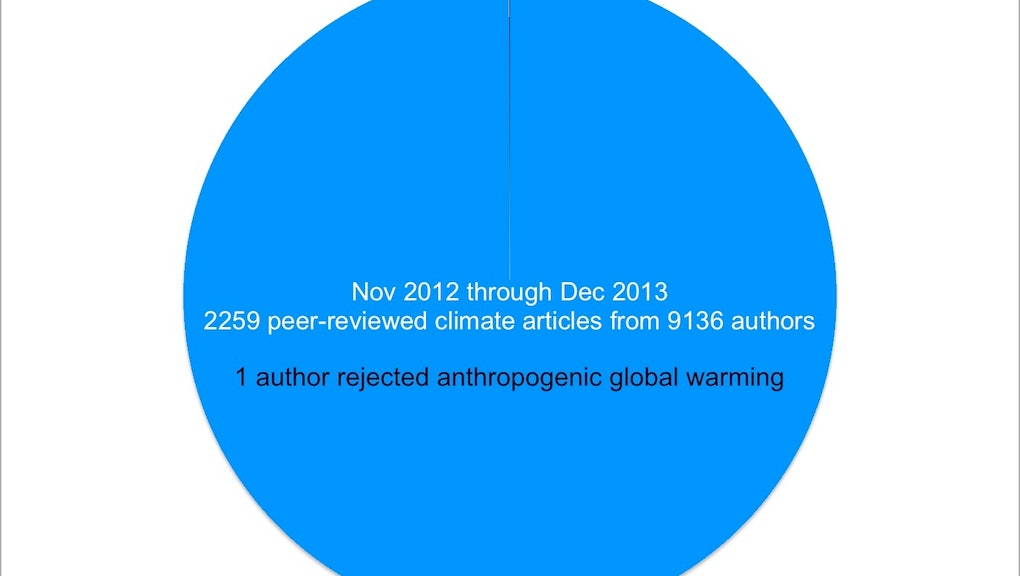 The news: House Republicans just voted to deny the reality of a changing climate, passing an amendment sponsored by Rep. David McKinley (R-W. Va.) that seeks to prevent the Department of Defense from using its own funding to address the long-term impacts of climate change.

On Thursday, 227 Republicans voted in favor of the amendment, with just three against, while only four Democrats supported it and 189 were against.

"None of the funds authorized to be appropriated or otherwise made available by this Act may be used to implement the U.S. Global Change Research Program National Climate Assessment, the Intergovernmental Panel on Climate Change’s Fifth Assessment Report, the United Nation’s Agenda 21 sustainable development plan, or the May 2013 Technical Update of the Social Cost of Carbon for Regulatory Impact Analysis Under Executive Order."

The background: Basically, the legislation is designed to prevent the Department of Defense from planning for climate change-based contingencies or using their resources to prepare military bases and other installations for higher sea levels and warmer weather.

Executive Director Mike Breen of the Truman National Security Project slammed the bill, saying "You can't change facts by ignoring them. This is like trying to lose 20 pounds by smashing your bathroom scale."

Reps. Henry Waxman (D-Calif.) and Bobby Rush (D-Ill.) wrote a letter in strong opposition to the amendment, saying "The McKinley amendment would require the Defense Department to assume that the cost of carbon pollution is zero. That's science denial at its worst and it fails our moral obligation to our children and grandchildren."

The background: Either congressional Republicans are intentionally lying about the scientific consensus on climate change, scientifically ignorant or just playing politics. Republicans have voted against recognizing climate change before — 24 Republicans on the House Energy and Commerce Committee rejected an amendment that would have recognized the dangers of global warming. But the science to back them up just doesn't exist. A recent study found that just one in 9,000+ authors published in peer-reviewed journals denied that climate change was man-made. Out of 2,259 peer-reviewed articles, just one challenged the theory of anthroprogenic climate change.

Apparently, Republicans don't believe in the scientific consensus. McKinley doesn't think CO2 is tied to higher temperatures or that those higher temperatures actually exist. On the House floor, he announced that "Climate change alarmists contend that man-made CO2 is the cause of climate change. Most people may not realize that 96% of all the CO2 emissions occur naturally."

Scientists worry that global warming will cause the collapse of major ice sheets and raise sea levels. Former military leaders of the Center for Naval Analyses' Military Advisory recently announced that "climate change is no longer a future threat — it is taking place now. It observes that climate change serves as a catalyst of conflict in vulnerable parts of the world, and that projected changes in global migration patterns will make the challenges even more severe." Insurance companies are freaked out by the possibility of unsustainable costs. And a changing climate is already visible via NASA imagery and thousands of reports.

The Department of Defense realizes the challenges of a changing world and has moved to generate more solar power and pursue a net-zero energy policy.

Chilling effects: While partisan bickering like this may look silly from the outside, the consequences of climate change denialism will be very real. The White House warns that "Climate change presents a major challenge for society. There is mounting evidence that harm to the nation will increase substantially in the future unless global emissions of heat-trapping gases are greatly reduced."