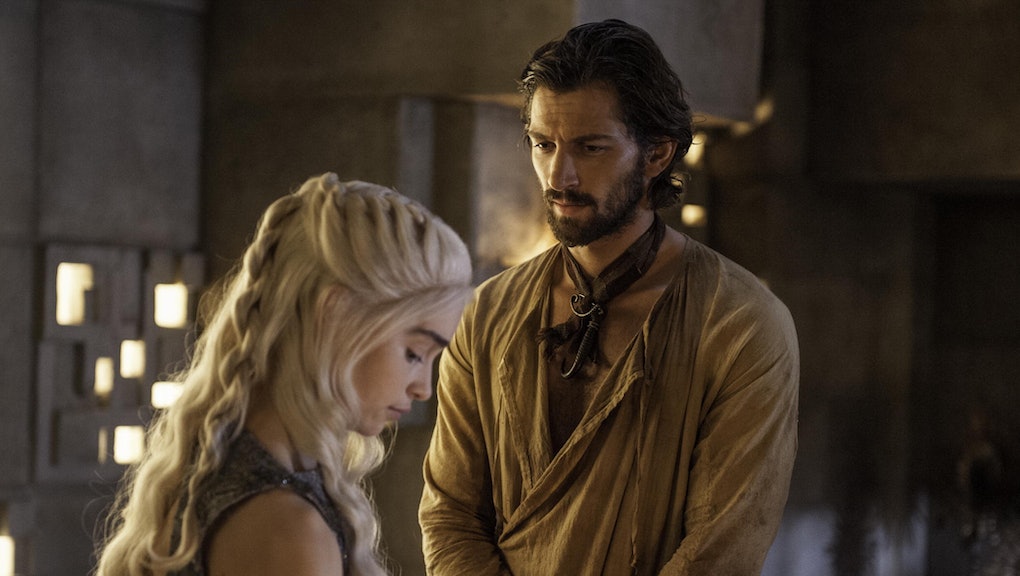 Plots, sex and bloody, bloody murder. Those are just three of the defining on-screen trademarks of the brilliance that is HBO's Game of Thrones. But a look behind the scenes of the television adaptation of George R.R. Martin's A Song of Ice and Fire novels is just as fascinating as an hour in front of the television. (And not just because Theon Greyjoy is played by Lily Allen's brother. What now?)

Below, we explore some fun facts and figures about the world beneath the Seven Kingdoms.

Some GoT episodes cost even more than $6 million to make. Season 2's action-packed "Blackwater" skated in with a reported price tag of $8 million.

2. That's partly because it's filmed on three continents and in six countries.

To date, producers have traveled to the United States, Croatia, Morocco, Malta, Iceland and Northern Ireland for filming, with locations often overlapping in order to meet deadlines. Rumor has it GoT will add Spain to that list for Season 5.

3. Northern Ireland says 'Game of Thrones' has brought more than $100 million to their economy.

The Northern Irish home base of Game of Thrones isn't the only location to benefit from the massive production. The ancient Moroccan city of Ouarzazate is said to have had a 100% increase in bookings after becoming the face of Yunkai and Pentos.

4. The writers room has never had more than six members.

In addition to George R.R. Martin and series showrunners David Benioff and D.B. Weiss, all three of whom are credited for each episode, the show has used series executive story editor Bryan Cogman (five episodes), Divergent screenwriter Vanessa Taylor (three episodes) and serious nerd cred writer and producer Jane Espenson (one episode) to flesh out the novels for television. In comparison, True Blood and The Walking Dead, two other television adaptations of popular books with sprawling casts, have had 14 and 20 total writers respectively.

5. Showrunner David Benioff was already an accomplished Hollywood screenwriter before 'Game of Thrones.'

Though he might not have been well-known before GoT, Benioff has written several hit movies, including Troy, 25th Hour and X-Men Origins: Wolverine. He's also married to actress Amanda Peet.

6. Benioff and Weiss convinced George R.R. Martin to let them adapt the books by answering the question, "Who is Jon Snow's mother?"

Having worked in Hollywood himself, most notably on the late '80s television series Beauty and the Beast, Martin was skeptical of anyone adapting his life's work. Luckily, Benioff and Weiss got their pitch — and the answer to Martins question — right.

7. Benioff and Weiss want to end the series in Season 7 or 8, even if the books are not finished.

Martin has written five novels in what he says will ultimately be a seven-book series. But it took him a whopping 15 years to write those first five. Benioff and Weiss hope Martin pulls through, but are willing to move forward without him, books or not.

8. Luckily, Martin has already told Benioff and Weiss his ending.

Benioff and Weiss say they have the "broad strokes" of what Martin plans to do with the book series ending, but none of the specifics. Martin hopes he'll be able to finish the books before the show ends.

9. The show almost didn't make it to air because the original pilot was so bad.

10. Emilia Clarke's Daenerys has become so popular, 146 baby girls were named Khaleesi in 2013.

It seems the recast was the right choice. The made-up name Daenerys didn't exist outside of Martin's novel before the HBO show aired. Parents, however, have not been unified in the name's pronunciation.

Costume designer Michelle Clapton says the most time-consuming part of the design process is breaking in the wardrobe. She says breaking in the costumes helps the show avoid that cheap Renaissance Fair-fantasy look.

12. Those awesome title credits won an Emmy too.

The now-iconic opening was created by the prolific short-form filmmaking studio Elastic, which also created the credits for Masters of Sex, The Americans and True Detective. While GoT's opening is meant to evoke the maps at the beginning of the Lord of the Rings books, it was Elastic's creative director who came up with the "world within a sphere." Pay attention to the shadowed areas beneath the surface of the map; there are cogs working there, too.

13. King's Landing, Winterfell and the Wall have appeared in every single one of those title sequences.

The locations that have appeared the least? Pentos (once), Braavos (twice) and the Twins (thrice).

14. The title sequence is just one of many 'Lord of the Rings' connections. Another? Gandalf's sword Glamdring is part of the show's Iron Throne.

It took prop-maker Gavin Jones two months to construct the iconic behemoth out of wood and steel. The finished product stands an impressive eight feet tall.

15. But 'Game of Thrones' is no 'Lord of the Rings.' Martin's main criticism of LotR is that it lacks religion.

George R.R. Martin may be a major fan of Tolkien's work, but even he feels Lord of the Rings was missing some ritual and worship. (Middle-earth did have its own forms of religion, but nobody's here to debate the finer points of the Silmarillion.)

Though Martin refers to himself as a lapsed Catholic, he says he finds religion and spirituality fascinating and that he wants to believe in an afterlife.

The actor who plays Tyrion Lannister had the final "and" credit in Season 1, with Sean Bean taking top billing. That all changed when Dinklage won the Emmy in 2012.

17. More than two feet of human hair is used to make each of the show's Emmy-nominated wigs.

Kevin Alexander, one of Game of Thrones' hair designers, says that each piece can cost up to $7,000.

18. Two languages, Dothraki and Valyrian, were created for the television show from only a few words.

In the books, Martin only provided a few examples of the foreign tongues spoken on Game of Thrones. So the show's producers enlisted linguist David J. Peterson, founder of the Language Creation Society, to develop Dothraki and Valyrian into full, grammatical languages that the show's actors could actually speak.

Despite having created the 4,000-word Dothraki dictionary, Peterson says fanboys still try to correct him on his pronunciation.

19. 'Game of Thrones' airs on the SyFy channel in Portugal and TNT in Switzerland.

Despite being an HBO show, Game of Thrones doesn't always appear on HBO in other countries.

20. It’s also the most pirated show on television.

BitTorrent says the 2013 season finale of Game of Thrones was downloaded via their site 5.9 million times. (Compare that with Breaking Bad and The Walking Dead at 4.2 and 3.6 million downloads, respectively.)

And HBO doesn’t seem to have a problem with that. CEO Richard Plepler told Buzzfeed it was a "terrific marketing vehicle for the next generation of viewers."

21. David Benioff and D.B. Weiss have added moments of sexual violence that were not in the books.

22. Martin has defended these moments, despite outrage from fans.

The author says rape and sexual violence are a part of his story because they illustrate one of the series' main themes, "that the true horrors of human history derive not from orcs and Dark Lords, but from ourselves."

Whether the sexual and other violence in Game of Thrones bears any resemblance to "how things were back then" in our own history may be another story.

23. But don't think all this means women don't watch 'Game of Thrones.'

Nielsen research says women make up about 42% of the shows viewers, making it more popular among women than comparable programs.

They've just been dead for millennia. The ancient breed is said to have been 25% larger than today's grey wolf. To recreate the beasts, the show uses Northern Inuit dogs that are digitally enlarged by visual effects specialists.

Kristian Nairn, the Irish actor who plays Bran Stark's hulking escort, came out earlier this year, making him the first openly gay actor of the show's 100-plus member cast.