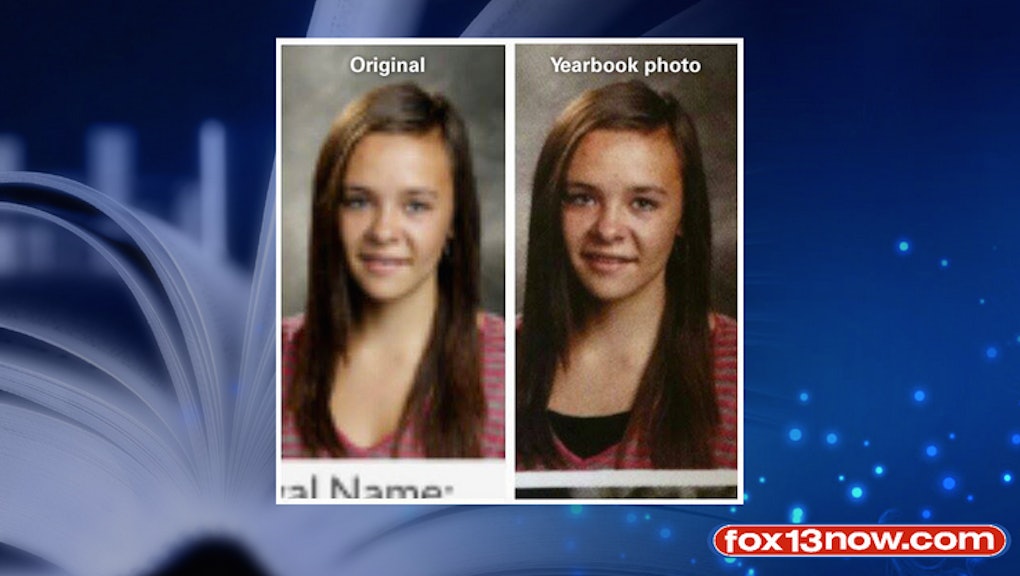 When female students at a Utah high school received their yearbooks this year, they were surprised to see that dozens of their pictures had been edited.

At least two dozen girls at Wasatch High School — no boys, obviously — had sleeves added, necklines raised or tattoos covered, ostensibly for modesty reasons, via Photoshop. While the whole modesty argument is debatable in itself, many of the students at the Heber City, Utah, school seemed most irritated because the school seemed to apply its post-production dress code arbitrarily; in one case, two girls were wearing the same top, and only one photo was altered.

The backlash has been rather swift. Jezebel's Rebecca Rose noted that the singling out the girls is especially problematic.

Why are they singled out? Because the school doesn't want to see a normal goddamn part of a young woman's body like her shoulders or clavicle exposed," Rose wrote. "It's got nothing to do with setting a standard for professional appearance in the workplace. ... This is all about making young girls feel ashamed and embarrassed about their bodies.

"We only apologize in the sense that we want to be more consistent with what we're trying to do in that sense we can help kids better prepare for their future by knowing how to dress appropriately for things," Terry E. Shoemaker, Wasatch County School District superintendent, told Fox13.

A better way to help kids learn in preparation for their future is to talk to them directly and engage them in discussion — not to lump your opinions on them post-hoc without asking their permission, explaining your reasoning or respecting their autonomy. As Townsend Harris High School (Queens, N.Y.) student Catherine Moskos wrote in her student newspaper last year, "If you want to teach us to be professionals then teach us how to make choices. Don't make them for us."

By editing these photos before publication, educators at Wasatch imposed their own opinions on the students and stripped from the girls their agency. As if there weren't enough body confidence issues surrounding high school students, now these girls feel uncomfortable about their yearbook photos, having been made by educational authorities to feel self-conscious about their bodies.

The larger problem is this excuse behind which the school is trying to hide: that covering up the collarbone has anything to do with a girl's future success. (It doesn't. A woman's "purity" has no bearing on her place in the world; she is more than her sexuality.) This incident highlights the notion that women's bodies are impure and shameful, that they should be covered up, lest they invite the wandering eyes and lusty desires of men, or lead other people to make unwarranted and illegitimate judgments about the person's behavior and lifestyle choices.

Wasatch High School is just the latest in a long string of educational establishments "slut-shaming" their female students — because it is almost invariably just the women — and teaching them that it's their fault if their male peers get distracted at school. Girls have been kicked out of prom, told not to wear clothes that show the curvature of the breast (which, for many women, is unavoidably anatomical) and banned from wearing leggings, all because it's distracting to the boys; a kindergartener was even forced to change her skirt because it was too short.

This is a side effect of a society that sexualizes women, then blames those women for her sexualization. It is a culture that gives men a free pass to disrespect women and allows women to disrespect each other — a culture that constrains women and teaches them that "our boys" are more important than the girls.

Would it not be more helpful to teach everyone respect for other people and responsibility for their own actions, rather than throwing a blanket over women so men can lark about and do whatever they like without interruption?