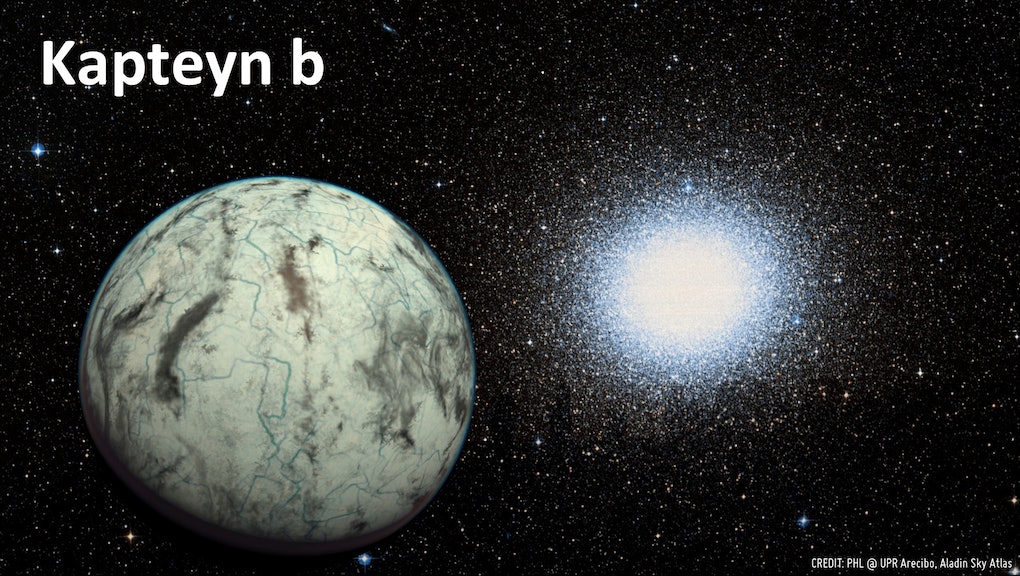 The news: It's been an exciting week for astronomers and planet hunters. On Monday, researchers at the Harvard-Smithsonian Center for Astrophysics announced the discovery of "a Mega-Earth," an ancient, rocky planet that has debunked previous notions of perquisites for life. Already, we have another planetary candidate that may be suitable for life.

On Tuesday, an international team of researchers announced the discovery of two planets orbiting Kapteyn's Star, a 11.5 billion-year-old star that is only 13 light years from our Sun. One of the planets, Kapteyn b, has mass five times the Earth's and orbits its star every 48 days. But most importantly, the planet is the right distance away from its star to maintain liquid water on its surface — a crucial requirement for life as we know it.

Not too hot, not too cold: Kapteyn b happens to exist in its star's "habitable zone," often nicknamed "the Goldilocks zone," which is a planet's optimal distance from its star in order to maintain liquid water on its surface. While around 1,800 exoplanets have been discovered so far, few meet the theoretical requirements: the right size and right distance from a star.

For instance, Kapteyn c — the other planet that was announced on Tuesday — orbits the star every 121 days, and the research team believes it is outside the habitable zone since water would freeze on the planet's surface.

This discovery has revealed the first exoplanet likely to support life. Since the discovery of Kepler-186f, astronomers have been on a quest to find more candidates. Along the way, they've also realized they might need to revise their initial perimeters. For one, the "Mega-Earth" announced this week is much larger than the previously theorized limits of a rocky planet.

But the discover of Kapteyn b is especially exciting because of how old it is. Like its star, it is estimated to be 11.5 billion years old — making it 2.5 times older than Earth. Its sheer age means that there is great potential that life developed on the planet at some point, even if it may not exist now.

"It does make you wonder what kind of life could have evolved on those planets over such a long time," Guillem Anglada-Escude, an astronomer part of the Kapteyn b discovery team, told NatGeo.