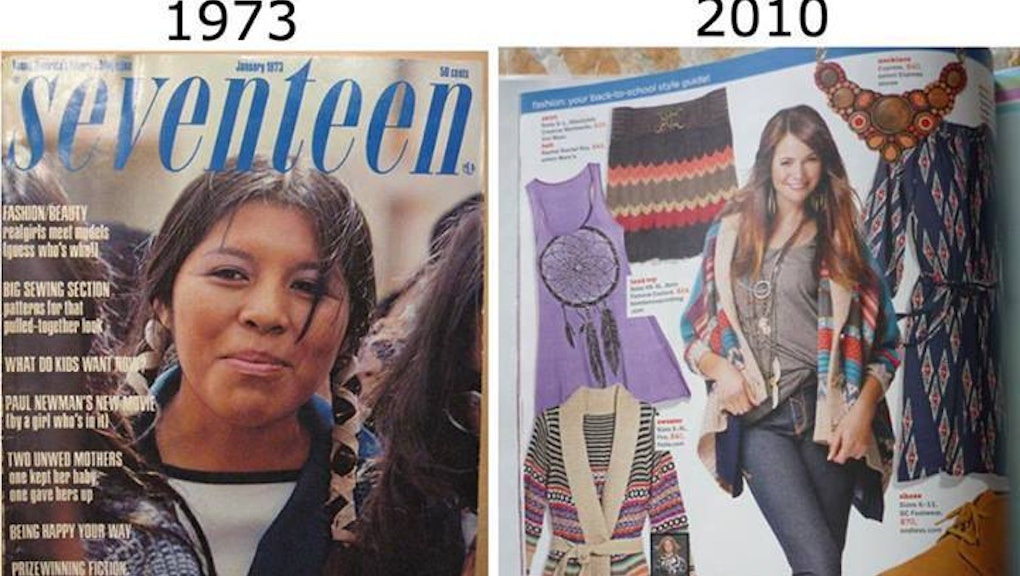 From Coachella to couture, the misappropriation of Native American culture has been dominating headlines in recent months — and those behind the headlines aren't so innocent themselves.

Bitch Media recently posted a photo to its Facebook page comparing a Seventeen cover from 1973 to one of the magazine's fashion spreads in 2010. Whereas the 41-year-old cover featured a natural-looking smiling Native American teenage girl and included a special report about "Today's Young Navajos," the more recent issue dressed a white girl in "sunset colors and woolly knits" for its so-called Navajo fashion spread.

On the Facebook post, many people expressed their disappointment at seeing what was "a pretty rad" and forward-thinking concept for a magazine feature in the '70s degrade over the decades into a cheap, commercialized fashion motif.

Seventeen is not the sole offender, of course; in recent months, Harry Styles, Victoria's Secret model Alessandra Ambrosio (following in the footsteps of her employers) and the singer Christina Fallin (daughter of Mary Fallin, governor of Oklahoma, which has a sizeable Native American population) all sparked controversy when they posed wearing headdresses. Heidi Klum similarly offended when she brought Germany's Next Top Model contestants to Utah to participate in a "redface" photoshoot, and just last week, Pharrell apologized for wearing an elaborate headdress on the cover of Elle UK, a stunt that had triggered the hashtag #NotHappy.

As Jarune Uwujaren explains at Everyday Feminism, there's a difference between cultural exchange — being aware of another culture and enjoying its beauties once you've been invited by its members to do so — and cultural appropriation, which is the claiming of another's traditions and symbols for your own personal use. "Using someone else's cultural symbols to satisfy a personal need for self-expression is an exercise in privilege," she writes.

The line between the two is hazy; most people wouldn't have a problem with Americans eating sushi and dancing to salsa music, for example. But clothing has strong links to personal identity and sacred symbols, which is why wearing a headdress — a status symbol, not a fashion accessory, in Native American culture — is inappropriate and offensive. "Sharing is great," Jessica Metcalfe noted in the Guardian, where she explained some of the legal issues of using the Navajo trademark or adopting Native American designs. "Unauthorized taking is not."

But cultural appropriation has a darker side, particularly in the case of Americans sporting Native American gear, because it harks back to an ongoing and powerful struggle between oppressors and those they subjugate. It's "a real issue because it demonstrates the imbalance of power that still remains between cultures that have been colonized and the ex-colonizers," Uwujaren said. That's one reason the headdress trend at Coachella sparked such a backlash: Because the land used for the festival — where wealthy white people lounge around in teepees — used to belong to Native Americans.

The other problem with cultural misappropriation is that it's reductive. It ignores the spiritual and historical elements of the culture and pushes a misinformed narrative propelled by Hollywood as much as by the fashion industry. It also lumps many elements of a multifaceted culture together, painting them with one brush instead of celebrating their individual identities. As Dwanna L. Robertson points out for Indian Country Today, "There is no such thing as a 'Native American' culture. There is no 'Native American aesthetic.' With 566 federally recognized tribal nations and another 250-plus state or unrecognized tribal groups, the U.S. enjoys at least 816-plus tribal cultures."

The Native American struggle is perhaps most visible in the current spat over the Washington Redskins' name, which is widely seen as a racial slur. But magazine spreads like Seventeen's "Navajo" feature, and celebrities' adoption of Native American symbols as accessories, can be just as damaging.