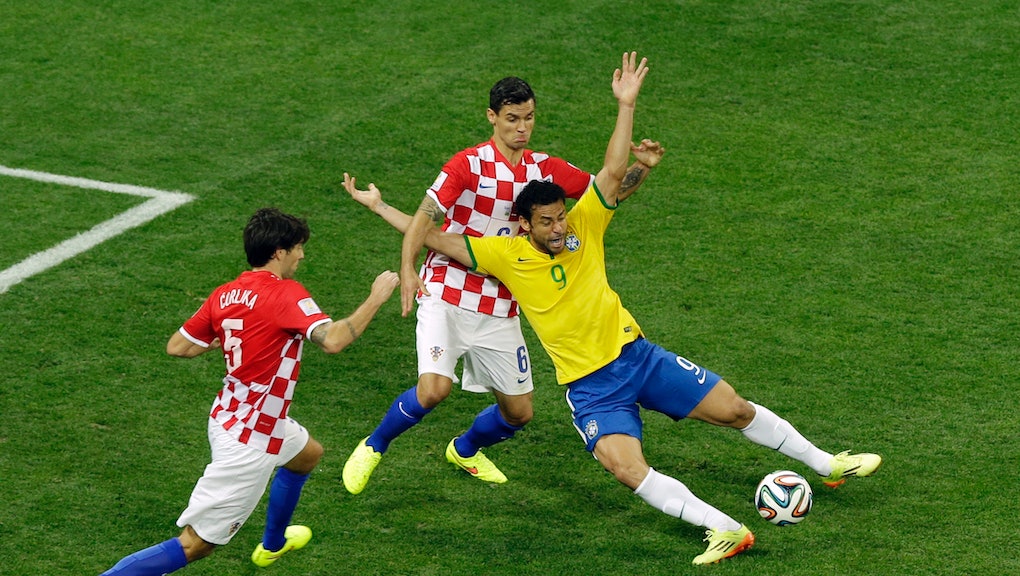 Mic Check — The World Cup's Bumpy Start, the Legacy of Gun Violence and Selfies at Auschwitz

The World Cup gets off to a bumpy start: Protests erupted on the streets of São Paulo on Thursday just hours before the opening of the World Cup soccer tournament, with the police dispersing demonstrators with tear gas and rubber bullets. The New York Times reports the protesters were largely peaceful, carrying banners criticizing FIFA. However, "at certain points some masked demonstrators also threw rocks and bottles in the direction of police, while lighting piles of garbage on fire in the street." See more photos and videos from São Paulo here.

Iraq's most vicious insurgents are now the richest terrorists in the world: After storming Iraq's second-largest city, shutting down the airports, freeing thousands of prisoners and displacing 500,000 residents, terrorist group ISIS robbed Mosul's central bank on Wednesday, making off with around $425 million. The money, along with a large quantity of gold bullion, will likely be used to "buy a whole lot of jihad," regional analyst Brown Moses said. "For example, with $425 million, ISIS could pay 60,000 fighters around $600 a month for a year." It's like Ocean's 11, but for a terrorist group so vicious even al-Qaida wants nothing to do with them.

What it's like to live your life after a mass shooting: Columbine. Virginia Tech. Aurora. Newtown. Isla Vista. Slate’s Emily Bazelon talks with families of shooting victims, who describe the struggle of lobbying for gun control and how they keep going: "There is the tendency to look for excuses. With each one, especially the mass shootings, people say: That happened because the shooter was mentally ill, or bullied, or something else. I think people hear the stories and think it's the person, not the gun. But when you look at the totality — at all the individual shootings, the ones the media doesn't cover — you see one thing behind all the stories is easy access to weapons.”

All right stop, collaborate and listen: Jared Keller's back with a brand new edition. Did we miss something you wanted to read about? Want to see us focus on an under-covered issue? Have a tip for the next edition? Email jared@policymic.com.