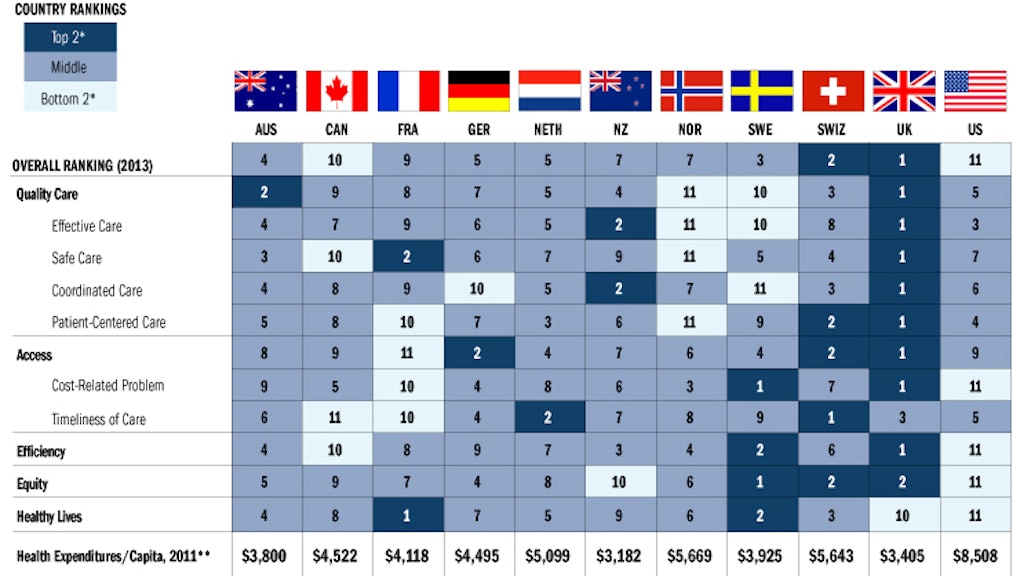 Out of 11 countries, a study conducted by U.S. think tank the Commonwealth Fund ranked the United States in last place. Americans report health issues less, have higher death rates and spend way more money on health care than residents of every other country surveyed.

"Most troubling," the report reads, is that "the U.S. fails to achieve better health outcomes than the other countries, and as shown in the earlier editions, the U.S. is last or near last on dimensions of access, efficiency and equity."

What is wrong with the U.S. health care system? As devastating as these survey results are, they reveal nothing new. This is the fifth time the United States has found itself on the bottom of the list; we took last place in 2010, 2007, 2006 and 2004 as well.

But still, a close look at the 2013 data highlights some deeply troubling trends. For one, the United States spends an astonishing $8,508 per person on medical care. The U.K., holding the top spot, spends $3,405 per person.

The second is high death rates, though this does not directly correlate with money spent, because in both the U.K. and the United States people are living shorter lives — specifically, by not treating conditions amenable to medical care compared to other countries. France, Sweden and Switzerland were ranked highest in the healthy lives category.

The third is the deep income inequality central to the U.S. economy, which impacts people's access and willingness to seek medical care. According to the survey, "Americans with below-average incomes were much more likely than their counterparts in other countries to report not visiting a physician when sick; not getting a recommended test, treatment, or follow-up care; or not filling a prescription or skipping doses when needed because of costs."

The (kind of) good news: The study was conducted before Obamacare was implemented. During that time, the limited access to health care was bogging down the U.S. health care system. The absence of universal health care caused many Americans to forgo coverage and/or treatment due to the cost.

Though even before the 2010 Affordable Care Act, the United States made advancements to the health care system that the Commonwealth Fund's survey noted. For example, the American Recovery and Reinvestment Act helped the United States implement better "health information technology" that makes medical records and medical information more accessible to patients and providers. With the technology, clinicians deliver more efficient and more effective care.

Can we make it out of last place? The U.S. health care system has been ridiculed for its inefficiency and lack of accessibility before, but Obamacare was supposed to fix that by making health insurance policies widely available for people across the nation.

The roll-out of Healthcare.gov, which became synonymous with failure last year, did not help efforts much. In 2013, a gorilla at the Bronx zoo was getting better medical care than most Americans.

Even Iran's President Hassan Rouhani joined in by poking fun at the system. He mocked Obamacare in February of this year with "Rouhanicare," as Iran guarantees health care for all its citizens.

We will have to wait for the next survey from Commonwealth Fund to come out to know if Obamacare has truly been as effective as initially intended. In the meantime, if the United States wants to rank higher, then the next step should include taking notes from the exemplary systems in Switzerland and the U.K.