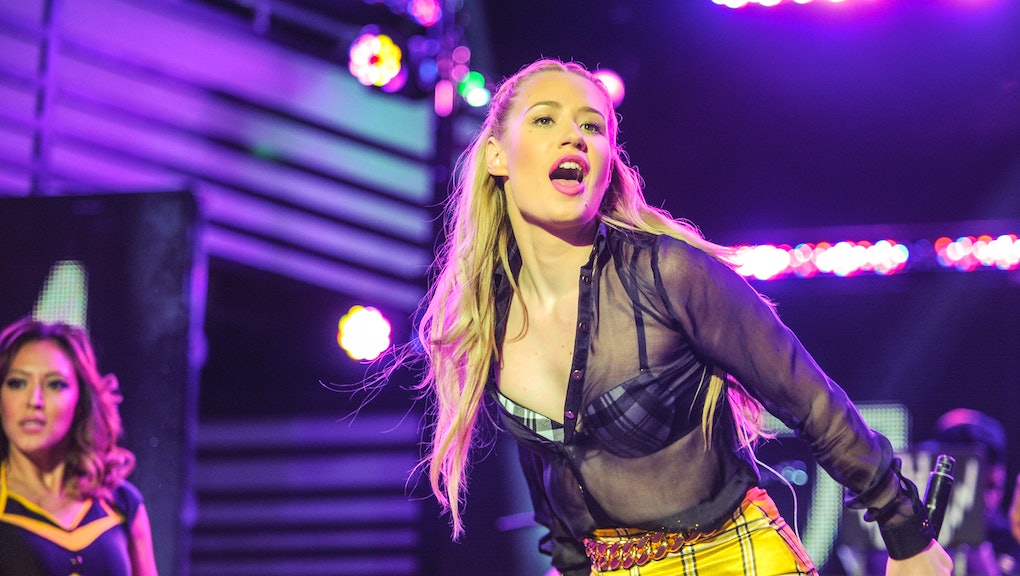 A Look Through Iggy Azalea's Digital Past Reveals Something Everyone's Overlooking

This Wednesday marked the fourth week that Iggy Azalea's "Fancy" was the most popular song in America. A few weeks ago, rapper Iggy Azalea achieved a feat that no musician or band other than The Beatles ever had: The Aussie topped the Billboard Hot 100 with that single while simultaneously snagging the number two spot as the featured artists on Ariana Grande's "Problem." That was the first time an artist grabbed the number one and two spots, since 1964 when the Beatles did so simultaneously with their first two entries on the charts. It's a huge deal.

Azalea went from being virtually unknown to riding a tsunami-size wave of fame in a second. That means that one of the most well-known stars in America is still pretty unknown to America. For the most part, then, we've all missed the fact that, while Iggy Azalea is celebrated as a socially-conscious star, she's far from it.

Before she was Iggy Azalea, she was Amethyst Amelia Kelly, a small-town girl from a hippie town 400 miles north of Sydney who had something to prove. Her mother worked as a house cleaner and her father was a landscaper. She found rap when she was 11 years old, listening to Tupac Shakur's "Baby Don't Cry." By 14, Azalea was rapping herself. In 2007, right before she turned 16, Azalea moved to the states alone to pursue a rap career — lying to her mother that she was just going on vacation. Like any young artist, she struggled for years. That all changed when she released her music video for "Pu$$y," which went viral and began building the hype she's ridden to the top of the charts. A few years later, her moniker is one of the most recognized names in all of music — she's one of the most talked about people in the press.

There's no denying Azalea's pop appeal — she writes catchy songs — but it is worth questioning the fact that she's often celebrated as a socially conscious pop star. A recent Us Weekly article titled, "Iggy Azalea Speaks Out on Twitter, Slams Online Bullies," is fairly typical of the tone most take towards Azalea — she's a strong woman in a man's game, sticking up for herself. Bloggers and members of the media have crowned her as a game-changing feminist. It has been said that she is both important for women and helping reclaim female sexuality. She's coded as revolutionary and progressive. It's easy, then, to ignore the fact that Azalea makes a habit of being really offensive.

Last year, people started to point out that many of the musician's tweets from before she was in the limelight were extremely racist and homophobic. Bloggers posted some of her controversial radio interviews and tweets, including a tweet from 2010 that read, "This Asian lady on the plane tried to act like she didn't understand me I told her ass bitch u gone know English today cause that’s my seat!" Among many, many others:

Many of those tweets were subsequently deleted, but Azalea acknowledged them — taking to Twitter and other social media to defend herself, basically using the "I have [Asian/Black/Gay/Lesbian] friends" defense, also claiming that her Twitter was, at one point, meant just for friends and family, as if that excused her.

But it doesn't, and it doesn't come close to addressing the insidious ignorance of her music. In her song, "D.R.U.G.S," she raps, "When it really starts I'm a runaway slave ... master." Though she later apologized, it was another item on the list of her indiscretions that have been mostly swept under the rug. Take Azalea's music video for "Bounce," set at an Indian wedding — and heavily fetishizing Asian culture — for absolutely no apparent reason. She's similarly been accused for appropriating a "blaccent" when rapping, reducing a real identity to a stylistic trick.

A common defense of that kind of appropriation is that it's a popular music convention — not the musician's attitude. She does, after all, date a black man. But the fact that Azalea has so brazenly evinced even worse beliefs in interviews and social media shows that this problem runs way deeper than any one music video — that whether or not she means it she's habitually ignorant and offensive towards marginalized groups. In a radio interview last summer, she affected a compassionate stance towards Australian Indigenous populations — explaining that 'Aboriginals' don't like to live in "confined spaces," so they wreck the housing projects that Western civilization generously provided for them in order to sleep under the stars because "that's the way they live." In fact, the problem of Aboriginal housing is much more complicated and unjust than Azalea made it out to be, as pointed out by Australian bloggers and this 2009 article for The Australian. Romantic as Azalea's stance is, most people of all backgrounds do, to some degree, enjoy shelter.

This, then, is the person we have topping our charts. She is undeniably talented — an extremely compelling pop star. But just because she's ascended to fame so rapidly doesn't mean we can afford to forget what attitudes she brings to her music. The top two spots on the chart are reserved for the most influential songs in America. A flippant stance towards our nation's marginalized groups shouldn't be behind them.