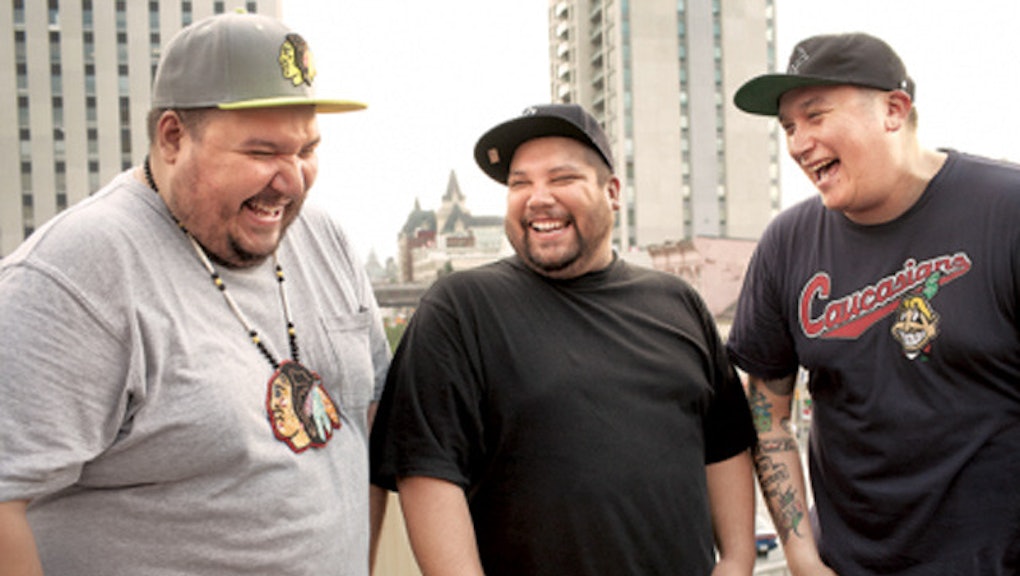 The shirt is part of the continuing controversy over the use of Native American imagery for the logos of professional sports teams like the Washington Redskins. Simultaneously sarcastic and witty, the shirt — a play on Chief Wahoo and the Cleveland Indians logo —  draws attention to franchise names and mascots that demean Native Americans while lampooning the creators and perhaps the most vocal supporters of such team mascots: Caucasians.

Sadly, the backlash to the band's creative statement has already begun, as music festivals across Canada have reportedly been flooded by emails calling for A Tribe Called Red's removal from the lineup. In an ironic twist, many of these critics claim that the t-shirt is "racist" against white people.

Let's be very clear. Contrary to popular belief, there is no such thing as "reverse" racism.

A Tribe Called Red, a band that has made headlines recently for its energetic anthems, is also made up completely of Aboriginal Canadians known as the First Nations people. The innovative group's shirt makes a satirical yet incisive statement about the ridiculous idea that it's OK for non-white cultures to be mocked via mascots and team names that culturally appropriate customs and images held dear — and even sacred — to the originators. Although Dan Snyder and his supporters have attempted to argue to the contrary, even the Oxford English Dictionary entry for "redskin" notes that it's a dated, derogatory term.

Of course, Native Americans and their First Nations peers aren't the first to have their cultural artifacts and representations casually disrespected in the mainstream.

The Redskins controversy recalls other racist mascots and tropes such as the "Mammy," a denigrating portrayal of female African-American domestic workers who cared for white families and nursed white children. It's often seen in movies and cartoons such as Tom and Jerry.

Then there's Frito Bandito, the original advertising character for the Frito-Lay snack, whose now retired image and mannerisms included a wearing sombrero and a gold tooth, wielding two handguns and speaking broken English. And that's two of many examples from the extensive history of racist mascots.

In recent years, though, it's "ironic" hipster racism that's even more insidious than the overtly racist media images commonly presented in the 19th and 20th century. Over at Racialicious, various writers, including Carmen van Kerckhove, highlight why gestures and humor explained away with post-racial ideology actually does more harm than good.

And a recent study commissioned by MTV shows that nearly half of 20-somethings believe that "racism against whites is as big a problem as discrimination against racial minorities."

Perhaps that's part of a larger problem — a culture that feels uncomfortable talking openly and honestly about issues of race, and that refuses to acknowledge even the most subtle forms of racism when consistently presented with them.

But that's not stopping advocacy groups and supporters from forcing the issue.

Although the Washington Redskins have been the main focus of national outcry, they're not the only organization stirring controversy over racist team names and imagery. Other professional sports teams, including the Cleveland Indians, the Chicago Blackhawks and teams at various colleges across the country have been challenged as part of the larger movement. Earlier this week, the United Church of Christ's Central Atlantic Conference released a statement that positions them with an increasing list of groups calling for team name changes and even boycotts.

In a landmark move, the U.S. Patent and Trademark Office has signaled that it, too, disagrees with the use of the Redskins logo in particular, by canceling its trademark. Ruling in favor of five Native Americans who petitioned the office, government officials noted in their decision that it was clear the term 'Redskins' was "disparaging of Native Americans, when used in relation to professional football services, at the times the various registrations involved in the cancellation proceeding were issued."

As for A Tribe Called Red's t-shirt, its popularity has skyrocketed so much in recent weeks that the makers, Shelf Life Clothing, say they're currently backlogged 2 to 3 weeks to complete orders. Clearly, these clothes have struck a nerve.

So before calling the t-shirts "racist," maybe it'd be a better idea to reflect and learn more about why organizations and bands such as A Tribe Called Red have to be so vocal about culturally appropriating memes like these in the first place.