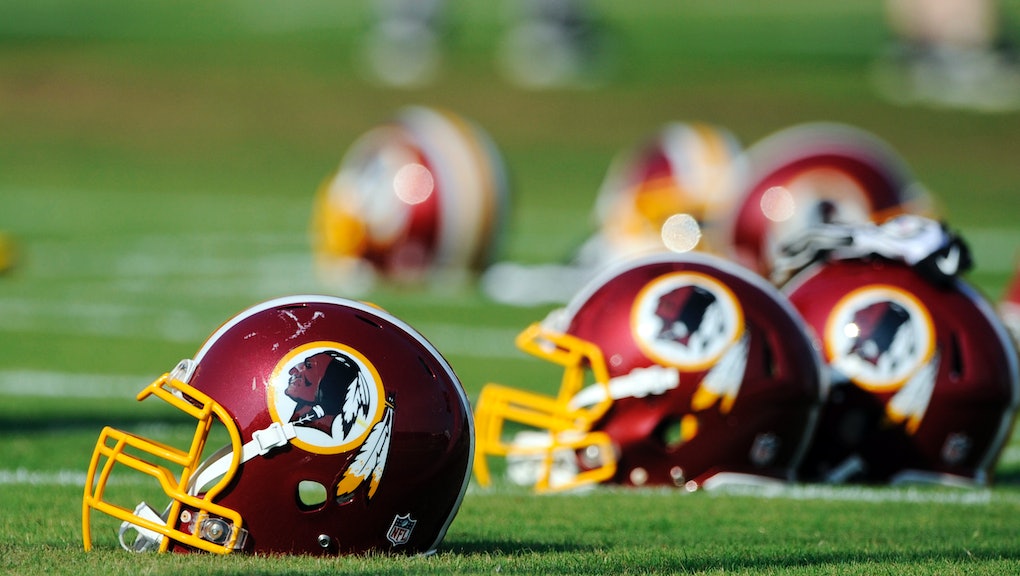 The U.S. Government Sends a Serious Message to the Washington Redskins

Big news in the world of sports: In a landmark ruling, the U.S. Patent and Trademark Office has canceled six federal trademarks registered for the NFL's Washington Redskins' team name.

The decision was issued Wednesday morning, when the Trademark Trial and Appeal Board concluded that the name is an ethnic slur "disparaging to Native Americans" and therefore ineligible for trademark under federal law.

The board's opinion read: "We decide, based on the evidence properly before us, that these registrations must be cancelled because they were disparaging to Native Americans at the respective times they were registered."

All of these combined to "demonstrate that the word 'redskin' is an ethnic slur." The PTO previously rescinded the team's trademark protections in 1992, but that ruling was overturned in federal court over a technicality that plaintiffs claim has been fixed in this case.

It's about time: Widespread sentiment against the Redskins' name has never been more pronounced.

With Native American groups across the country calling for change, 50 members of Congress urged NFL commissioner Roger Goodell to "take action to remove the racial slur from the name of one of [NFL's] marquee franchises."

Redskins owner Dan Snyder tried placating his critics in March by forming a charitable initiative directed toward Native American communities, but the people weren't having it:

"For almost eighty years the National Football League and its Washington franchise have exploited a racist Indian caricature, turning it into a billion dollar brand while completely ignoring the needs of real Native American children, families, and elders," Rep. Betty McCollum (D-Minn.) wrote in an email to ThinkProgress.

"Now, team owner Dan Snyder wants to keep profiting from his team's racist brand and use those profits to attempt to buy the silence of Native Americans with a foundation that is equal parts public relations scheme and tax deduction."

"What an insult," added activist Suzan Shown Harjo. "This is a stunt."

Why this matters: While the name has yet to change, the revocation of its trademarks at least puts a dent in the organization's business practices.

Without patent protection, the "Washington Redskins" title opens up to any number of outside uses, none of which the team can take legal recourse against. Further details have yet to be released, but as of now, this can be considered a solid victory in the fight against bigotry in professional sports.

The team is fighting back: In a statement, the team said they'd appeal the decision — and would win. Bob Raskopf, the trademark attorney for the Redskins, cited in the statement a similar 2003 appeal on the name which the team won. That appeal hinged on the fact that evidence "is insufficient to conclude that during the relevant time periods the trademark at issue disparaged Native Americans..."

Next step: Actually changing the name.