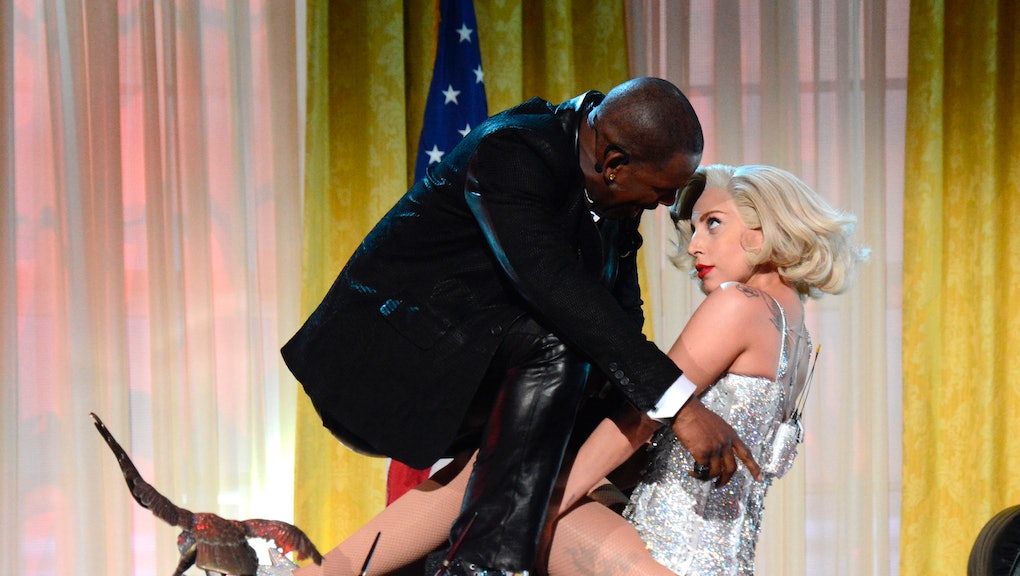 It isn't hard to remember when Lady Gaga was the unimpeachable queen of pop. Her controversial persona and wild antics were revolutionary, in part, because they often flew in the face of modern pop's rampant sexism, countering with body-positivity and sexual liberation. But times have been tough for Gaga of late, and they're only getting tougher after a video recently leaked of Gaga doing something many thought she never would: portray rape in a positive light.

TMZ recently released the remnants of an abandoned music video for "Do What U Want," directed by infamous photographer Terry Richardson. In the video, a "doctor" (R. Kelly, M.D.) plans to perform a medical procedure on Gaga; once she is unconscious, he will do whatever he wants with her body, including impregnating her. This isn't just about some messed-up malpractice. It isn't just another shocking Gagaism. The "Do What U Want" video exemplifies and celebrates acquaintance rape.

Although the music video was never completed — Gaga claimed it was scrapped because of "time constraints" — the disturbing 30-second clip is enough to turn the strongest of stomachs. It would be bad enough to see Gaga molested and unconscious on an operating table, but this video goes to extra lengths to portray an especially prevalent sort of rape. In the clip, she's shown placing her trust in a familiar doctor purporting, as doctors do, to help her. As soon as she's unconscious, he turns his operating room into an orgy. 73% of sexual assault is perpetrated by someone the victim knows and likely trusts. This, then, is a horribly insensitive, flippant portrayal of something all too common in our culture.

But there's even more to the film than that: It seems to enact and legitimize the fantasies of the two known sexual predators behind its creation: Terry Richardson and R. Kelly.

Director and longtime Gaga collaborator Terry Richardson is a famed photographer, but recently he's been even more famous for allegations that he has severely demeaned and even assaulted the women he works with. In a recent article for Jezebel, a woman accused Richardson of attempting to force oral sex on her by shoving his erect penis near her mouth. Another victim said Richardson ejaculated into her eye.

The accusations go on and on, but sadly so do his accolades — he has photographed Miley Cyrus (a self-proclaimed feminist), Chloë Sevigny, Lena Dunham (another active feminist), Sky Ferreira and many other celebrities, both male and female, who are considered progressive. But as the Change.org petition against him states, "Terry Richardson is negatively influencing media with his supposed exploit[ation] and abuse of certain models." A video like this is exactly how that kind of influence runs rampant in our society.

The Gaga video also features singer R. Kelly, who has repeatedly faced allegations of rape and pedophilia. Hits like "Ignition (Remix)" and "I Believe I Can Fly" mean that, like Richardson, he has an even bigger platform to showcase his behavior and attitudes than the victims of his actions ever will.

Although in the past, Lady Gaga has proclaimed that she doesn't consider herself a feminist (and has certainly encountered controversy before), she has become a symbol of modern pop feminism. That's why this video is such a betrayal. Her songs and music videos show her taking her sexuality into her own hands. Consider her "Alejandro" music video, in which she models consensual sexual play by retaining autonomy even in group sex. "Telephone" is even more iconic: Joined by modern feminist icon Beyoncé, Gaga pays homage to Thelma and Louise and Kill Bill, both movies that feature powerful female protagonists. "Born This Way" is pretty much the theme song for self-acceptance, important to both the LBGT and feminist movements. At every step of her career, controversial or otherwise, she's at least been fully aware of the issues.

It's unclear, then, why Gaga would halt her long fight for personal empowerment to make a video that glorifies rape. It's a betrayal of the millions of fans who have been inspired by her messages of personal acceptance — the people who have found solace in her Born This Way Foundation and her music. This video isn't edgy or cool. It's downright destructive, and modern music has enough trouble when it comes to women without Lady Gaga pitching in. The video was pulled, mercifully, because her team knew a backlash would follow. But real progress isn't covering your tracks: Real progress is never making the video in the first place.