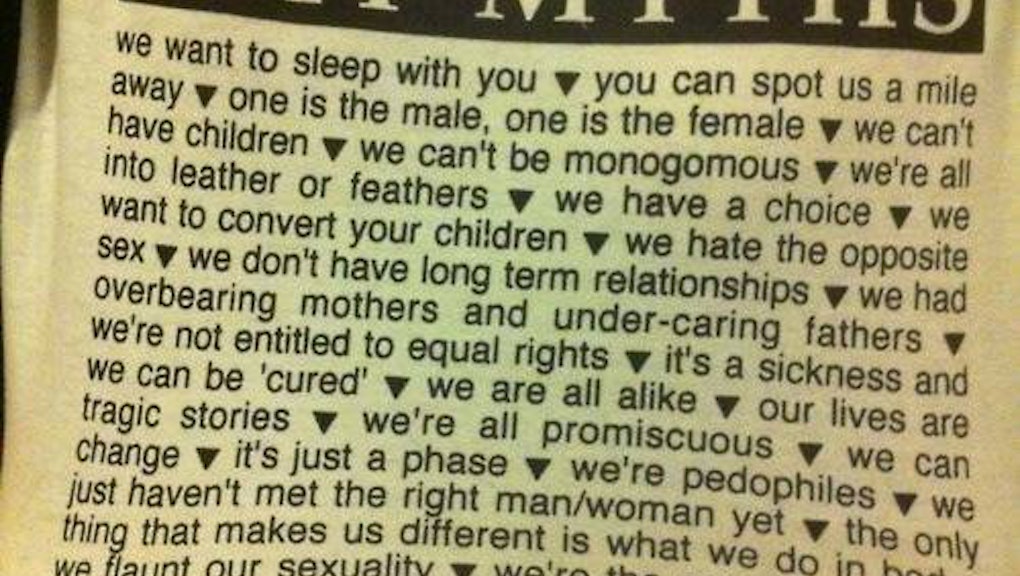 The Biggest Lies About LGBT People, Debunked on One T-Shirt

June may be LGBT Pride Month, but that doesn't mean that people around the country still don't struggle to be accepted for who they are or who they love.

Take the atmosphere created by Texas Gov. Rick Perry's recent remarks, for example, which likened being gay to struggling with an alcohol addiction. This idea, based on the equally wrongheaded (not to mention consistently disproven) theory that being gay is a behavior akin to addiction, is also part of his state's new Republican Party platform.

Because LGBT issues currently enjoy unprecedented levels of support around the country, statements like Perry's could be dismissed as silly banter. Unfortunately, in reality, they still carry weight, aiding in the perpetuation of homophobic falsehoods that are socially and politically destructive for LGBT rights.

Several of the most popular misconceptions about LGBT people recently resurfaced in this photo of a pretty spot-on T-shirt posted to Facebook.

While the shirt is meant to be tongue-in-cheek, the message it sends is a serious one. As we approach the anniversary of an important milestone for the LGBT community — the Supreme Court's rulings striking down the Defense of Marriage Act and California's Proposition 8 — it's important to remember that the fight for LGBT equality is far from over. Indeed, Americans need to continue to root out and eradicate these types of myths if we are ever to build a society where people of all orientations, genders and identities are accepted without prejudice or malice. One way we can begin to affect change is by becoming more empowered and educated.

Here are a few of the stereotypes from the shirt, debunked:

1. Homosexuality is a mental illness that can be cured.

While Perry and his counterparts can compare homosexuality until they are blue in the face, they are dead wrong, according to the American Psychological Association (APA).

In fact, according to the APA's official stance, there is "insufficient evidence to support the use of psychological interventions to change sexual orientation." Same-sex attractions and behaviors, they say, are "normal and positive variations of human sexuality."

Even the foremost nonprofit organization promoting reparative therapy — therapy meant to "restore" heterosexual desires — admitted that it was wrong. Exodus International shut down in July 2013 after 37 years of operation. While announcing their intent to dissolve, the group's leaders apologized to the many families and gay people who they hurt by perpetuating the belief that homosexuality is against God and needs to be fixed through faith-based counseling.

In the largest study to date about gay parenting, researchers at the University of Melbourne found that children of same-sex couples are doing as well as or doing better than kids raised by heterosexual couples. The interim report, released in June 2013, said the study was based on general health indicators and family cohesion.

Similarly, in a policy statement released by the American Academy of Pediatrics, the organization of primary care doctors noted that scientific research shows no "cause and effect relationship" between parents' sexual orientation and the well being of their children.

But that didn't stop bigots and critics from recently blasting two black gay fathers, Kordale and Kaleb, who use their Instagram to display the everyday routine and care for their three children.

3. LGBT people are pedophiles in disguise.

Earlier this year, Russian President Vladimir Putin equated gays with pedophiles, citing that as a reason why he's opposed to endorsing civil rights for LGBT people in his country. Speaking just before the Sochi Olympics, Putin said Russia must "cleanse" itself of homosexuality in order to increase the country's birth rate and vibrancy.

According to the APA, heterosexual and gay men are equally likely to sexually abuse children, as men are the perpetrators in the vast majority of cases. However, the organization noted, "A perception that most perpetrators are gay men is a myth and harmful stereotype."

4. HIV/AIDS is a "gay disease" caused by the LGBT community.

The origins of HIV, the virus that causes AIDS, has been traced by researchers to African chimpanzees, although how the virus spread to humans remains unknown.

The myth that HIV is a gay disease springs from a salacious — and unproven — story that claims a man once had sex with an animal carrying the infection, eventually spreading it to humans. Although common enough to have become part of Western lore, the National Institutes of Health's findings indicate that this claim is almost certainly wrong.

In fact, based on the biology of the HIV virus, such exposures occur most commonly in the context of bushmeat hunting and "must have occurred through cutaneous or mucous membrane exposure to infected ape blood and/or body fluids."

Regardless of the cause, what began as a virus initially discovered among gay men in New York is now widely recognized as a global health crisis for heterosexual and gay people alike. Numbers from the Centers for Disease Control show that men who have sex with men are the subgroup most heavily affected by HIV, with more than 302,000 deaths since the epidemic began. That's compared with about 85,000 deaths of people who contracted the virus through heterosexual relations.

5. LGBT people are all promiscuous and don't care about relationships.

Although this stereotype in particular is often directed toward gay men, LGBT individuals across the spectrum are also on the receiving end of this type of targeted slut-shaming.

There's a widespread belief that gay people have more notches on their belts than their straight counterparts. But the actual numbers don't quite add up that way, at least according to research, such as this 2010 study conducted by dating site OkCupid.

Based on users' answers to matching questions, the median reported number of sexual partners was the same for gay and heterosexual people, regardless of gender. In addition, 98% of gay people reported hitting the hay with 20 or fewer partners versus 99% for heterosexuals.

Believe it or not, the results of a study released in 2013 suggested that gay men generally have "significantly fewer" sexual partners than they did 10 years ago, the sharpest decline represented among men younger than the age of 24.

One of the factors cited was the increasing legalization of same-sex marriages — otherwise known as more widespread acceptance and respect for their kind of love.

MSNBC host Rachel Maddow and noted LGBT advocate said it best when it comes to civil liberties, "Rights are not supposed to be put up for a vote. They‘re not a popularity contest."

Unfortunately, that's still the reality in America, where the success of many LGBT initiatives continues to hinge on the attitudes of individual elected officials and voters. Even after Edie Windsor's landmark victory versus the Defense of Marriage Act in the Supreme Court last June paved the way for the recent spate of state marriage equality rulings, there's still much more work to be done.

Despite years of activism and a wave of support, only 19 states and the District of Columbia, as well as eight Native American tribes, have laws recognizing same-sex marriages. In most states, workers can still be fired simply for being an LGBT person, regardless of whether or not they are out, and without legal protections.

Those are just a few in a long list of everyday rights that many LGBT people don't have, but that most straight and cisgender people take for granted.