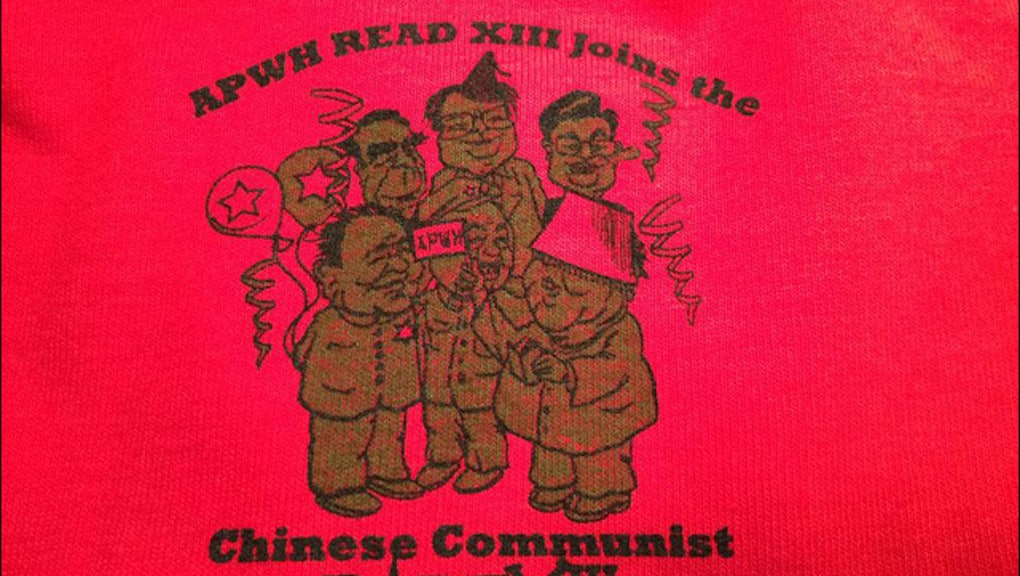 Looking for another reason to hate the AP exam? Look no further.

Not only are your test graders unconscionable hard-asses, they apparently get into some pretty racist shenanigans when you're not around.

The news: Members of the Educational Testing Service (ETS) gather every year in Salt Lake City to grade tests. Seems innocent enough. Only this year's festivities were marred by controversy: According to Hyphen Magazine, attendees reading the AP World History exam in June were sold this head-scratcher of a t-shirt as a souvenir:

To put it in perspective, those who bought it were primarily high school teachers and college professors. Many wore it during the last day of the gathering.

Damn. The shirt was intended to reflect the test's theme, which concerned an essay question about Chinese communism. Stereotypical "yellowface" imagery aside, critics say the shirt also commoditizes and trivializes a highly sensitive era in Chinese history, including Mao Tse-Tung's Cultural Revolution, which claimed 1.5 million lives between 1966 and 1976.

Some readers objected to the shirt upon seeing its design, but it was produced anyway. And when an undisclosed party complained about it to the ETS, the Chief Reader allegedly "apologized for people being under the 'impression' that the orientation was culturally insensitive and inappropriate" — a half-assed apology if ever there was one.

But what else is new? The commercial use of stereotypical depictions of racial minorities has been a hot-button issue of late. The campaign to change the Washington Redskins' team name comes to mind. But perhaps a more apt comparison is Chief Wahoo, the mascot for the Cleveland Indians:

The cartoonish minstrelsy of his appearance has angered a growing legion of fans, who've responded by removing him from apparel containing his likeness:

Yet despite constant protests, the people producing such images seem to have missed the memo.

What happened next in Utah: When a graduate student attendee wrote a letter of complaint about the shirt to the ETS's Director of Human Resources, the organization responded with a longer and seemingly more sincere apology:

Nevertheless, it seems absurd that this kind of thing keeps happening, especially at a gathering of people tasked with educating our nation's children.

On the other hand, it explains a lot. Welcome to post-racial America.