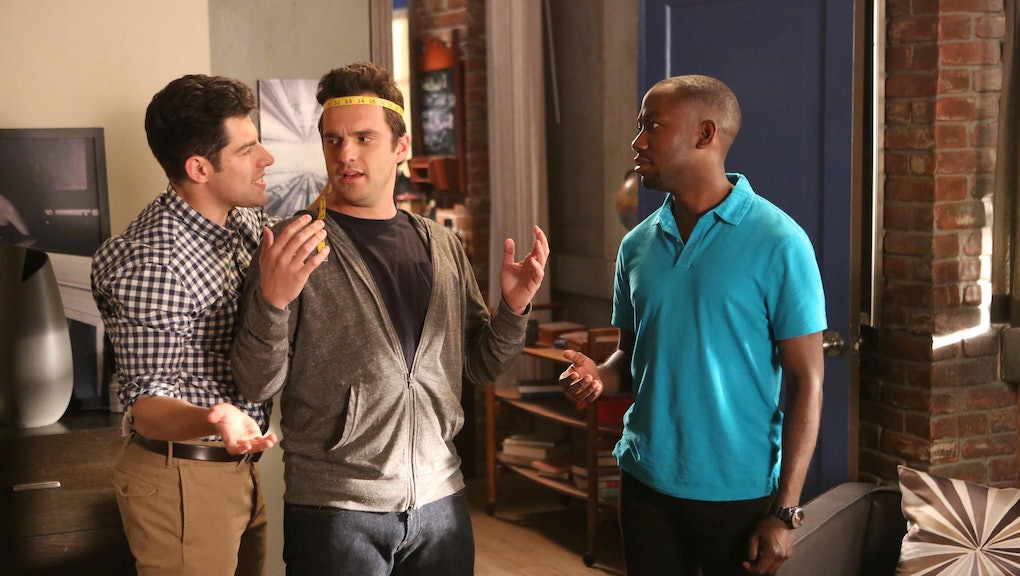 9 Damaging Sitcom Stereotypes That Need to Be Retired Immediately

It's a rule of comedy writing that laughter comes from our ability to play with the realities of daily life — stereotypes, common denominators and universal experiences are all fair game and make for a reliable laugh. Friends and Seinfeld made this idea into something of an art form and touchstone for our generation: Isn't it funny that we all have artsy friends who play the guitar for strangers? Isn't it funny that your roommate is such a control freak?

Those stereotypes, while often benign, become dangerous when they're the only representation of a community we get, like having the entire Asian-American populace reduced to high-strung nerds and Yellow Panic stereotypes. The "sassy gay friend" can be funny, but it's less funny when we don't have other gay friends.

With that in mind, here are nine typical sitcom characters who have definitely passed their expiration dates, and perhaps should never have been on television to begin with.

1. The One Whose Asperger's Is Hilarious

For many, Asperger's is a serious condition that makes it difficult for people who have it to relate to those around them or form lasting relationships. But on sitcoms, being on the spectrum is a wacky plot device to cue a laugh track. The Big Bang Theory makes Sheldon's hinted-at condition into a case of "People with Asperger's Say the Darndest Things." It is less so an opportunity to normalize autism than it is to exploit it for pratfalls.

If you want to see a great depiction of living with Asperger's, check out Max's storyline on Parenthood, which is realistic without ever turning into a Lifetime movie.

In romantic comedies, you take your female lead down a peg by having her fall in a mud puddle or having a passing car soak her in rainwater. On television, however, the way you make a woman feel relatable isn't by humiliating her with the elements, but by having her constantly humiliate herself. New Girl’s Jess is often forced to play up her awkwardness, as if a competent, beautiful woman were somehow threatening to TV audiences. She needs something quirky to make her unthreatening and relatable.

Think of it as the "Ann Perkins problem": When you don't have anything to write for a female character, just make her conveniently quirky. That way she doesn't have to get anything real to do.

3. The Asian Character Who Is Practically Long Duk Dong

It seems that sitcoms really haven't the slightest clue what to do with their Asian characters; they reduce them to stereotypes as crude as Long Duk Dong of Sixteen Candles fame. Even the late, great Gilmore Girls often forget Rory's Korean best friend, Lane, existed — until they paired her off with a husband and a baby to keep her busy onscreen. Let's not even get started on Lane's mom, Mrs. Kim. When Asian characters are in the picture, they're either reduced to sexy Asian schoolgirls (like, the assistant on Dads, played by Brenda Song) or sexless Mickey Rooney facsimiles, like Han on 2 Broke Girls.

What does it say when the best version of this character, Suburgatory’s Mr. Wolfe, didn't even make it to season 3? Asian characters on TV are like Gwen Stefani's Harajuku girls — fun background dressing until they just disappear. Here's hoping the pending Fresh Off the Boat will begin to right some of those wrongs.

4. The One Trying to Have It All

There's no problem with women on TV trying to "have it all," but the question is: Why do they have to? On Parks and Rec and 30 Rock, the female leads are enormously successful in their fields, but even those storylines suggest that, as a woman, success doesn't taste sweet unless you're eating for two. As Libby Hill points out in A.V. Club, sitcoms often boil all of a woman's accomplishments and achievements down to a pregnancy storyline, as if that's the only possible endgame for a woman.

Hill asks, "But should the whole of her journey be reduced to whatever's tied up in a little placenta package? Nope."

5. The Woman Whose Weight Is a Punchline

Too Fat to Fly may have been a British documentary, but its sentiment extends to American sitcoms. On shows like Super Fun Night, the jokes tend to be at the expense of women and their body weight. On Super Fun Night, audiences are often reminded that Kimmy (Rebel Wilson) is a "fat girl," with punchlines often being the ripping of her dress or the embarrassment she faces in front of the object of her affection. Compare this to Kevin James on The King of Queens, who rarely had to perform his weight because it just wasn't seen as being much of an issue.

Having plus-size women on television can be an incredible way to represent female characters of all body types, but the only way to normalize them is to stop making women's bodies the joke.

6. The Guy With the Inexplicably Hot Wife

Here's a thought exercise: How many shows can you name where a moderately attractive woman somehow lands a total hunk of a man? Can you name any?

Compare this to the list of shows with the opposite scenario: the aforementioned King of Queens, The Neighbors, Modern Family, Still Standing, Family Guy, The Honeymooners, The Big C, The Drew Carey Show, Grounded for Life. Even Carmela was too hot for Tony, but hey, at least he was a mob boss, and crime pays. I don't imagine there's much upside in being married to Jim Belushi.

7. The Gay One Who Isn't Having Sex

Being gay on TV is A-OK, as long as being gay means you wear bright colors and make Meryl Streep jokes rather than having fulfilling sexual or romantic relationships. The A.V. Club's Joshua Alston describes Modern Family's Mitchell and Cam (arguably television's most visible gay couple) as more "asexual frenemies" than a loving gay couple. He claims that even shows like Will and Grace and Happy Endings have struggled with giving the gay characters' love lives the same weight as the rest of the characters on the show.

Can you name a single one of Jack MacFarland's gentleman callers? Neither can I. Robert? Patrick? Stuart? Now I'm just saying gay names.

8. The Black Character Who Gets Forgotten

Glee has had all kinds of problems with Mercedes throughout its run. In addition to equating her blackness with sassiness, Ryan Murphy and company tend to forget about any of their female choir members whose names don't rhyme with "Craychel." In the case of Santana, that might have to do with offscreen issues, but Mercedes has been an afterthought from day one, despite being Michele's equal in the pipes department. There's a simple reason why: Your screen time on sitcoms is usually dependent on your ability to get paired off into a couple, and Glee only remembers Mercedes exists when she's dating someone, like Kurt (yeah, that happened) or the Trout Mouth guy.

9. The One Whose Hair Color Determines Her Intelligence

Television often has a way of color coding its female characters: Brunettes are the competent, down-to-earth, straight-man types, while blonds are the brain-cell-deficient comic relief. If life were 2 Broke Girls or The Big Bang Theory, hiring potential female job candidates would be as simple as a follicle test: Only brunettes need apply.

But then again, if life were 2 Broke Girls, we'd all be inexplicably rich enough to own a horse in Brooklyn while working wacky menial labor jobs.

Here's to a future of new characters, hopefully one's that aren't built from the same old tropes.