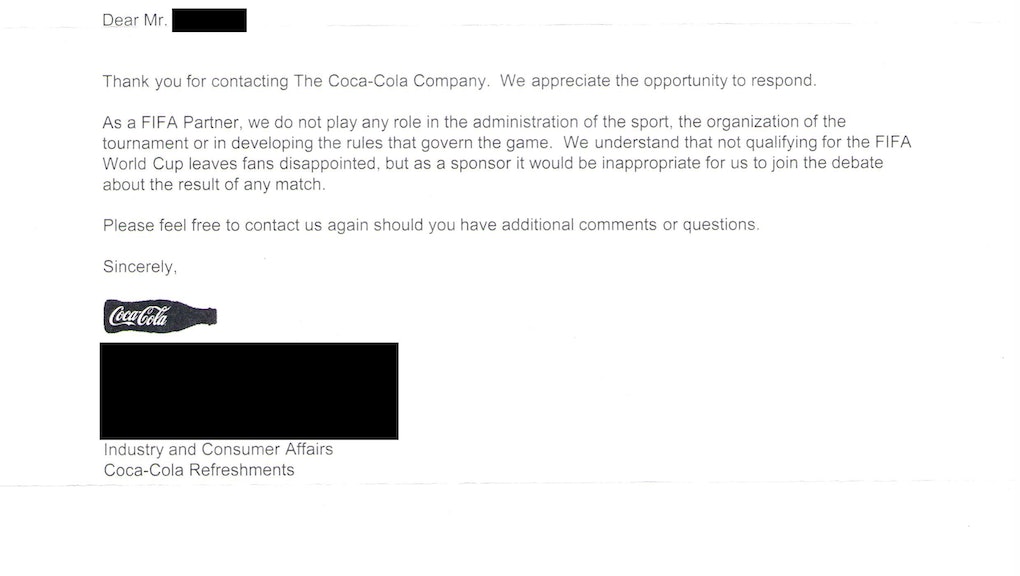 The news: The World Cup may still be going strong in Brazil, but controversy is already surrounding its 2022 host country Qatar, which has been accused of everything from bribery to human rights abuses — not that Coke knows anything about it.

As one of the sponsors of the 2022 event, one would expect that Coca-Cola's staying up to date on the scandals that have been plaguing Qatar. But when a Redditor sent the company a letter voicing concerns, they were taken aback by the nonsensical letter they received in response.

This was the original letter to Coca-Cola:

What happened? The most likely explanation is that some Coke intern accidentally used the wrong template, given the fact the Redditor's letter mentions nothing about "not qualifying for the FIFA World Cup." While this may be an isolated incident of bad customer service, Coca-Cola's general response to the allegations facing Qatar has been less than satisfactory.

Though James Quincey, the European head of Coca-Cola, has said the company is "concerned" about the corruption charges against Qatar, no one from Coke has publicly addressed the flagrant human rights abuses that are expected to lead to thousands of migrant workers' deaths in the lead-up to the World Cup.

So far, five of the six World Cup sponsors — Coke, Sony, Visa, Hyundai/Kia and Adidas — have expressed concern about the voting process behind Qatar's winning bid to host the event in 2022; only the airline Emirates has declined to comment.

Whether the letter above was a mistake or not, Coke and other companies' stance on Qatar's abusive labor laws have been far from adequate — and as more people speak up on the issue, they might not be able to ignore it any longer.