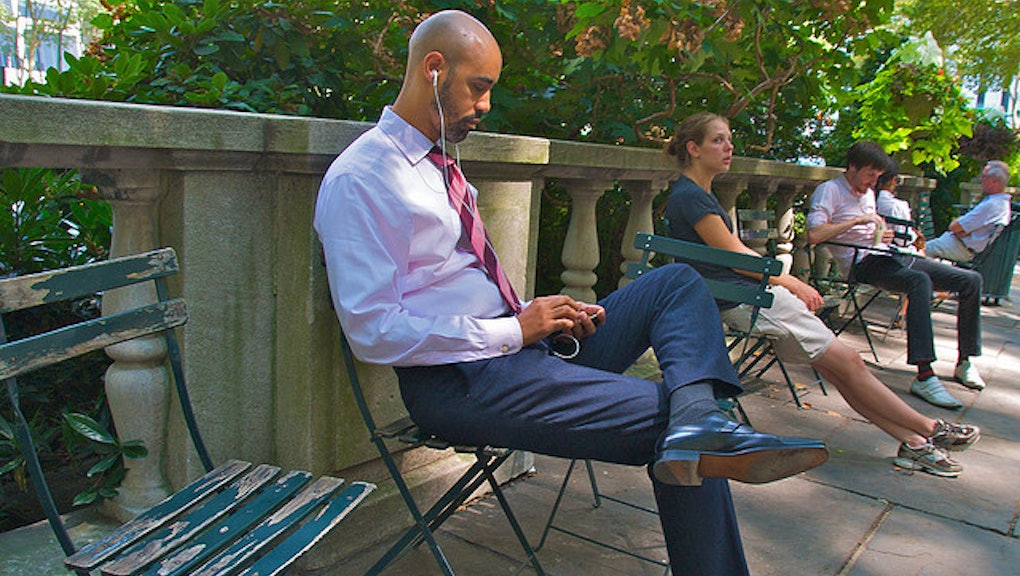 There was a time not too long ago, when albums were shorter and lunch breaks were longer, days when one could listen to almost any album in the hour one had to eat lunch. But alas, the lunch break is shrinking dramatically; a 2012 study found that 29% of American office employees don't even take lunch breaks, while 38% lunch at their desks and do light work like answering emails while eating. And that's a big problem for our nation's workforce.

Perhaps the best reason to take that break though is that even just a half-hour break at your desk allows you access to some of the greatest music of all time. Each of the following classic albums runs between 15-35 minutes — perfect even for our modern, stunted lunch break. But these are not chicken salad sandwiches — these are some of the most compelling and ingenious albums recorded in the last century of American music. Each has enough substance to keep you satisfied and fulfilled for the rest of your work day.

1. 'Act I: The Eternal Sunshine (The Pledge)' by Jay Electronica

Jay Electronica is one of the biggest names in rap, but he's never released an album. He's something akin to an urban legend in hip-hop. Bloggers are constantly whispering rumors that we're closing in on the release dates of mind-blowing new projects, but it's been seven years and we still haven't seen a proper full-length release. But the main reason he's so famous is one 17-minute-long EP.

This particular release, Act 1: The Eternal Sunshine (The Pledge), is made up almost entirely of samples from the Jim Carrey movie of the same name (with some soundbytes from Charlie and the Chocolate Factory, for good measure). It has no drums. It's full of lush symphonic soundscapes — a continuous 17-minute stream of the most intelligent, dexterous and fascinating rhymes you've ever heard.

2. 'A Love Supreme' by John Coltrane

While a lot of its chords and techniques are pretty out there, A Love Supreme is actually one of the more accessible classic jazz records. It doesn't take a deep understanding of the jazz form and conventions to understand what the artists are attempting to communicate.

John Coltrane intended his avant-garde opus to be a hymn to the glory of God. Coltrane's rapid runs and overblown honks provides a joyous, uplifting dissonance, while Elvin Jones' driving drums focus the movement of the sound, making it ecstatically danceable.

Flying Lotus' 1983 is a perfect introduction to one of hip-hop's best-known and most innovative beatmakers. It doesn't going too far off into the deep end of the electro-jazz his later albums have trended toward. The beats are still classic hip-hop, but the textures and instrumentation are as rich as any orchestra. Sifting through the long drawn-out chord progressions and interlocking melodic lines makes 1983 a fascinating meditative exercise.

4. 'Odessey and Oracle' by The Zombies

No band has ever written catchier and more cheerful hooks about prisons, psychoses and the horrors of being trapped in a decaying mind than the Zombies. Odessey and Oracle features all psychedelic pop album essentials. It's got sweet and surreal harmonies, off-kilter instrumentation and odd instruments (lots of dope harpsichord) and rich lyrical imagery.

And though it's got that lovely '60s graininess, a lot of the album feels very modern. It flopped when it was first released and almost never saw a U.S. release. The labels likely thought the mix of disorienting cheeriness and simultaneous darkness would be disconcerting for listeners. But really the Zombies were just ahead of their time. Artists since have worshipped them, and that kind of disorientation is all the rage now. Just look at Lana Del Rey, Grimes and Kanye's new music. The Zombie's Odessey and Oracle is one of the fonts of modern music.

5. 'You Made Me Realise' by My Bloody Valentine

My Bloody Valentine recorded this 5-song, 17-minute EP in a little less than a week in 1988. Compare that time frame to that of their following full-length Loveless — two years — and you get a sense of what we're dealing with here. You Made Me Realise has all the same infinitely complex layered guitar effects as Loveless, but they're presented in a much more raw and organic fashion. It makes the band's classic shoegaze sound come vibrantly alive and gives the impression of four humans in a room communicating and collaborating, rather than a madman working himself to death tinkering and retinkering with tape in the studio, which is the depressing reality of Loveless and most other My Bloody Valentine albums. This is a snapshot of a great band at their creative peak.

In putting together Bob Marley's Legend, his greatest hits album and also the best-selling reggae record of all time, the creators pulled more songs from Exodus than any other of his albums.

Marley recorded Exodus during a dark time in his life. He had just fled Jamaica after surviving an assassination attempt motivated by his apparent partisanship in the Jamaican elections. He exiled himself to London where the album was recorded and produced. It features an overarching, heavy darkness that comes from a deep understanding of the evils of the world. But that only serves to contrast brilliantly with the album's purer moments of hope, like "Three Little Birds."

For Smell The DA.I.S.Y., De La Soul's latest mixtape, the Plug rappers rehashed some of their most famous verses from their old albums, reworking the flows to fit the stylized, lilting boom bap of late master beatmaker J Dilla. However, the resulting songs don't feel like remixes at all — these are both brilliant retreads and a thorough introduction to one of the most influential hip-hop duos of all time. This half hour-long banger of a mixtape is modern golden age hip-hop at its absolute best.

One of The Roots' main intentions for ...And Then You Shoot Your Cousin is that it be short enough to consume in a single, uninterrupted, meditative sitting.

The album picks up sonically where incredible undun left off, but is far more inscrutable and meticulously composed. Some of the sung hooks, like that on "Black Rock," are way out of tune, but even those organic slip-ups feel beautifully intended. One song is nothing more than alternating fits of static and silence. This album will challenge every listener that approaches it, but if one can tolerate some of the more jarring moments, there is some real beauty to be found.

From subdued and desperate to joyous and ecstatic, Otis Redding's most critically-acclaimed album Otis Blue showcases the entire range of his vocal flexibility in just over 30 minutes. His vocals are so wildly entertaining that even the slowest numbers, like his "Change Gonna Come," are as gripping as the burners. The album is mostly covers of prior Motown and soul material with a few notable original compositions, such as "Respect," which Aretha Franklin would turn into a huge hit a few years later, adding in that famous "R-E-S-P-E-C-T" hook for her album titled ...

10. 'I’ve Never Loved A Man The Way I Love You' by Aretha Franklin

Aretha Franklin always sounds effortless — unfiltered, raw and overpowering even when she belts. And the songs she chooses on I’ve Never Loved A Man The Way I Love You just augment that power. It's easy to believe that respect, love and freedom are attainable social ideals when a voice as powerful as hers belts about them to you.

When Brian Wilson was writing the material for Pet Sounds, he was fascinated with The Beatles' Rubber Soul. He praised the album for creating a unified soundscape without filler tracks, covers or comedic studio banter — all of which were common crutches at the time. Wilson decided to take that inspiration and do it better by writing the "greatest rock album ever made." He isolated himself, took a lot of drugs and wrote out all his anxieties into some of the most transcendentally beautiful melodies and harmonies of any era. Paul McCartney took notice of Wilson's effort and declared "God Only Knows" to be the "greatest song ever written." That's not exactly the recognition was Wilson was going for, but it's a solid consolation prize.

12. 'Magical Mystery Tour' by The Beatles

While Magical Mystery Tour is nowhere near as good as some of The Beatles' other work in terms of perfection or even cohesion, it does show The Beatles at some of their most experimental moments. The album's second track "Flying" is one of the only instrumental tracks in their discography, and "I Am The Walrus" is by far one of their oddest. The bass line on "Baby You're a Rich Man" is one of Paul McCartney's greatest technical accomplishments. It's an an eclectic and unpredictable 36-minute listen that proves that The Beatles' could really do no wrong even if they only put in a fraction of the effort recording and arranging as they did with their other masterpieces.

The Dead Kennedy's Fresh Fruit For Rotting Vegetables is a staple of American punk music. The album takes the surf and rockabilly style popularized by the Ramones and adds in the political outrage and fuck-it-all attitude that defines the punk scene. One look down the tracklist and one can see there's a song for every occasion — "Let’s Lynch the Landlord" for when your sink is clogged, "Your Emotions" for when you're bickering with your significant other and "Viva Las Vegas" for when everything just gets to be too much and you just have to escape. There's a remedy for every possible frustration of modern life on this album. Listen and smile at all the ridiculous, snarling satire and enjoy your goddamn lunchbreak.