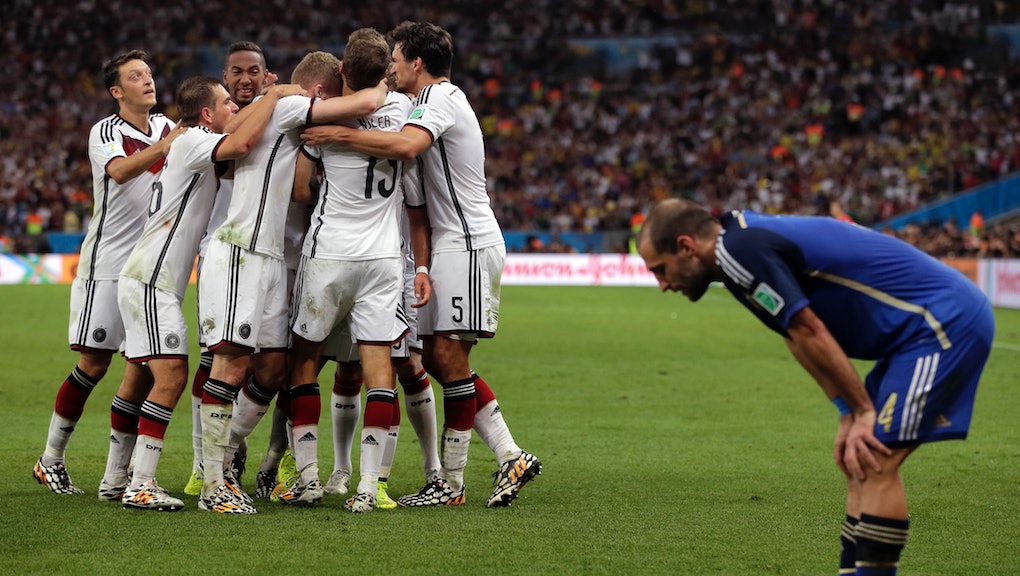 The Germans have crossed the Atlantic and conquered South America, winning the World Cup by outlasting Argentina in a 1-0 victory sealed Sunday with a brilliant 113th-minute finish by Mario Götze.

Late substitutions have yielded huge dividends throughout the World Cup, but none were larger than Joachim Löw's 88th-minute insertion of Götze. Here's a look at the tactics and formations that produced a worthy final to a memorable World Cup in Brazil.

How they set up

Argentina started the game in a 4-2-3-1 with Ezequiel Garay, Martín Demichelis, Marcos Rojo and Pablo Zabaleta across the back. Javier Mascherano and Lucas Biglia played in front of the back four with Enzo Pérez, Lionel Messi and Ezequiel Lavezzi playing more forward roles in the midfield. Gonzalo Higuaín started up top as the target player, a role he has played well throughout the tournament. Early in the game, Messi was effective getting forward and combining with Higuain, but as time wore on, he was pushed deeper into the midfield to receive service from Mascherano.

Germany started in a 4-3-2-1, transitioning to a 4-3-3 in the attack. Mats Hummels and Jérôme Boateng were again at center back with Philipp Lahm and Benedikt Höwedes on the outside. Bastian Schweinsteiger assumed the critical defensive responsibility of sitting in front on the back four and disrupting the Argentinian midfield. Toni Kroos and Christoph Kramer joined Schweinsteiger in the midfield; Kramer being a late addition due to first-choice midfielder Sami Khedira getting injured during warm-ups. Thomas Müller and Mesut Özil joined target Miroslav Klose up front for the Germans.

Tactically, both teams were similar in their conservative approach. The magnitude of the game and the fact the score stayed 0-0 through regulation meant both teams were tentative on committing numbers forward on the counterattack. The approach allowed Schweinsteiger and Mascherano to be the best players on the field for their respective teams. Both men operated out of holding midfielder roles to disrupt possession with timely tackles and constant interruption of passing lanes.

Germany's strength in the tournament had been getting their outside backs forward and committing numbers in the attack, creating mismatches and one-on-one opportunities out wide. The midfield play as a whole was slower in the buildup with more prolonged possession. The best defense in soccer is to keep the ball — keep it away from Messi and the Argentines couldn't score.

The Germans' tactic defensively throughout the tournament was to press high up the field, especially with the outside backs. Höwedes and Lahm were more selective on the runs up the flank in the final, especially after some early opportunities that were created by Higuain and Messi. Higuain missed the best chance of the game for Argentina when he pounced on a poor header by Kroos and put the ball wide of the net.

Fans were yearning for a wide-open final, hoping that both sides would attack with reckless abandon and that we would see a shootout at the Maracanã. Or perhaps an early goal that would lay waste to the conservative tactics both coaches brought into the match. Early goals have sent many a game in the 2014 World Cup into a frenzy of offensive soccer. But the Argentines reached the final by being the most organized side on the defensive side of the ball. Messi was forced to come deeper into the midfield to both help defensively and to get the ball offensively.

Right before the half, Messi worked some magic to turn the corner on the flank and get in to the near post. He was able to beat German goalkeeper Manuel Neuer, only to have his chance cleared off the line by Boateng. Early in the second half, Messi ran onto a piercing through ball, penetrated the two center backs and shot wide of the net again, a theme that would replay throughout the half. Argentina could not hit the target when there were clear opportunities to finish.

Substitutions made the difference

As the end of regulation neared, it was two German subs that began to push the pace offensively. André Schürrle (in the 32nd minute) and Götze (88th) created several of the Germans' best opportunities of the second half. Extra time started and Germany seemed energized by the break. Müller and Schürrle played a combination, ending with a Schürrle shot that forced a save from Romero.

Rodrigo Palacio entered at the 78th minute for Higuain and had Argentina's best chance in extra time when a failed clearance fell to him inside the box — but his lofted flick fell wide of the goal.

The game settled in the 113th minute when Schürrle carried the ball down the flank and bent in the perfect cross into the path of Götze. Mario took the ball off of his chest down to a fierce volley that rocketed toward the far post past Romero. It was a legendary strike that ended Messi's hopes of bringing the trophy back to Argentina after a 28-year drought.

What does it mean for the U.S.?

At the end of one of the best World Cups in recent history, we're left with one question relative to U.S. soccer: What have we learned?

The U.S. is now closer to winning a World Cup then they have ever been. No, not because they lost to Germany by the respectable scoreline of 1-0. Look at the way Germany won the tournament and Argentina made it to the final: defensive shape and organization, goalkeeping and timely finishing were paramount.

The U.S. played well defensively and has several young players who look to be the future of their back line, Jonathan Brooks being the most promising. The Americans have also shown a propensity to produce world-class goalkeepers, and Brad Guzan is next in line.

Clearly there is a gap in offensive talent right now, but as long as the U.S. Soccer Federation makes it a priority to produce and develop players like Julian Green to build toward the 2018 World Cup, there's no telling how far they can go.