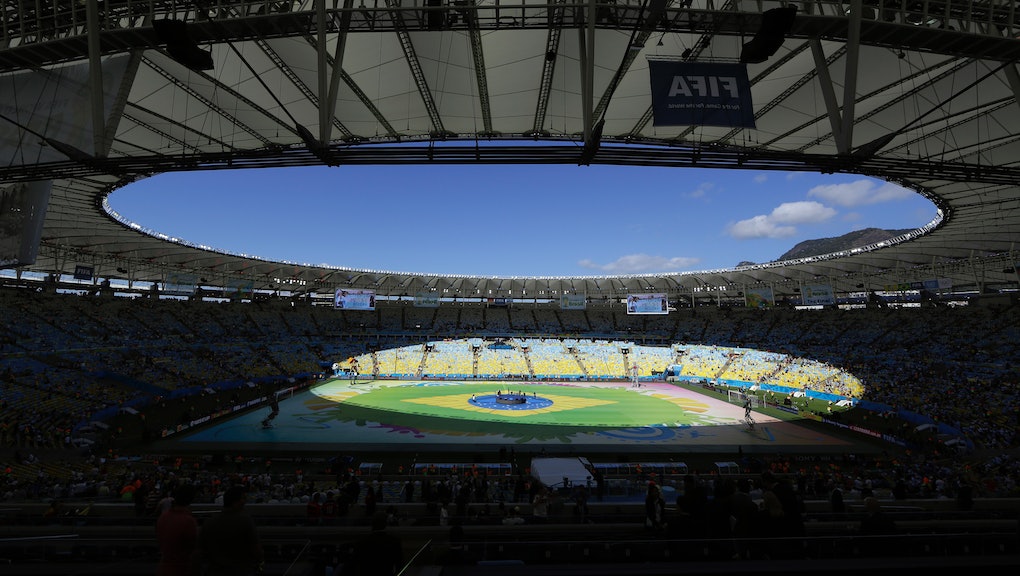 7 Big Problems the World Cup Left Behind in Brazil

In the lead-up to the World Cup, the spotlight shone on Brazil for the competition's disastrous preparation, which managed in many ways to make the glitzy event a PR nightmare.

The long list of controversies before the tournament's start included mass evictions, violent protests, police brutality and construction worker deaths. But now that the party is over, the buzz about the games is mostly good, and the problems that the media once covered with such concern are slowly being swept under the rug.

The 2014 World Cup was mostly considered a success, and as the teams made their way home to celebrate, it was easy for everyone to forget about the problems the games left behind.

Not everyone is forgetting. In a YouTube video that went viral, filmmaker and native Brazilian Carla Dauden listed the reasons she wasn't going to the World Cup. She talks about infrastructure issues and social inequality in her home country. A few days ago, Dauden released another video in the aftermath of the games, describing the problems that remain. Among them are protester deaths, debt and citizens who were evicted and live subject to strife and poverty.

It's easy to think that 7-1 was the most embarrassing number for Brazil, as their humiliating loss sent shivers through the spines of many fans. But Dauden reminds us there are other numbers at hand that tell us something about the state of the country, as opposed to the score of a game which has become a commodity.

Here are seven problems the World Cup has left behind in Brazil:

Thanks to the World Cup, more than 250,000 people were either directly or indirectly forcefully removed from their living spaces. Some experts say Brazilian politicians used the games as an excuse to clear out Brazilian slums and reclaim them. Eleven million Brazilians live in these slums.

The government compensated the evicted with only $22,000, not nearly enough to get by. The evictions mostly affect the poor because their property rights are not recognized by Brazil's legal system.

2. A country in debt

The total cost of the games was $12 billion, a price tag that many are convinced was not worth it, considering the social inequality plaguing the country.

Brazil spent billions on twelve stadiums, even though FIFA only requires a minimum of eight built stadiums. In the future, Brazil will struggle to fill the stadiums with enough fans. Experts say the projected boom in tourism is not expected to generate enough revenue to make up for the hefty price tag.

Demonstrations against the games' astronomical spending saw rampant police brutality. Citizens protested the government's clearing of the Brazilian slums in order to accommodate the games, as well as lavish spending on the games when there is already such a wealth disparity in the country.

Protesters questioned why the country would spend so much on soccer when so many Brazilians don't have access to health care and other basic needs. The Pew Research Center found in June that 61% of Brazilians were unhappy with hosting the event because they thought it took money away from other public services.

According to UNICEF, around 3 million Brazilian children ages 10 to 17 are victims of child labor. UNICEF emphasized the importance of protecting children from child labor during the World Cup, especially domestic workers, boys recruited by the drug trade and indigenous children.

While soccer has inspired many poor Brazilian children to follow their dreams, it has also strengthened industries using child labor and brought injustice to poor working families.

5. Increase in violence against sex workers

With the World Cup came an increase in violence and robbery against sex workers. The Observatory of Prostitution, an academic team affiliated with the Federal University of Rio de Janeiro, found that police raids closed prostitution establishments, forcing sex workers to bring clients back to their apartments.

"Now that we're taking clients to our apartments, a lot more of us are being assaulted and robbed… They take the women to the corner, say that they are going to do the trick in a hotel, and when they get to the corner they assault them," said one sex worker.

Studies show that prostitution may have decreased during the World Cup, but police brutality against prostitutes increased due to a movement to wipe away Brazil's reputation for sex work.

Brazil rushed the construction of its stadiums, which meant the neglect of proper safety precautions. During the stadium's construction, at least eight construction workers were killed.

7. A legacy of social unrest

The #NotGoingtoBrazil hashtag gained steam in the months leading up to the games. Brazilians and people all around the world used it to protest the unnecessary funds used for the games that could have been used for hospitals, health care and other facilities for Brazil's 16 million people who live in extreme poverty.