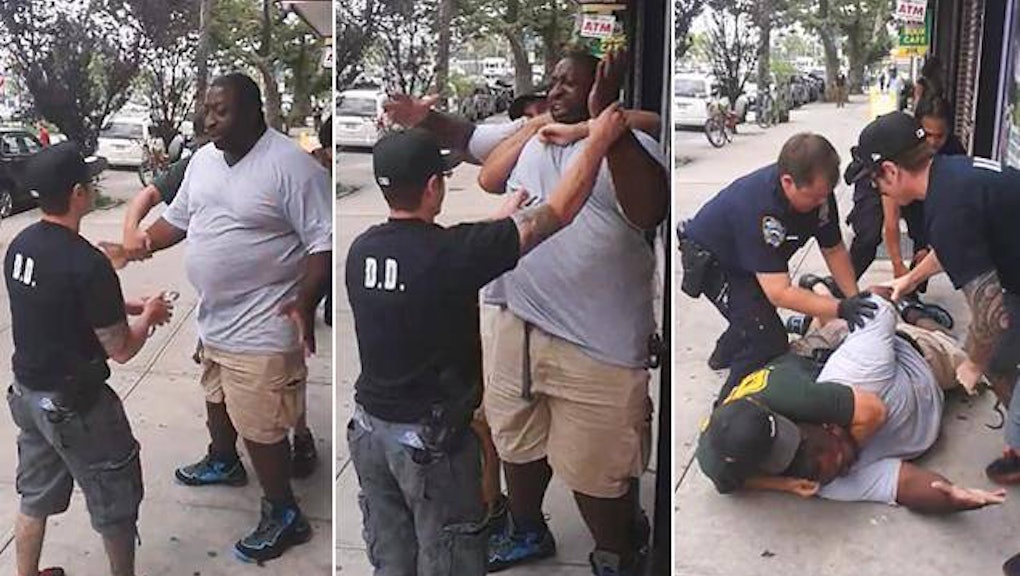 The news: A confrontation between five NYPD officers and an unarmed Staten Island dad ended in the worst way possible on Thursday: the man's death.

Eric Garner, a 400-hundred-pound, six-foot-four, asthmatic father of six was trying to break up a fight, witnesses say, when officers moved in to apprehend him. A video of the encounter shows police officers choking and smothering Garner, who soon after appears to be unconscious. An NYPD spokesperson later confirmed that as Garner "was being placed in custody, [he] went into cardiac arrest and died."

Cops then move in on Garner, lowering him to the ground, forcing his head into the concrete and placing him in a chokehold, a move that's against department policy. Garner then screams "I can't breathe!" repeatedly until passing out.

Garner was facing charges of pot possession and selling untaxed cigarettes and was due in a Staten Island court in October. Garner's family is adamant he didn't have cigarettes with him at the time of his death.

The NYPD announced Saturday night that officer Daniel Pantaleo, an 8-year veteran, has been stripped of his badge and gun and placed on "modified assignment," pending the outcome of probes by the district attorney and Internal Affairs.

The NYPD has been racking up a list of gross misconduct this year. In late April, three NYPD officers got drunk and shot three separate people in three separate incidents.

And a few weeks earlier, in a 27-hour span, three different cops received DWIs, in addition to "one reckless driving charge and one accident followed by a refused Breathalyzer."

Proven by the latest news of Garner's untimely death, alcohol isn't the only problem for officers. Police incompetence is a growing trend all across the country.

With half of Americans saying they mistrust police conduct and only 25% of people reportedly having a "great deal" of confidence in law enforcement, police need to be more accountable for their actions.

Internal affairs is launching an investigation into the wrongdoing involved with Garner's death. Even Mayor Bill De Blasio acknowledged that the officers failed to do their job of serving and protecting New York City residents. Still, an internal investigation and the Mayor's condolences are not enough — putting a stop to the misconduct entirely is.