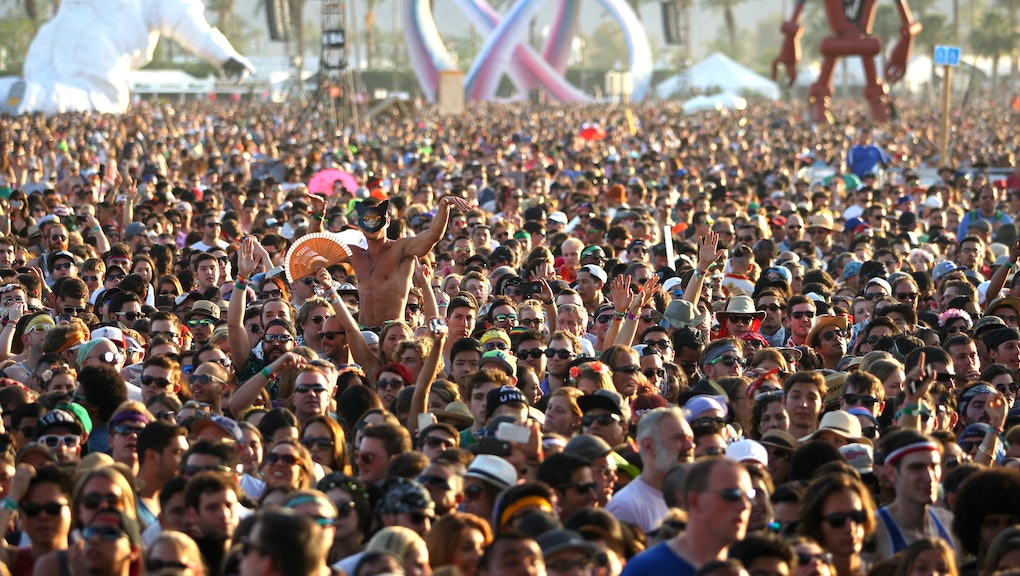 The news: This year's Bass Coast Festival in British Columbia, Canada, will feature plenty of this:

And some of this:

But absolutely none of this:

According to a Facebook announcement posted Wednesday, the organizers have banned Native headdresses, a decision that's drawn praise from indigenous advocates across North America.

Why? "For various reasons," the announcement reads, "Bass Coast Festival is banning feathered war bonnets, or anything resembling them, on-site. Our security team will be enforcing this policy."

Plus: "We understand why people are attracted to war bonnets. They have a magnificent aesthetic. But their spiritual, cultural and aesthetic significance cannot be separated."

The announcement concludes: "Bass Coast Festival takes place on indigenous land and we respect the dignity of aboriginal people. We have consulted with aboriginal people in British Columbia on this issue, and we feel our policy aligns with their views and wishes regarding the subject. Their opinion is what matters to us."

Simple as that: It's troubling that "respecting the dignity" of indigenous people remains such a rare occurrence, but in truth, few other festivals have taken this step. California's Coachella Valley Music and Arts Festival still receives special heat for documented instances of Native appropriation, to the point of being widely associated with the practice.

Ian Campeau, aka "DJ NDN" of the Ottawa-based aboriginal EDM collective A Tribe Called Red, has spoken at length about tribal headwear at his own concerts.

"We, as First Nation people, have never had control of our image in colonial media since its birth," he said. Such practices therefore create "a false idea of what it means to be Indigenous today ... robbing the First Nations of their nationhoods and nationality ... [and] making us all 'Indian' instead of recognizing me as an Anishnabe or Ojibway."

More: The Lighting in a Bottle Music Festival in Bradley, Calif., came close to barring the practice this year. But it stopped short of an outright ban, instead devoting a section of its website to discussing the issue and its implications.

Part of it reads, "Taking off the headdress is about respecting the realities faced by Native Peoples today," and goes on to describe how "sporting that headdress means being a walking representative of 500-plus years of colonialism and racism, perpetuating stereotypes that Native people have been fighting against for just as long."

Lightning in a Bottle takes place on Chumash land, lending extra weight to its attempts to discourage the habit. But its ethos should be universal: No matter who you are, the traditional attire of indigenous groups — or any group, really — is not your personal invitation to play "dress-up."

The example set by Bass Coast and its organizers should be emulated across the cultural spectrum, from high-profile celebrities to professional sports organizations and anyone in between. Native appropriation practices have persisted far too long. It's time to wake up.