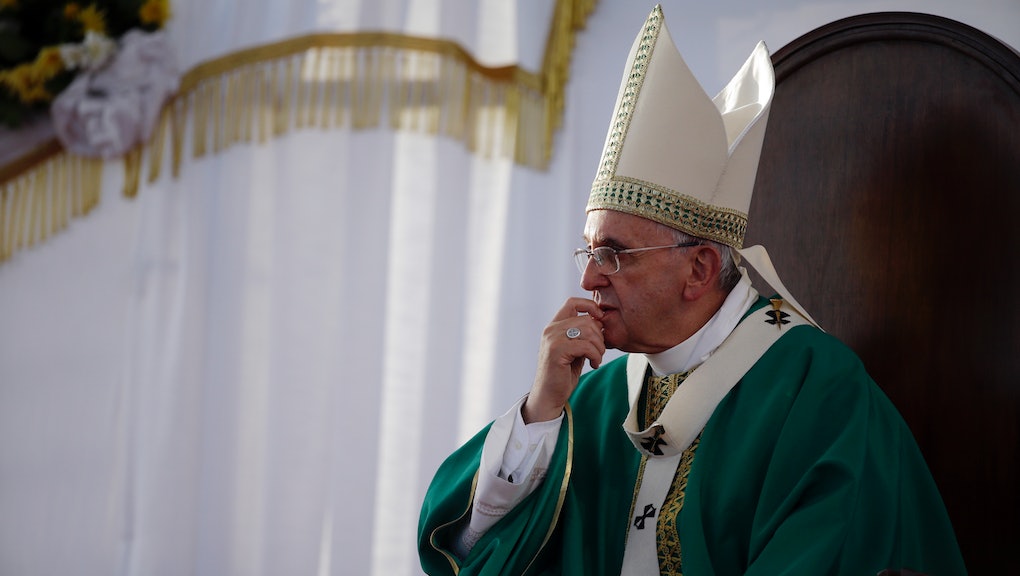 Pope Francis Has a Strong Message for Israel and Palestine

That's what Pope Francis said in an emotional plea on Sunday during his weekly Angelus address in St. Peter's Square in reference to the myriad violent conflicts happening right now around the globe. Nearing the end of his address, Francis said his thoughts were about the Middle East, Iraq and Ukraine as conflicts continue to ravage these places.

"Please stop! I ask you with all my heart, it's time to stop. Stop, please!"

The remarks were not part of Francis' prepared speech, but seemed to come from a more personal, emotional place, as evidenced by a slight crack in his voice as he said them.

"Brothers and sisters, never war, never war! I am thinking above all of children, who are deprived of the hope of a worthwhile life, of a future," he said.

Though Francis didn't make any direct reference to the current conflict in the Gaza Strip, they did come right after a planned truce in the Israel-Palestine conflict fell apart as fighting commenced in what has already claimed more than 1,000 lives, including dozens of children.

Vatican in the peace process. Of course, Francis has no tangible power to affect the situation in Gaza, but his influential voice speaks volumes. In the past few months, he's made similar moves, such as inviting Muslim and Jewish religious leaders to pray together in the Vatican in an attempt to foster a peaceful dialogue. He also made headlines in May when he rested his forehead against the graffiti-covered concrete structure that separates Bethlehem from Jerusalem and prayed for peace.

The Vatican has generally been quite vocal in the Israel-Palestine conflict, with the past several popes making numerous attempts to foster peace in the region. Of course, Francis' most recent comments speak more broadly to the various violent conflicts raging throughout the world, but it's probably safe to assume he had an eye on the violence raging in the Gaza Strip right now. And even if he can't directly influence the situation, by at least alerting his millions of followers to the conflicts, more people will become aware of how bad wars have become, and that's a step in the right direction.