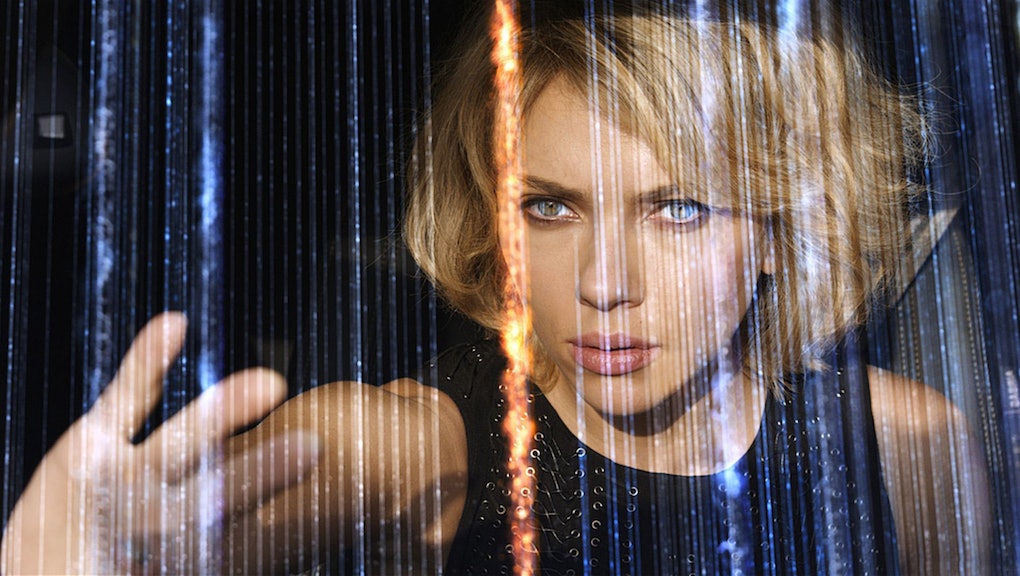 There's One Number Every Hollywood Executive Needs to See This Summer

That's not Johnny Depp's paycheck for Pirates of the Caribbean 5 or the marketing budget of the latest Marvel feature. It's the amount Lucy pulled in at the U.S. box office over its opening weekend. That's right, Lucy, a female-led action film starring Scarlett Johansson, beat out the weekend's anticipated winner Hercules, a male-led action film starring Dwayne "The Rock" Johnson.

If Hollywood execs needed more evidence that female-led films have what it takes to win with audiences, let this be the proof.

Lucy, directed by Luc Besson, stars Johansson as a woman implanted with a drug that unleashes the full power of her brain, making her into some sort of super-human action hero. If that sounds like a bit of a narrative stretch, it is. The film only received a 58% fresh rating on Rotten Tomatoes and likely won't be making any top 10 lists this year. Even so, it managed to squash Hercules (which made $29 million last weekend, for comparison).

So how did Lucy beat a male-centric action film featuring a bonafide star?

Some have pinpointed Lucy's success on its massive marketing campaign and its slick trailer, which emphasizes action elements. And others say Lucy is only a success because of the weak field of summer contenders. After all, even though Hercules stars the Rock, it had a relatively small budget (if you consider $100 million small) and it isn't a sequel or based on a comic book.

But there's one other number that helps explain Lucy’s $15 million dominance over Hercules: 50%. That's the amount of Lucy’s audience that is female.

There remains a belief in Hollywood that women can't drive major box office success, with YA adaptations being the obvious exception. But, when a film like Lucy not only wins the box office but does so over male-centric fare, it should be enough to make the studios stand up and take notice.

What's more, 50% of Lucy’s audience were men. And it's hard to believe that all of those men were dragged there by women. This flies in the face of time-tested Hollywood logic that men don't want to see films with women in the lead.

With these sorts of numbers, the future of women in film should look bright. After all, along with Lucy, this has been the summer of Maleficent, and the success of The Heat last summer opened the door for films like Tammy.

And yet Hollywood is still not getting the message. Look to the Mecca of blockbuster film, San Diego Comic Con, for proof. Hollywood studios have scheduled most of their major blockbusters for the next few years, from The Avengers 2 to The Justice League. What is conspicuously absent is a female-led franchise that doesn't star Katniss Everdeen. There will be no solo Wonder Woman film, Black Widow is still just a supporting character and a Mystique film seems to be a pipe dream.

"The best female roles are in television at the moment. Katniss Everdeen — as popular as she is — is an anomaly," Game of Thrones' Natalie Dormer told the panel on Kickass Women at Nerd HQ. And she's right. In film, women are not seen as viable leads that can support box office success.

Hollywood execs continue to ignore the fact that films featuring female characters continually perform better than those that don't. And yet, women buy more than half of the movie tickets sold in the United States, so it should come as no surprise that when women are given the chance to lead a film, those films do pretty well.

Let Lucy serve as the example to Hollywood that women-centric fare is just as financially viable, if not more so, than what they're currently churning out.