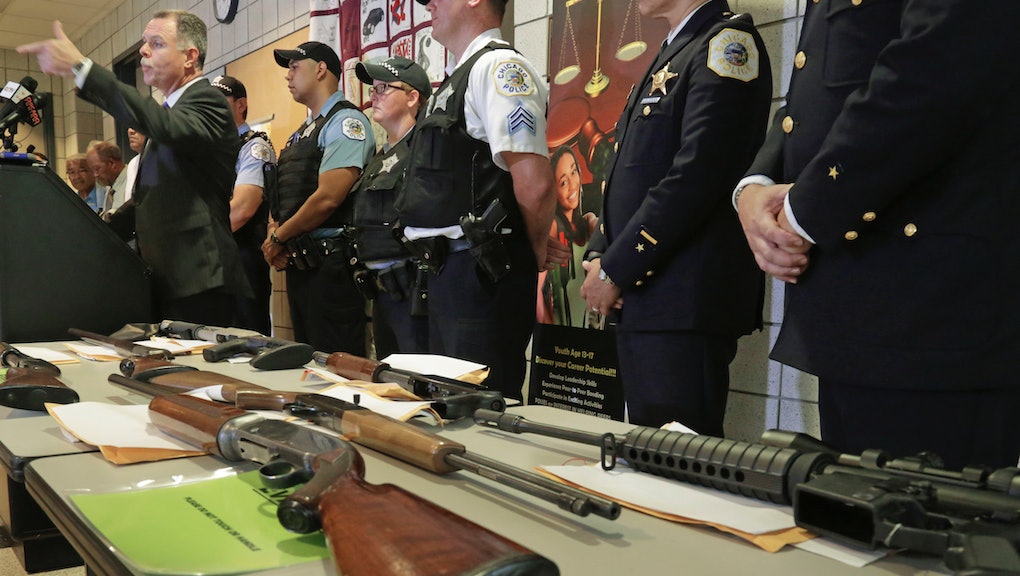 According to newly released documents, a staggering 662 Chicago Police officers had at least 10 misconduct complaints brought against them from 2001 to 2006.

That’s no small figure, even for America’s second-largest police force. And paired with the avalanche of misdeeds tagged to the NYPD of late, it deals yet another crushing blow to public trust in our nation’s cops.

According to a 2011 Gallup poll, 29% of Americans have "very little" or "no" confidence in the criminal justice system, while just 28% express a "great deal" of confidence.

Though the negative numbers aren't the highest they've been, it's telling that a 42% majority maintain only "some" faith in a law enforcement apparatus tasked with administering justice.

Meanwhile, brutality incidents from Los Angeles to Knoxville raise added questions about the “wildly inconsistent” outcomes of internal regulation, according to NBC. A public opinion poll from the Libertarian-leaning Reason Foundation claims that 50% of Americans believe police officers aren't held accountable for their misconduct.

This is notably appropriate in Chicago, where persistent gun violence can overshadow the police department’s internal woes.

But the publication of this list shifts the spotlight back toward uncovering just how bad these officers can get, and how committed their superiors actually are when following up on citizen complaints.

The numbers: Even a cursory scroll reveals troubling patterns.

To start, the numerical code “600” indicates that “no action” was taken to discipline an officer after an allegation. Imagine how disturbing, then, to see a 55-item dossier of misdeeds attributed to one cop, paired with an entire column of idle “600s.”

In select cases, the officers were found innocent. Yet according to the Sun-Times, internal investigators sustain less than 1% of police misconduct complaints in Chicago – far lower than the national average.

Doesn’t that just mean the cops are clean? Not likely. Consider the list’s top four names, all members of the department’s Special Operations Section that was disbanded amidst corruption allegations in 2007.

Among them are Keith Herrera and Jerome Finnigan, both eventually arrested and convicted of “home invasions and rip-offs of drug dealers” in 2011. Together they accrued 105 citizen complaints over the five-year period, in addition to appearing on a separate list of officers with five or more “excessive force” allegations between 2002 and 2008.

Only one of these incidents spurred departmental action: Herrera received a “reprimand” in 2003.

Until Tuesday, city officials had withheld the documents despite multiple attempts to make them public. Only after a lengthy court battle were they obtained and published by independent journalist Jamie Kelvin. The Chicago Sun-Times wrote about it shortly thereafter.

It’s bad enough when cops are accused of misconduct, but even more troubling when a police department refuses to adequately investigate the allegations. Add that to a city that spends years in court denying public access to the documents that expose the issue, and it begs the question: Who exactly are these people “protecting and serving”?