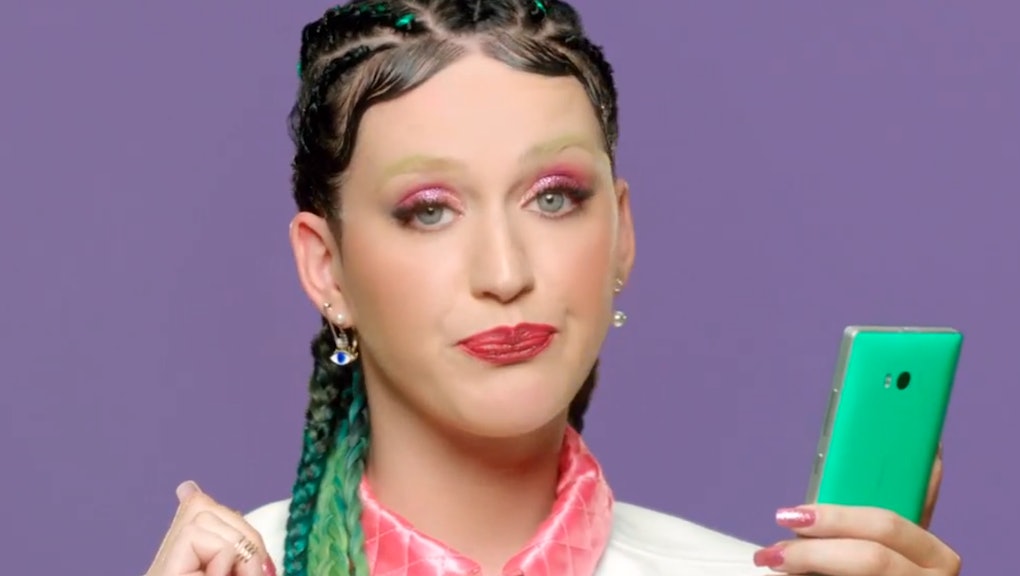 The "Dark Horse" singer, who has gotten in trouble in the past for her tasteless appropriations, clearly hasn't been getting the messages — as evidenced by her most recent "This Is How We Do" music video, which coincided with her July 30 cover story in Rolling Stone.

In that interview, the 29-year-old artist was asked about cultural appropriation and how she's been called out for it by numerous people of color. Brushing off the criticism, Perry defended herself and argued that her intentions were pure. It's the perfect example of what happens when you take a clueless person with a heaping helping of white privilege and precious little substantive awareness of it.

"I guess I'll just stick to baseball and hot dogs, and that's it," Perry said. "I know that's a quote that's gonna come to fuck me in the ass, but can't you appreciate a culture? I guess, like, everybody has to stay in their lane? I don't know."

Earth to Katy Perry: Cultural appropration is not flattery or appreciation. It's offensive and disrespectful to your fans, many of whom are having a hard time still liking you, since they're disappointed by a string of racist stereotypes.

Her newest video is only the tip of the iceberg, however.

This isn't the first time — and it probably won't be the last — that Katy Perry is seen perpetuating racist tropes in a music video, a concert or an awards show performance. The following are some of Perry's most egregious examples:

"This is how we do it" is an expression first popularized by black R&B singer Montell Jordan's hit 1995 song of the same name. The phrase has since become part of much more common vernacular, but it has black cultural roots, which makes Perry's behavior in her new video associated with the term all the more disrespectful.

Perry is first seen in the video reclining while wearing a long, dark, braided ponytail, holding up a watermelon and chucking up "deuces." Playing into the tired trope of African-Americans being fiends for fried chicken and watermelon, Perry's hairstyle and expression meanwhile can be traced back to the cultural expressions of many black women in America.

Not content to stop with African-American stereotypes, Perry goes on to  perpetuate the stereotype that all manicurists at nail salons are Asian people with the lyrics:

"Now we're talking astrology, getting our nails did all Japanese-y."

Perhaps the worst moment of the video comes during the song's bridge, when Perry stops singing and starts talking in a voice completely not her own. It's that oh-so-dreaded "blaccent" that's becoming the new hot trend in pop music, spearheaded by Iggy Azalea.

Doubling down on this attitude, Perry then dons cornrows with gelled down baby hair and painted fingernails while she responds to a message from an apparent frenemy, "Jessica Thot." ("Thot" is a slang acronym that translates to "that ho over there.")

When Perry opened the show last fall at the American Music Awards, viewers around the globe witnessed her clueless racism firsthand in a performance of "Unconditionally" apparently inspired by Japanese culture — and perhaps an unhealthy fascination with geishas.

During the performance, Perry donned what many termed "yellow face" while dressed up as a geisha, culturally appropriating and misaligning a portion of Japanese entertainment typically performed in a much more socially aware context.

"Between the lack of Asian women on stage, the heavy-handed use of bowing and shuffling around in the choreography, and the ethno-confused set and costume design, Perry presented her viewers a one-dimensional Eastern fantasy drawn by a Western eye right out of the gate," wrote Mic contributor Phyllis Heitjan at the time. Heitjan, who is half-Korean, added that the tropes Perry plays up are the ones that get her exoticized via Orientalism on a routine basis in the dating world.

"Perry's "geisha" get up is a flat, inaccurate, sexualized identity that has nothing to do with Asian cultures," she said. "She pandered to a white audience by all but literally skinning Asian women."

In the video for "Dark Horse," Perry runs amok with appropriation of a different kind, cavorting in anything that looks or feels like it could be inspired by Ancient Egypt. In the process, she turns an entire cultural and ethnic identity into a costume.

In a new twist, Perry adds even a degree of racist and Westernized condescension in the video, as it's associated with the theme of "playing with magic" present in the lyrics and performed in the video via the apparent members of an Egyptian queen's court.

The problem here lies in the fact that Perry thinks it's acceptable to use another country or ethnic group's culture as a costume or as a prop, let alone for one of her countless bubblegum pop songs. This mocks and stereotypes a country and its people for the sake of pop music. (This has been done before, notably in the 1986 hit "Walk Like An Egyptian," which essentially popularized a new stereotype about Egypt and Egyptians based on cultural borrowing that wasn't at all cognziant of historical context.)

The same dynamics operate within Perry's heavy use of the imagery and even ancient Egyptian cultural dynamics in "Dark Horse." Problematically, everyone in Perry's court, including her servants, appear darker than she is. Their blue paint and rags, juxtaposed to Perry's pristine, white skin and royal attire, highlight the racial disparities in high-definition clarity.

During a 2010 trip to the Coachella Music Festival, Perry wore her interpretation of what a Native American woman dresses like. She even posed for cameras, allegedly playing into the "hand to mouth" communication technique often seen as a trope in Country Western-style flicks.

Native American appropriation is one of the earliest, most insidious forms of racist cultural theft in America. In fact, it's become such a problem that recent conversations have emboldened various advocates to call for major sports teams to retire "Indian" mascots and team names such as the Cleveland Indians. Music festivals are also starting to address the issue, with the Bass Coast Festival announcing a new ban on any headdresses spoofing the otherwise authentic, sacred creations of Native American spiritual leaders and tribespeople.

5. Bopping around with black women's butts.

Because it's not enough to just hire black women who can dance, Perry had a pack of very curvy black women dressed as mummies parading around her during a recent concert performance in London. These back up dancers were all outfitted with exaggerated red lip paint, likely done for artistic purposes, but also bringing to mind perceptions of black people as having relatively bigger, fuller lips than Caucasians and other ethnic groups.

Black female bodies and curves have been misaligned by whites for centuries. This practice dates back to slavery. This type of portrayal, in particular, hearkens back to the Hottentot Venus, a racist, real-life display that exoticized the curves of a young African woman sold into slavery and renamed Sarah Baartman. During the early 19th century, she stood on display in a public squares all across Europe for people to see. After passing away at age 25 to venereal disease, Baartman was dissected and her body was preserved so that she could remain on display for decades. Advocates were able to lay Baartman to rest on International Women's Day 2002, 187 years after her death in 1815.

Maybe the next time Katy Perry wants to dismiss claims of being a cultural appropriator, she should instead take a quick trip to the library — along with her art director, costume designer and anyone else on her team convincing her that this kind of behavior is "artistic."

Because it's not — It's racism.